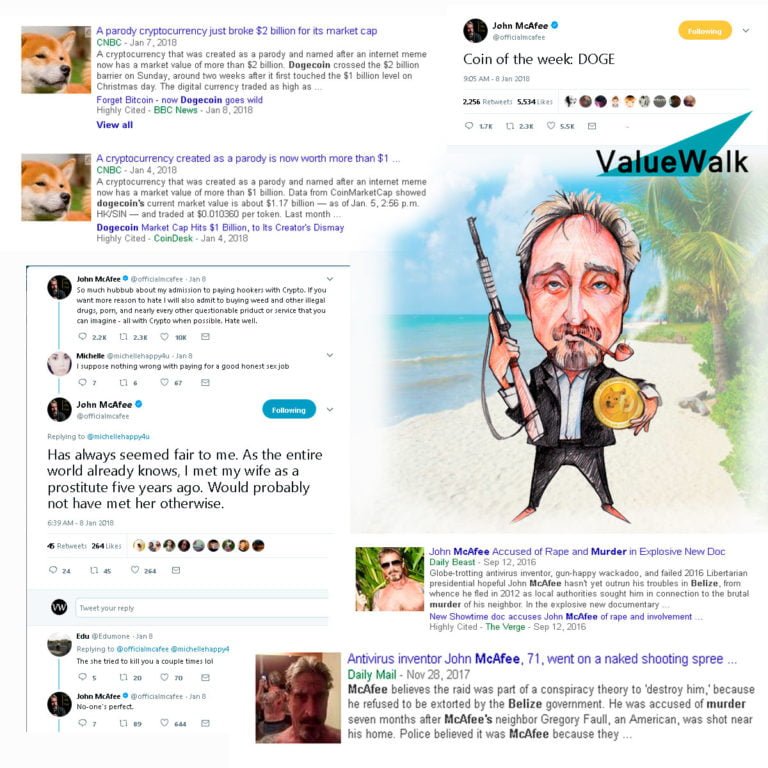 This week, finder.com’s Weekly Coin Analysis found that $94.1 billion has been traded in crypto over the past seven days. This is a 6% drop since last week’s Analysis, but we’ve seen a somewhat steady decline since the Weekly Coin Analysis started on April 30, 2018. In that first report, $190.8 billion had been traded over the previous seven days – this is a 51% drop.

Out of the 1,586 coins analysed, Beatcoin saw the greatest growth in price by 240% from its price a week ago. Wink followed close after with a 201% increase, then FLiK with 198%.
Utrum and Super Bitcoin are among the coins with the greatest falls in price, dropping 95% and 91% respectively. Interestingly, Super Bitcoin was amongst the winners of last week’s Weekly Coin Analysis, jumping up 650% in a week.
Out of the top 100 coins, John McAfee backed Docademic saw the greatest price growth over the week at 26%. Centrality and Basic Attention Token also saw growth, price increasing by 14% and 12% respectively. WaykiChain had the greatest decrease in price, losing 44%. This is the second week in a row WaykiChain has had the biggest fall out of the top 100 coins, after dropping 34% in last week’s Analysis. Check out more of the findings below.
For immediate release, Tuesday, June 26, 2018, Sydney, Australia – Global personal finance comparison site finder.com has released its Weekly Coin Analysis of all 1,586 coins available on CoinMarketCap. The total volume traded over the past seven days is down by 6%, but it’s a 51% drop since April 30, 2018, when this Weekly Coin Analysis was first released.
The total volume traded in cryptocurrencies over the last seven days was $94.1 billion, compared to the $190.8 billion traded in the April 30 Analysis.
The vast majority of coins – 83% – dropped in value over the past seven days to June 25, 2018, compared to the 76% from the previous report. The coins that decreased in price decreased by an average of 19%.
Each week, finder.com will analyze the performance of these coins, including a seven-day change in value and growth of coins, trade value change, and market capitalization. A separate analysis of the top 100 coins by market cap has also been included in the weekly report.
All prices listed are in US dollars unless otherwise specified.
Key Findings: 1,586 coins analysis
Bitcoin took out top spot with the highest volume traded at $28 billion, followed by Tether at $18.3 billion. This is still the lowest total amount traded for BTC in one week since we launched the Weekly Coin Analysis eight weeks ago.
Regarding percentage growth, Beatcoin saw the biggest increase in price, by 240% to $0.0535, while Utrum saw the biggest drop in price, by 95% to $0.0050.
Top 5 biggest 7-day increase in price by percentage growth (USD)

Regarding percentage growth by market cap, OP Coin saw the biggest increase in market cap, by 657% to $1.06 million, while Cabbage saw the biggest drop in market cap, by 75% to $25,156.
Endor Protocol saw the biggest increase in rank position. Endor Protocol’s rank increased by 1,199 spots to 194, while FairCoin saw the biggest drop in rank, by 713 spots to position 995.
Key Findings:  Top 100 coins by market cap
Out of the top 100 coins, Docademic saw the biggest increase in price, by 26% to $0.2984, while WaykiChain saw the biggest drop in price, by 44% to $0.5709.
As for the market cap, KuCoin Shares saw the biggest percentage increase over the past week, shooting up 62%.
The full details of the analysis, including data tables for all measured areas of performance, can be viewed here: https://www.finder.com/weekly-coin-analysis-18-25-june-2018
Comments from finder.com co-founder, Fred Schebesta:
“This week we’re seeing another drop in the total volume of cryptocurrency traded. Despite being down only 6% from last week, this is a 51% drop from the first time we released this Weekly Coin Analysis report in April. The only positive growth we’ve seen since April was in the May 25 Weekly Coin Analysis, where the total volume increased by 2%. The reason for the declining trade volume is because coin values have fallen – this week alone we’ve seen 83% of the 1,586 coins drop in price. And they may drop further before we see them pick up again.
“Docademic saw the biggest percentage increase in price over the past seven days. This is a relatively new coin which started trading in May, but has the backing of cybersecurity pioneer John McAfee. It has a strong use case in the medical sector and I expect we may see prices continue to rise as the launch date for its app approaches.”