ValueWalk
Home Economics Contagion starts with the weakest links in the chain — just like... 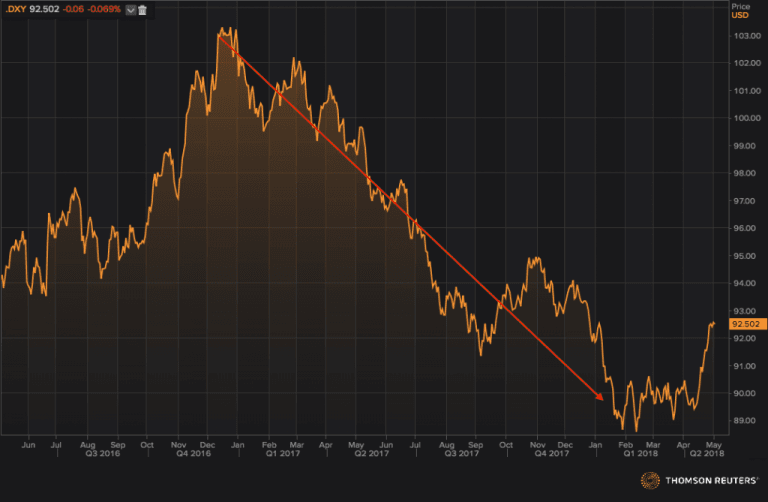 Here’s a supernova, an imploding star.

It’s a curious thing. As it collapses and dies it sucks in EVERYTHING, burning the brightest it’ll ever burn.

In our global financial system that centre is the US and in particular the good ol’ US Dollar.

Consider that the greenback still wears the king’s robes. Namely:

Here’s the dollar index. A poke in the eye with a sharp stick for dollar bulls for all of last year.

Looking at this chart one would be forgiven for thinking it similar to the path of Enron stock after Skilling’s famous “asshole” comment.

In other words, the path into an eternity… forever-and-ever, amen. Let me caution you on that, and not just because linear thinking in a dynamic world may just kill you.

The arguments for a decline in the dollar are far from stupid ones. Indeed, they’re grounded in logic and well deserving of our attention.

The U.S. has a narcissistic president, who scares the hell out of the rest of the world and increasingly those who elected him.

He’s being compared on social media to Hitler, and he in turn placates those who’re a tad worried about his antics by taunting “Vlad” via twitter that he’s some “shiny new missiles coming his way”. So yeah, I get it. He’s a bit of a loon, certainly dangerous, probably ill-informed, and scarily probably better than Hillary would have been.

Such is the state of affairs, but as I mentioned before, he promised to be a wrecking ball and now he is one. That’s surprising because, let’s face it, politicians promises on the campaign trail are typically as long lasting as ice-cubes in the oven. And so who in their right mind would want to own the currency of a country run by an intellectual toddler?

But here’s the thing. None of this is news to anyone, least of all markets.

And then there’s the financial reasons. Again, all very good ones.

And these are, of course, the sort of numbers that make blood shoot out of our eyes and have us reaching for the Xanax.

But again, these are things the market knows full well. None of this is a secret. And as such it’s got every man, his dog, cat, and uncle in on the trade. In fact, you can’t turn around today without bumping into a dollar bear.

And if we ever needed further evidence this is the case we can see this in net positioning in the futures markets where dollar shorts have been at historically high levels for much of the last few months. 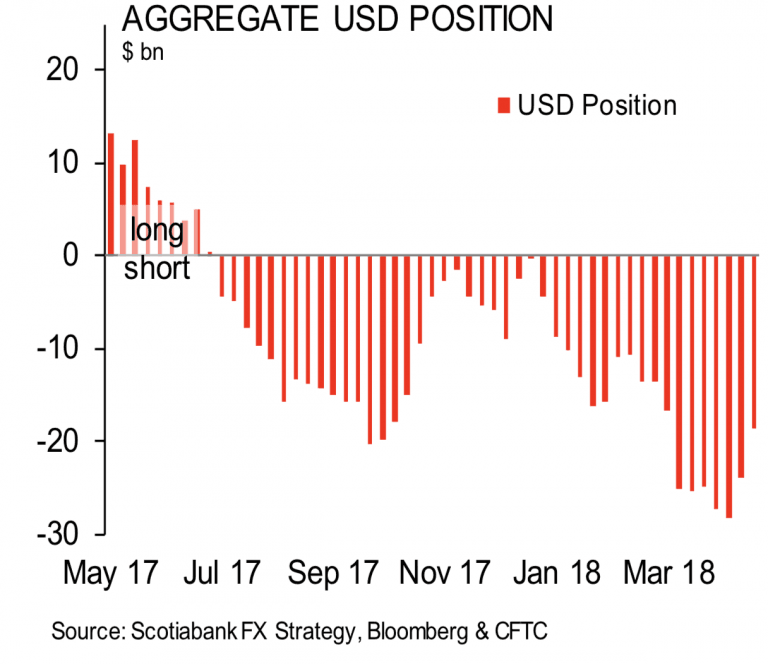 So now let me throw cold water on the bear case, and maybe toss a few ice cubes down their trousers, too.

Some US$2.6 trillion of offshore funds are in the process of taking advantage of a one-off 14% tax holiday.

Apple to incur $38bn US tax bill as it repatriates Irish cash pile https://t.co/rilUyUjhsG via @IrishTimesBiz

The Bank for International Settlements (BIS) says offshore dollar funding has risen to US$10.7 trillion since the early 2000s, with a further US$14 trillion of global dollar debt hidden in derivatives.

Now, when you consider a five-fold increase in debt priced at 5,000-year lows, the room for error is right up there with this guy.

We also know that the rise and fall of the dollar is the major cycle of dollar liquidity, which has and is driving the world’s investment appetite and global asset prices. This liquidity spigot is now clearly being turned off. That’s NOT dollar bearish.

And now the Fed have been increasing the Fed funds rate, which, I’ll remind you, decreases money supply, making dollars more expensive to borrow.

So let me ask you a question: what do you do if you’ve large dollar funding obligations in this environment?

I’d say you move to reduce risk, and that means buying back dollars and closing out existing dollar obligations.

A feedback loop can very quickly ensue and it’ll feel like hell to those caught on the wrong side of this. Which is fine.

I mean, sometimes we need hell. Sure, its exports suck but they’re sort of there to teach us a lesson.

Politicians, the Kardashians, the postal service, social justice warriors, brussels sprouts, baggy trousers… all notable exports of hell. But while we’ll have many of those exports for an eternity the coming dollar rally may actually set the stage for its ultimate replacement, so we’ll not be stuck with it forever.

But we can’t get there until we’ve an alternative. And that, my friends, doesn’t exist yet.

So we are where we are and we have to deal with what we have in front of us.

And it looks to me like we’re on the cusp of something big. Take a look: emerging markets debt is coming under pressure right now. 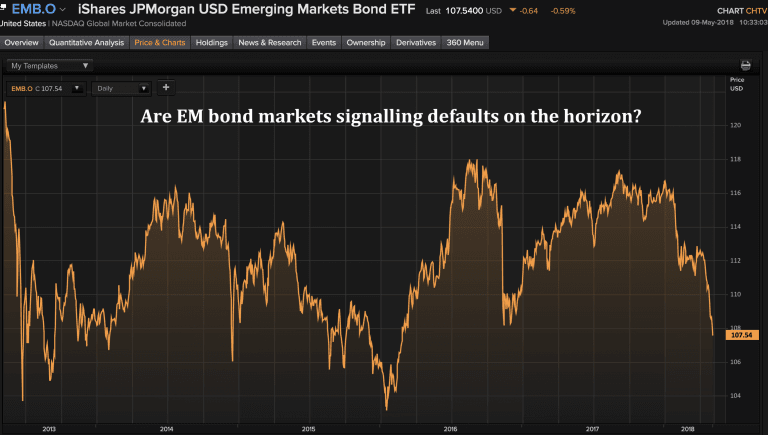 And take a look at some of the EM currencies: 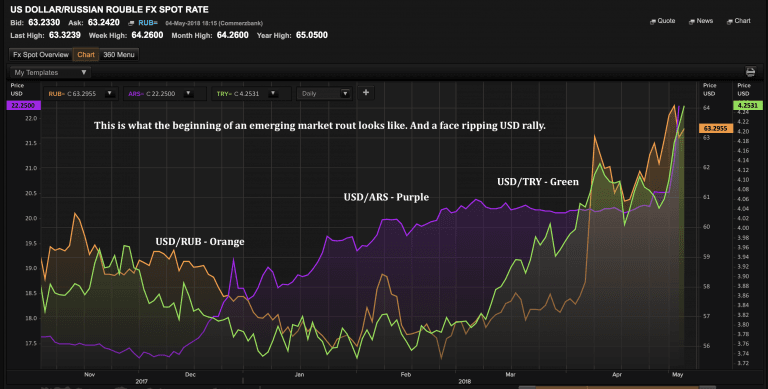 Sure, you could chastise me for picking on the weakest in the bunch but that’s the thing about how contagion starts: with the weakest links in the chain. You start pulling at the loose thread on the sweater and soon the whole thing unravels.

Contagion starts with the weakest links in the chain — just like pulling at the loose thread on the sweater… and soon the whole thing unravels. Click To Tweet

When the pointy-shoed crowd realise they’re “overweight” EM and EM currencies, the selling will be indiscriminate, which will set off the algos programmed to sell anything exhibiting volatility beyond some predetermined metric. And as those circuit breakers trigger there won’t be enough dollars to meet demand.

It feels like right now we’ve a perfect setup for what nobody expects: a much, much higher dollar.

“Where all think alike, no one thinks very much.” ― Walter Lippmann