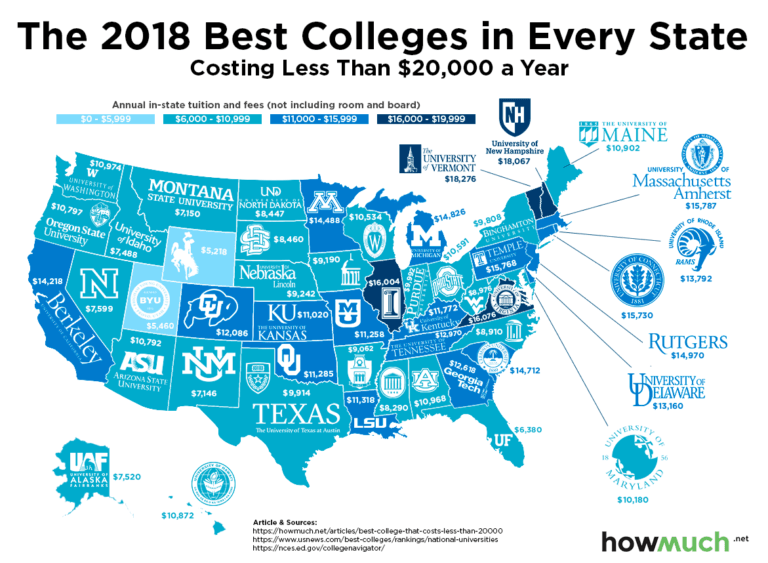 Here’s a fact: more than 70% of college graduates carry student loan debt, and the average debt burden stands at $37,172. A surprising new study reveals that the problem affects millennials just as much as baby boomers. These figures got us thinking about the best schools that won’t break the bank, so we compiled a new map of the top universities in every state costing less than $20,000 in annual tuition and fees.

We compiled the data from U.S. News & World Report’s annual Best College Rankings. We captured the top-ranked college in every state costing less than $20k each year in tuition and fees (excluding room and board). We then color-coded each state in a heat map to represent the relative cost of the best higher education—light blue states are cheaper than dark blue states. We added the school’s logo for quick reference. This snapshot lets you quickly and easily see where getting a degree at a reputable institution costs the least.

There are a couple of caveats to keep in mind. Many public universities charge different rates for students who already live in that particular state and students who live in another state. For example, the University of Iowa will only charge Iowa residents $9,190, but the school will charge nonresidents $30,834, or more than three times as much. It’s worth noting, however, that some universities have reciprocal agreements with other states, where they agree to charge the resident tuition rates for nonresidents, like the agreement between Wisconsin and Minnesota. In other words, don’t automatically assume you can or cannot pay the tuition rates listed on the map. It always pays to check.

In fact, most people don’t even pay the published tuition rates. Fully two-thirds of college kids receive some sort of financial aid in the form of scholarships or grants. That means that if you can combine a scholarship with a low tuition bill from one of these schools, you will be in the best possible position to escape student loan debt altogether.

All that being said, there are several key insights on our map. From a geographical perspective, there are affordable top-ranked programs in every region of the country. The West tends to have a higher number of inexpensive universities, like the University of New Mexico ($7,146) or Montana State University ($7,150), but similar price points can be found out East, too. Affordable education is available especially in places like Florida, West Virginia, and Maine. Even in New York, Binghamton University costs just under 10 grand.

What’s the main takeaway from our map? The least expensive top-ranked school is the University of Wyoming, where it only costs $5,218 each year in tuition and fees. Looking across the entire country, though, there are 28 states with schools under $11,000 and 46 under $16,000. All this goes to show that getting a degree is always a serious investment, but you don’t necessarily have to take on a mountain of debt to graduate.