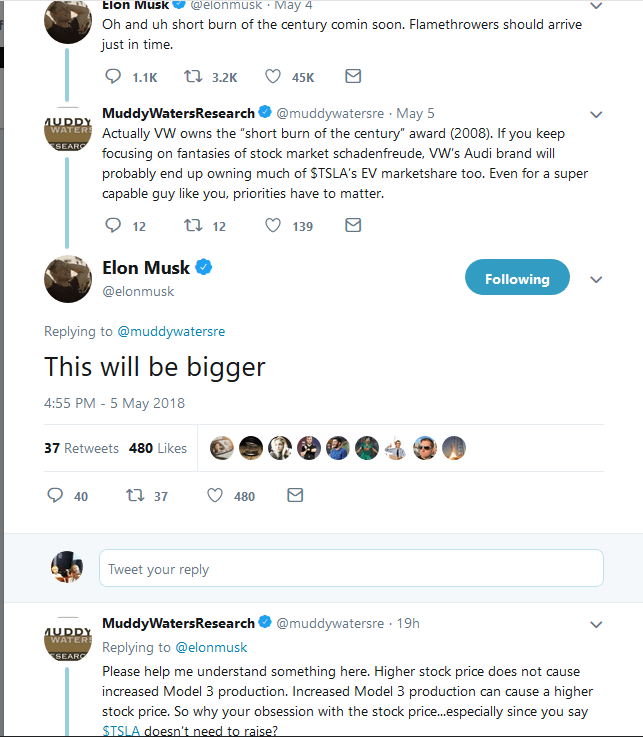 Mark Spiegel of Stanphyl Capital on why Tesla Inc. (NASDAQ:TSLA) is still a zero – a presentation from the recent short-seller conference hosted by Whitney Tilson last week. See the 156 page slide deck below.

Elon Musk’s bizzare tweets over the past few days is likely to help the share price, but the future is uncertain and the market is closed now, but check some of them out below and decide for yourself (note there are more which can be found on Musk’s twitter feed, below is just a few).

Reason RBC question about Model 3 demand is absurd is that Tesla has roughly half a million reservations, despite no advertising & no cars in showrooms. Even after reaching 5k/week production, it would take 2 years just to satisfy existing demand even if new sales dropped to 0.

The next Henry Ford or Donald Trump? We will let readers decide that one!

Now some excerpts from the PDF

This will be bigger

“TSLA does not need to ever raise another funding round” -Elon Musk, February 2012
Subsequent Equity & Unsecured Debt Financings:

Soon: Many more billions (if the SEC allows it and anyone gives it to them)

The Gigafactory and Panasonic partnership

But what about electric car batteries? TSLA’s a “battery company,” right? And what about the “Gigafactory”?
• Tesla’s battery cells are made by Panasonic

• TSLA uses a small cylindrical cell that- because it’s expensive to assemble into packs- has been obsoleted by new, larger format cells; no other major auto maker even wants to use them

•  Because of Tesla’s locked-in purchase commitments to Panasonic, it may now be paying significantly more for batteries than its competitors

• Bernstein estimates that <30% of current Tesla owners with Model 3 reservations completed their orders when invited to do so; forums indicate that the percentage among non-Tesla owners is much lower.

• Besides a massive number of Tesla forum posts indicating that the Model 3 is a lemon, its touchscreen-only interface means operating it is the dangerous equivalent of texting-while-driving

A massive number of long-range electric cars will soon be on the market, often at prices subsidized by profits from their makers’ conventional vehicles, an option Tesla doesn’t have. Additionally, here in the U.S. Tesla’s $7500 tax credits will expire in late 2018 while competitors will just be starting to use theirs, so pricing pressure on TSLA will be intense. Here’s the competition TSLA faces in electric cars…

More from the conference here