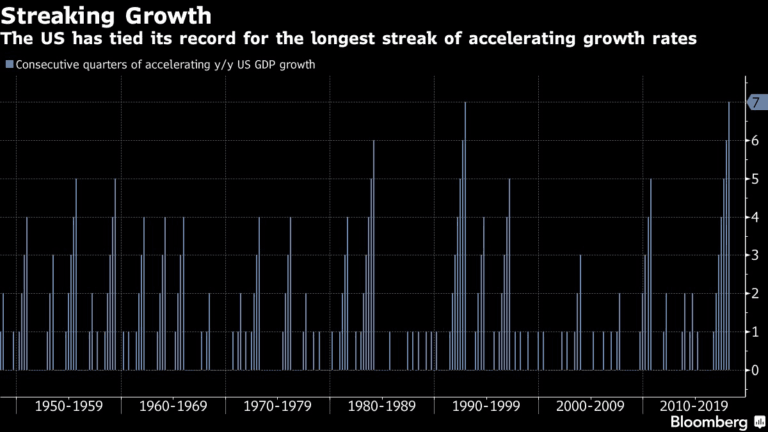 Elon Musk is possibly the most interesting man in the world, in our opinion. His nobility comes from his past as a founder of PayPal, but his popularity only grows in this era as he seeks to tackle big projects that include the car business, space, mass transit and other subjects. Rarely in an era does one person rise to this height of importance attributed to them by the society and time they live in. As an example, his cameo on the CBS show “The Big Bang Theory” crowned his popularity in 2015. What we’d like to do is look at the rhymes of history to ascertain where we are as the pendulum swings and if there are other symptoms today that are needed to guard our independent thinking as investors. Let’s look back in time at an analogous period of global history.

The Gilded Age of the 19th century produced a large creation of wealth as the United States of America continued to move deeper into its industrialized state. Families like the Rockefellers, the Carnegies, the Stanfords and the Crockers became names of note coming out of this era for the wealth accumulated during this period. The wealth of this period brought new tastes and interests. Mary Shelley’s Frankenstein and other popular novels romanticized the idea of going to the poles. The excitement of going to the ends of the earth captured the imagination. Beginning in the 1880’s, people began to explore the heights of Europe and America and dreamed of the North and South Poles. In Edward Larson’s To the Edges of the Earth, this story of global heights and reaches climaxed in the year 1909. On the subject of polar reach, Larson put it like this:

These fashions carried over into the early twentieth century. It was part of a cult of extreme adventure linked to the wealth and leisure flowing from industrialization; a Darwinian sense of struggle against nature; and eased access to once-remote locales due to imperial conquest, steamships, railroads, and telegraphs.

Royalty became involved as each country wanted to claim their stake in the global polar race. The Duke of Abruzzi, Prince Luigi Amedeo, was possibly the great coalescence of wealth, nobility, politics and aspiration for polar reach. The prince was born into the House of Savoy in Northern Italy, known for climbing as a family. He was the grandson of the King of Italy and the son of the King of Spain. He also flirted with the courtship and possible engagement of Katherine Elkins. Elkins was an heir to a Gilded Age family with a coal empire, whose father was the US Senator from West Virginia, Stephen Elkins. Prince Amedeo is reminiscent of Musk’s aura today. Larson wrote that “These were achievements of the age, and, while they set the duke apart from the average aristocrat in what he actually did, they were typical of what an increasing number of wealthy Europeans and Americans sought to do.”

The Duke was truly a marquee story in newspapers around the world for these reasons. In 1909, he sought to climb K2 in the Himalayas with a royal entourage in tow. The highest point on earth, then thought to be K2, was dubbed the third pole. After multiple attempts at the feat, they had no success. Instead they produced a myriad of topography and photography of this remote region of the world. If we fast forward in the Duke’s life, he died in Somaliland, current day Somalia, in a nanny state of affairs as a pawn for Mussolini.

The Duke’s parallels to Mr. Musk are rich examples of how time marks era with what can be termed “Big Man History.” There are a myriad of factors that go on in any period, but they are best explained through particular people and personalities. While there are large similarities among these two gentlemen, we’d like to look at an economic parallel. To the left is a chart looking at the 10-year Treasury Bond from 1790 to 2016.

The US Civil War ended in 1865. The Gilded Age ensued in the following years during the latter part of the 19th century. Rates fell through the end of the 19th century before rising to the height of World War I, something that no one thought possible in 1909 as the Duke of Abruzzi and the other explorers ran for the poles. It is no shock that as the interest rates dropped, the wealthy became wealthier and more powerful. The top 10% of wealth households in America owned 75% of the wealth. The bottom 40% had none of the wealth. To follow on Larson’s thought, “At the dawn of the twentieth century, after the rise of industrialized technologies that promised to make all results possible and before the Great War that made even the most self-sacrificing human struggle seem meaningless…” interest rates were low. Wealth and confidence, in comparison, were high.

This sounds oddly like today in the context of wealth inequality, declining interest rates for over 30 years, and reaching for polar heights in industries and space travel. What we want investors to understand is that these are all symptoms of the era we are in. We are explaining this to help crystalize in investors’ minds the market pressures and recency bias that is present in stock markets and investing today.

How do we as investors try to avert the polar reach of today?

To protect capital and grow our wealth, we must prepare for the cost of capital rising. This is the single most important factor for the next 10-year return of any asset in the world. When writing on speculative episodes, John Kenneth Galbraith wrote “Past experience, to the extent that it is part of memory at all, is dismissed as the primitive refuge of those who do not have the insight to appreciate the incredible wonders of the present”. The problem for us as investors is that everyone wants to know or justify what is going on now. We should be seeking to think of “the incredible wonders of the future.” A far better question for us is where interest rates will go in the future.

We can already see the effect of the rate rises in real terms for an asset like Treasuries. The chart below shows that Treasury bills haven’t made a real return higher than 2% since 2012. Currency-based investments like bonds will not provide the returns that investors have seen over the last 30 years and will hamper the typical 70-30 balanced portfolio, particularly for retirees. This could be a real problem for that group of investors. 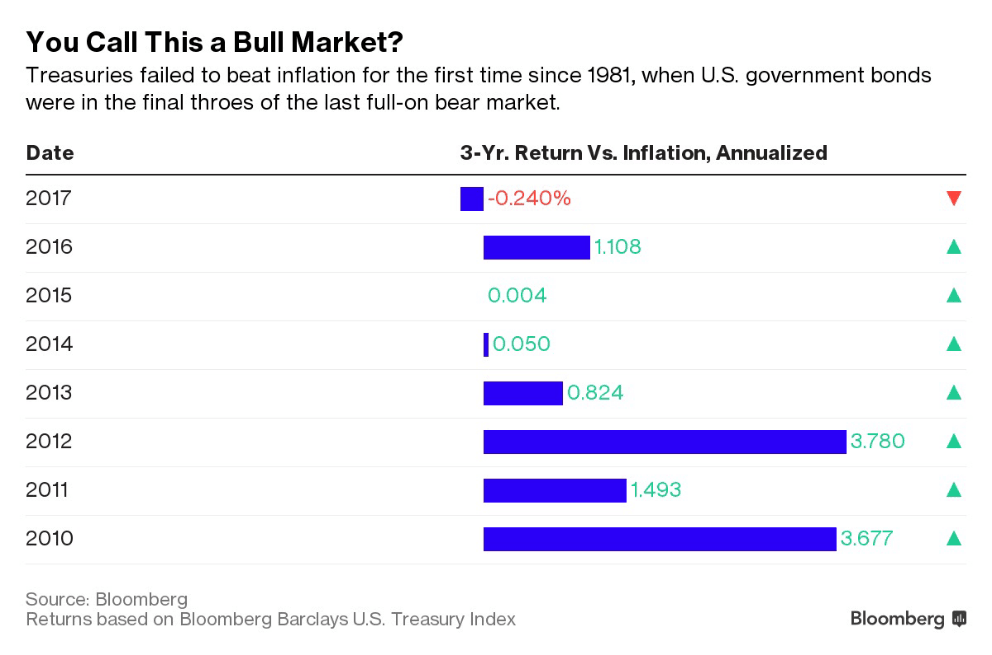 To illuminate why this may be a more important opportunity to ponder a brisk rise in rates, below is a chart showing the year-over-year GDP growth since they began recording the data in the late 1940’s. 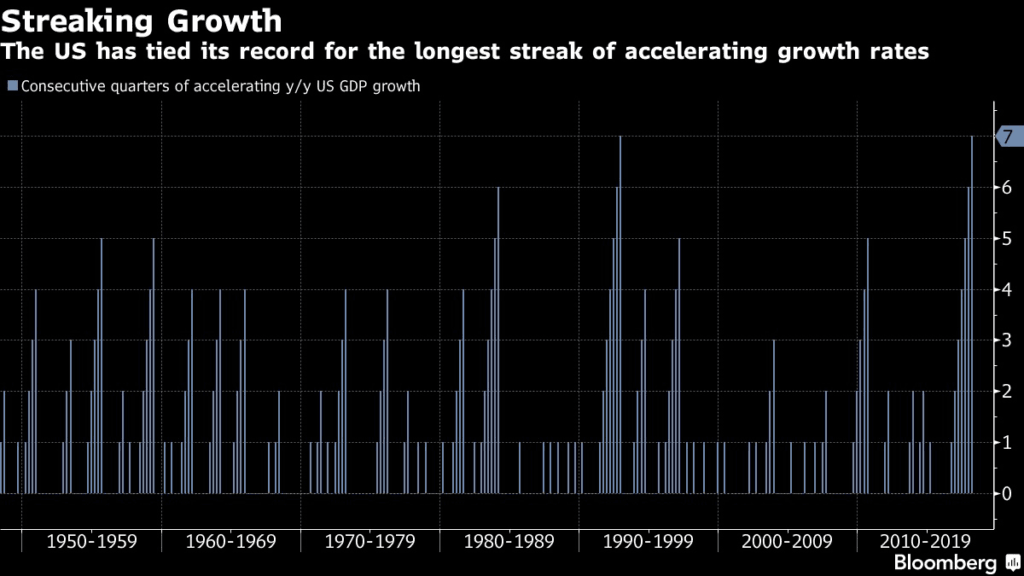 This chart shows us that the last seven quarters are the longest streak of quarterly year-over-year growth in the entire period, tying with the early 1990’s coming out of the Savings and Loan Crisis. This is all happening before the fiscal stimulus of the reduction in personal tax rates have flown throughout the economy. The chart shows the strength of the economy is firmer than most believe and may cause rates to rise faster than households expect, affecting stock multiples going forward.

As Jeff Gundlach said recently at the Sohn Conference, “Nothing new ever occurs in the business of speculating. What's happened in the past will happen again and again and again." The Gilded Age and today are strong evidence of what Gundlach is saying, or as King Solomon wrote that there is nothing new under the sun. The risk in the US isn’t low rates and weak economic growth. The risk is that things are better than investors expect and rates rise faster. The risk is that capital isn’t allocated as it should be for normal things to happen in households and businesses. The risk is that polar reach among investors in US tech stocks, futuristic dreaming and the stretch for the Gilded Poles aren’t going to end in anything other than disappointment as it did for Duke Abruzzi, ending his life in exile in Somalia.