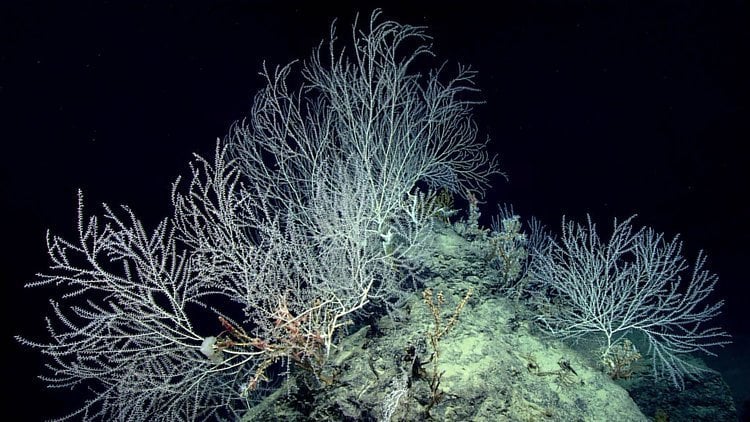 Scientists organized a 23 day long expedition in the Gulf of Mexico in April and May 2018. During their expedition, they came across something that was quite unusual, especially at the depth to which they reached. They were diving deep enough to discover a mysterious, secret coral garden that is believed to have been living there for centuries.

Scientists came across this discovery when they were conducting an expedition in uncharted waters. The secret coral garden is located at 7,500 feet beneath the Gulf of Mexico. What’s even more interesting about this discovery is that it was discovered for the first time ever.

“This is a truly magnificent garden of coral fans, I don’t think we’ve seen these densities yet in the Gulf of Mexico,” one of the scientists that was among the team that conducted the expedition reportedly said.

The NOAA team used the remote-operated submersible vehicle (ROV) to successfully conduct their expedition in the Gulf of Mexico. Also, they used a variety of instruments that allowed them to take photos of the secret coral garden. According to the scientists, the corals could be at least hundreds of years old.

The scientists couldn’t understand how the corals could live in such a dark and deep area for such a long time. However, the right geological conditions must be fulfilled before corals can survive. Additionally, the blocks that the corals attach to must provide stability for the corals to grow and survive.

It’s also important that the corals properly position themselves so that they can face the flowing underwater current in order to receive proper amounts of food to survive. Scientists analyzed the corals using videos and images they took and determined that all the corals were facing the current and also removing other organisms.

As per the South China Morning Post, the National Oceanic and Atmospheric Administration (NOAA) started exploration of the Gulf of Mexico at the end of last year. The aim of that mission was to uncover some deep parts of the ocean floor and make a precise map of the seafloor. However, a special 23-day mission was conducted in April and May 2018 that aimed to explore the habitats of the Gulf.

They managed to discover different habitats and acquired enough data about them by capturing videos of the underwater areas. One part of the expedition was also dedicated to looking at the deep coral communities, as well as bottom fish habitats, shipwrecks and other types of life that resides in the water. NOAA’s final expedition of the Gulf of Mexico in 2018 included uncovering the secret coral garden.

However, another uncommon thing they discovered was a waterfall under the sea, which is now listed as a brine pool. Moreover, they found a deep-sea squid in a defensive pose, mounds of mud volcanoes and debris from ships.