Calling it “a horrible one-sided deal that should have never, ever been made”, President Trump declared last Tuesday that the U.S. will pull out of the Iran nuclear deal made under the Obama administration. The United States is now preparing to reinstate all sanctions along with additional economic penalties on Iran.

French President Emmanuel Macron, German Chancellor Angela Merkel, and British Foreign Minister Boris Johnson all traveled to Washington in the past few weeks to lobby Trump to stay in the Iran deal. The withdrawal by the U.S. no doubt angers America’s European allies, plus Russia and China who all would like to see the deal go through.

Why the Iran Deal Is Important (to Everybody Else)

Why all the other countries care so much about the Iran deal? When in doubt, follow the money. The initial pact will impose strict limits on Iran’s nuclear program in exchange for lifting sanctions on the country. Once sanctions are lifted, many corporations in Europe, etc. seeking new growth and opportunities, are eager to do potentially lucrative business deals with oil-rich Tehran.

I am not going to do a full geopolitical analysis here regarding the potential impact of Trump’s “new” foreign policy on Transatlantic Trade and Investment Partnership (TTIP) and NATO, but will discuss some of my personal observations.

Oil and Gasoline Prices Get Squeezed

First of all, this announcement seems ill-timed coming out right before the official start of U.S. summer driving season with an immediate negative impact (for consumers) on oil and gasoline prices. 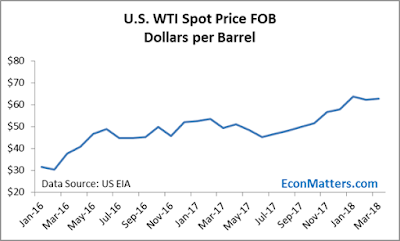 Iran is a member of OPEC and one of the top 5 oil producing countries in the world. U.S. benchmark WTI oil price hit above $70 for the first time since 2014, while Brent currently sits around $78. By reinstating and adding sanctions on Iran, the new pressure on geopolitics and supply will squeeze the oil and gasoline prices higher than they should have been. Not to mention this may upset the balance of the oil cartel production decision in the upcoming June meeting. 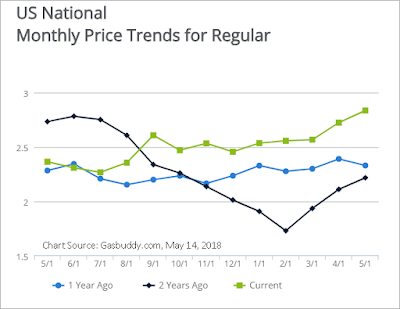 CNBC reported domestic gasoline prices are expected to spike to 4-year highs pushing the national average above $3.00 a gallon this summer. This is mostly due to higher oil prices from OPEC/Russia production cut and instability in Venezuela without even taking into account the additional premium resulted from Trump’s Iran deal decision.

Another observation is that as a nation, going back on a previous promise or commitment is just bad business no matter how you slice it. This is not the first time either. Trump also withdrew from the 2015 Paris Climate Agreement. While it is important to not back out of campaign promises, backing out of deals with every new president will leave friends and allies alike wondering if, with every new president there will be a new policy, causing instability to foreign relations and the economy.

Most likely, this is one of Trump’s tactics hoping to leverage a new and “better” deal, but in his simple math, he fails to take into account and quantify many moving and intangible pieces. When You Need a Friend

The irony is that Trump still reiterated the importance of allies’ “support” in solidifying the meeting and negotiation with North Korea. In his Iran deal announcement speech, Trump specifically mentioned help from China, along with South Korea and Japan.

Well, I’m not sure this is a reflection of low EQ or just plain bullheadedness. Besides the fact that backing out of the Iran deal has infuriated many allies, Trump also seems to have forgotten about a few rounds of the tariff tit for tad with China. China has a lot of deals on the line with Iran as well, and Trump just expects Xi Jinping to “return a courtesy” supporting Trump’s other initiatives?

Isolation Is Never a Good Thing

According to Reuters, so far China, France, Russia, Britain, Germany and Iran remain in the accord to place controls on Iran’s nuclear program and leading to a relaxation of economic sanctions against Iran and companies doing business there. Similarly, the Paris Climate Accord has 194 states and the European Union signed on as of April 2018.

It seems the rest of the world is moving on with or without the U.S. In the end, this type of lone-wolf move may seem boutique and “a breath of fresh air” to Trump’s supporters. However, no matter how justifiable in Trump’s or anybody’s mind, this will only isolate the United States, alienating allies and other friendly countries U.S. does business with.

Is It Really Such a Bad Deal?

I think the better question would be if these two deals were as bad as Trump indicated, then why are so many countries willing to go through with them?

There are many opinions regarding the pros and cons of these two deals Trump withdrew from. That means Trump will find support regardless which direction he moves. Fundamentally, I think Trump is treating foreign relation and policy like a commercial negotiation “making deals” as he used to do before taking office.

It is true combative Art of War could be applied in many situations; nevertheless, Washington has to come to terms with the reality that America is not the as big a “player” on the world stage with the greatest leverage any more. Playing hard ball is unlikely to get you anywhere.

Instead, think about BATNA, which is a famous term developed by negotiation researchers Roger Fisher and William Ury of the Harvard Program on Negotiation in their 1981 bestseller, Getting to Yes: Negotiating without Giving In. BATNA stands for “Best Alternative to a Negotiated Agreement.

In BATNA theory, the common pitfall is that most people involved in a negotiation overestimate their BATNA while investing too little time into researching their real options. This usually results in poor or faulty decision making and negotiating result. Does that sound familiar and adequately describe Trump’s “deal making” so far?