With mobility and unemployment rates at a historic low, a new study by Apartment List explores the reasons why people move in this economy.

It seems logic would suggest one would be motivated to make a big move to a new metro area for a job opportunity, but our recent report shows that it’s not that simple. Some renters search for jobs in multiple metros, moving for a specific job opportunities, while others select a location before looking for jobs.

Since renters are traditionally more likely to make a long-distance move than homeowners, Apartment List, a rental search service, asked over 20,000 of its users about the reasoning behind their decision to select one metro over another. The sample was limited to non-college students who are currently living in the area outside of where they grew up.

The responders were divided into two groups based on their decision-making process:

According to the report, location-first movers make up 53.5 percent of all renters, whereas 46.5 percent of renters move for the job. So, what do they look like in more detail?

Deeper analysis revealed that job-first renters tend to have a college degree and move to metros with higher housing costs. 57.2 percent of renters with a bachelor’s degree are job-first movers. College educated people are twice as likely to make a big move than their counterparts that only have a high-school degree. They apply for jobs and multiple cities and then pick one based on offers they receive. Furthermore, renters with Science, Technology, Engineering and Mathematics (STEM) degrees are even more likely to move and gravitate towards tech hubs. 62.4 percent of those with a STEM degree are job-first movers. But moving doesn’t necessarily equate to staying. Apart from figuring out the factors that motivate renters move to new cities, the study also sets a goal to identify where renters end up settling.

The main destinations for job-first movers are tech and business hubs, such as Silicon Valley, Boston, Houston, Seattle and Denver – with the highest share in San Jose (75 percent) and the Research Triangle in North Carolina (59.4 percent). Because college educated renters tend to move to highly desirable areas with better economic opportunities and subsequently higher cost of living, they also don’t usually settle down in those metros. Only 27.3 percent of job-first movers are planning to stay in their current metro. Unsurprisingly, renters in expensive coastal metros that are the main destination for job-first movers cite affordability as the main reason they plan to leave the area, which is not surprising at all. According to the Apartment List’s latest renter confidence survey, San Francisco and Seattle renters gave their respective cities an F for affordability, whereas Boston got a D. It’s interesting to note that the newer tech hubs, such as Austin and Denver seem to become increasingly more appealing to tech workers, since they have a higher share of renters planning to settle down. 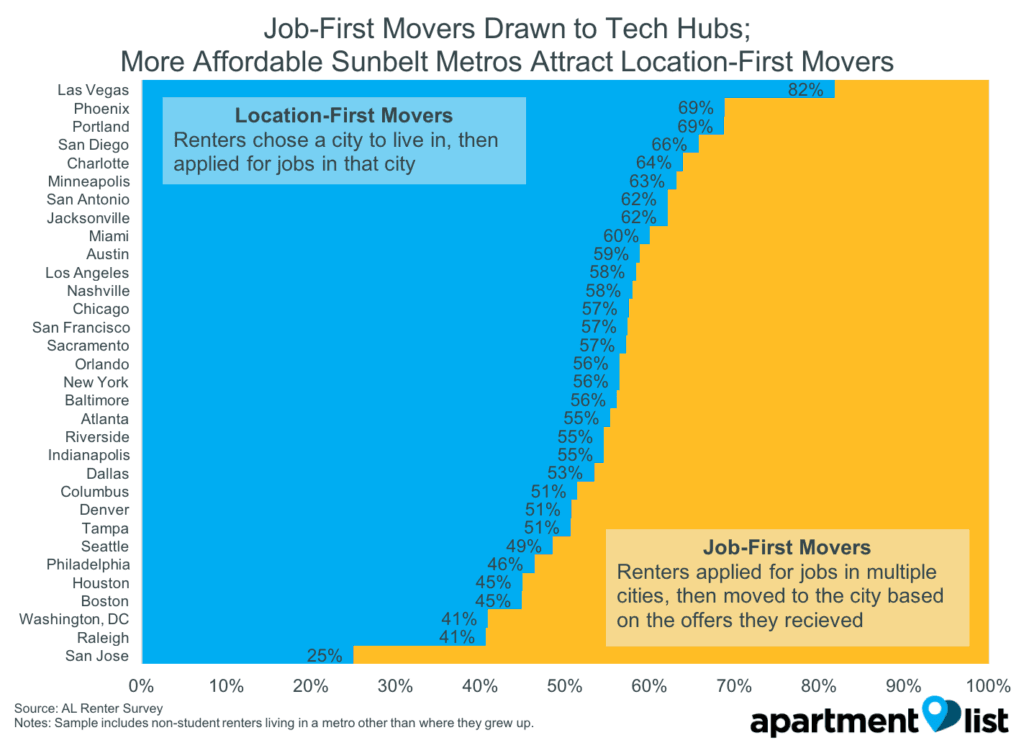 People that pick a city before securing a job tend to not have a college degree. 64.5 percent of those without a bachelor’s degree are location-first movers. They select a new place to live based on housing affordability and lifestyle. To better understand reasons behind long-term moves, Apartment List chose to use a hospitality worker without a bachelor’s degree as an example as a location-first mover. While a college educated tech employee is more likely to choose a city based on job opportunities, gravitating towards business and tech hubs, a hospitality employee can find relatively similar jobs in many cities around the nation. Moreover, it’s much harder for the hospitality worker to secure a job before moving, since they will likely need to be in the area and ready to start work within a short time, leaving little time to make the move after getting the offer. In this case affordability might be a major factor in selecting the destination.

Location-first movers tend to gravitate towards fast-growing Sunbelt metros such as San Antonio, Las Vegas and Charlotte. In the last renter confidence survey, renters gave them A+, A and B for affordability respectively. Apart from affordability, the above-mentioned metros also offer job opportunities. With its abundant supply of hospitality jobs and low rent, Las Vegas is the #1 metro in the nation for location-first movers. Location motivated renters comprise 82 percent of all movers to the area.

Unlike job-first movers who don’t plan to settle down in the areas they relocate to, location-first movers are more likely to stay in the cities of their choice – housing affordability and cost-of-living being major factors for selecting the place to settle down. 42.8 percent plan on settling down in their current metro. The most desirable metros for settling down are Las Vegas, San Antonio and Charlotte with 63 percent, 61.1 and 57.6 percent of current renters planning on putting down roots, respectively. 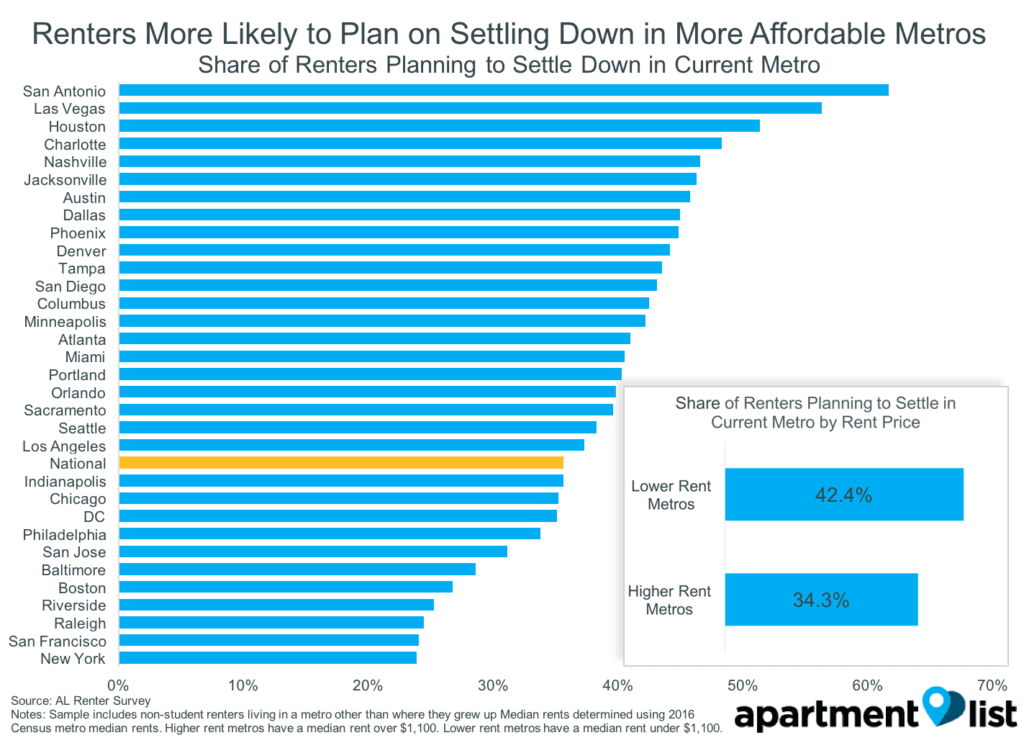 Although job opportunities are a main driver of moves for all renters, the decision-making process behind selection of a place to live has evolved and varies across demographic groups. Higher paid college educated renters are more likely to move for a specific job and less likely to settle down due to the skyrocketing housing cost in the most desirable business and tech hubs. Less-educated lower wage workers tend to move to more affordable metros with strong job markets where they plan on settling down.