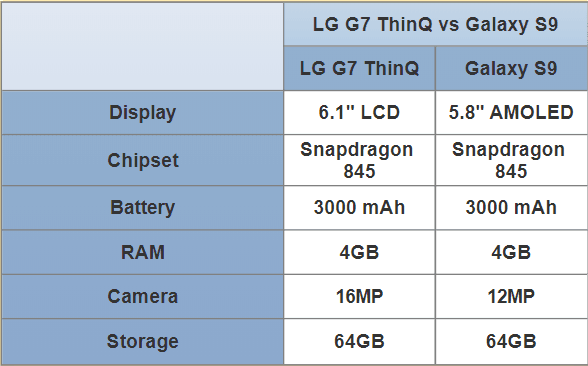 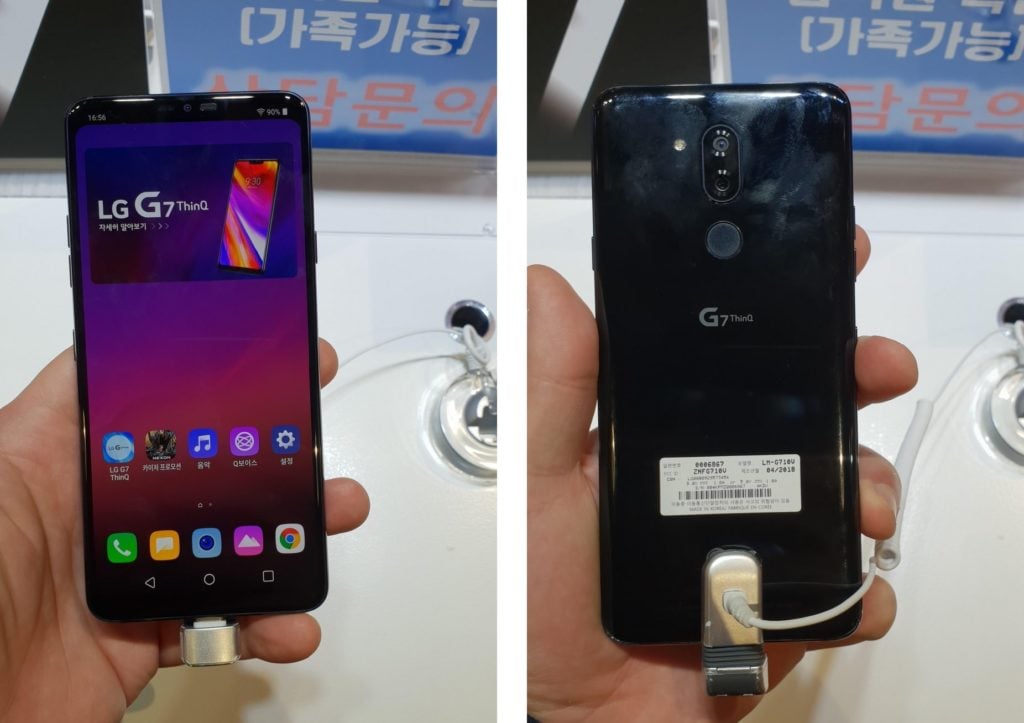 LG’s latest phone is about to hit the market, but how does it compare to the latest and greatest from Samsung? We take a look at the LG G7 ThinQ vs Galaxy S9 to help you get a sense of which phone might be right for you.

When comparing the LG G7 ThinQ vs Galaxy S9 in terms of design, it’s easy to see there are some pretty stark differences – namely the decision to include the Notch on the ThinQ just as we saw with the iPhone X. Apple has managed to spawn a series of imitators from various Android manufacturers and not many do it quite as well as they did, and unfortunately it’s looking as if the LG G7 ThinQ is no exception on that front.

While the LG G7 ThinQ notch looks similar to the iPhone X’s at first glance, you’ll quickly notice a rather large bezel where there shouldn’t be one – and avoiding that was the entire point of including the Notch on the iPhone X in the first place. Outside of the slight misstep with the Notch, the LG G7 ThinQ has a pretty premium design with IP68 certified dust and water resistance.

The Samsung Galaxy S9 has a similar setup to what we saw with the S8 which is a good thing in terms of design. With a simple and premium design with minimal bezels, it truly feels like a premium device without trying to imitate competitors.

If color isn’t a major concern, we feel that Samsung is the winner in this LG G7 ThinQ vs Galaxy S9 comparison.

The LG G7 ThinQ features a 6.1-inch LCD screen with a 19.5:9 aspect ratio – making it taller than the average phone of its size.

The Samsung Galaxy S9 has a slightly smaller 5.8-inch display with an aspect ratio of 18.5:9 which is relatively similar to that of the G7 ThinQ.

While these phones may seem similar in terms of display at first glance, the Galaxy S9 sets itself apart with a Super AMOLED display rather than the LCD we saw with the ThinQ, making this LG G7 ThinQ vs Galaxy S9 battle a clear win for Samsung once again.

While the LG G7 ThinQ has generally received good reviews for its screen, it really can’t compete with Samsung’s latest phone – a device which is widely considered to have one of the best screens in smartphone history.

Overall, when comparing LG G7 ThinQ vs Galaxy S9 in terms of power, it’s currently a tossup. There’s no real determining factor that allows us to decide one way or another as to which phone is the top buy.

With that said, software efficiency could certainly play a part and we’re not sure how the software will perform on the LG G7 ThinQ until we get our hands on the device.

Samsung has made a big deal out of their Galaxy S9 cameras – even going so far as to focus all the marketing around the feature. While the Galaxy S9 Plus features a dual lens, the base Galaxy S9 only has a single camera which makes comparing the LG G7 ThinQ vs Galaxy S9 a swing in LG’s favor.

The LG G7 ThinQ features a 16MP f/1.6 primary lens and a 16MP /1.9 wide-angle one. The Galaxy S9, on the other hand, only has a single 12MP lens. With that said, it does have a variable aperture that allows it to switch between f/1.5 and f/2.4 as needed – giving it great low light performance.

Until we have a chance to test the LG G7 ThinQ after the release, it’s difficult to say which phone will be the winner, but at this point, it seems as if the LG G7 ThinQ has an edge up.

Both phones feature a 3000 mAh battery, so it’s difficult to do an LG G7 ThinQ vs Galaxy S9 comparison on that front.

While the LG G7 ThinQ has impressive specifications and has arguably better camera specifications than the Galaxy S9, we feel that Samsung’s phone comes out on top with superior design, display, and comparable power. With that said, the LG G7 ThinQ is not yet released so there’s certainly a possibility it can provide comparable performance and features once it hits the market.