ValueWalk
Home Technology Are Feature Phones Making A Comeback? Find Out In This New Report 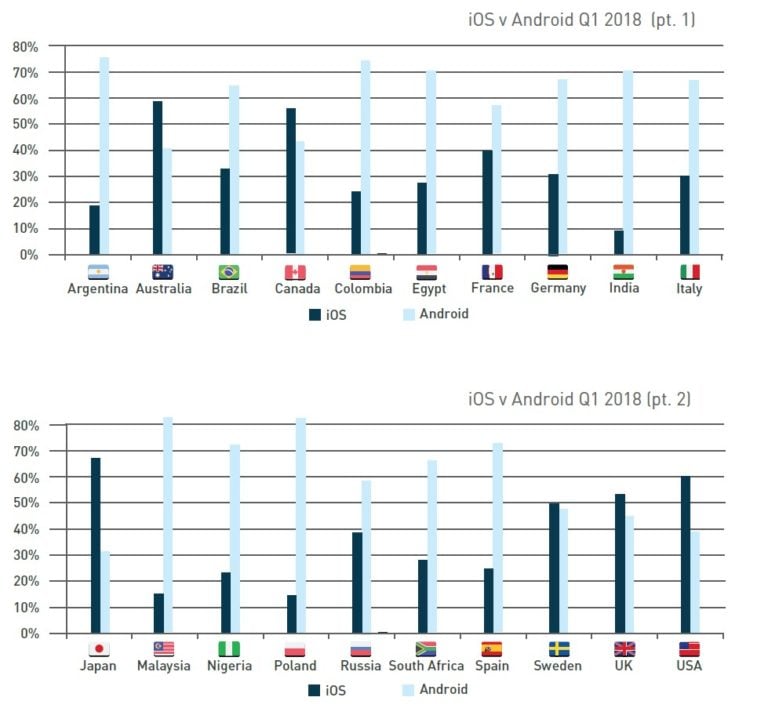 The latest Mobile Web Report from DeviceAtlas explores the latest statistics for smartphone usage around the globe. The key highlights include:

DeviceAtlas tracks web traffic from hundreds of thousands of partner websites using our device detection platform for web optimization, segmentation, and analytics. This allows us to analyze the current state of the mobile web by sharing some exciting statistics about the most popular smartphones used today. In the Q1 2018 edition of the Mobile Web Intelligence Report we focused on:

All statistics in this report are based on device usage data pulled from DeviceAtlas, a device detection solution. DeviceAtlas works by parsing User-Agent strings which are looked up in the device description repository that includes over 49,700 unique entries. The report offers just a glimpse into what’s possible with DeviceAtlas. See the mobile analytics demo to get a better idea.

Having recently examined the perennial iOS v Android battle for market share in 2017, our data from Q1 2018 tells a similar tale.

iOS dominates in predominantly English-speaking countries, as well as Japan. In Sweden, it has a slender 2% lead over its Android equivalent. Android enjoys a clear gap in the majority of other countries in our data, caused in part by the abundance and diversity of reasonably priced Android powered devices.

Our look into 2017 v 2016 OS data gave us some insight into the shifting marketplace, and how Android/iOS devices were increasing in popularity in some countries, but declining elsewhere.

Comparing that data to Q1 2018 also provides some interesting insights: 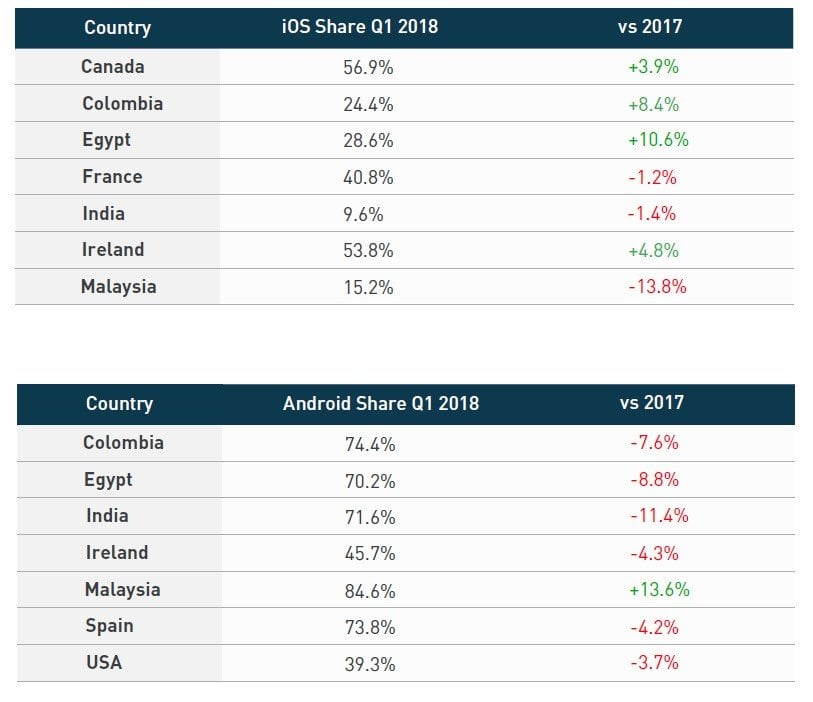 As we see in the above charts, both iOS and Android lost market share in India. In a country of over 1.3 billion people, a few percentage points can make a huge difference to a manufacturers bottom line.The natural conclusion is another OS eating into  their market dominance, and our data reflects this. The new entrant – KaiOS – has already overtaken iOS as the second most used OS in India. With 15% of total traffic, it beats Apple devices into third (with 9.6%).

Elsewhere, feature phones are still an active part of most countries mobile ecosystem, but have yet to make as impressive an impact as in India.

When we dug into the Q1 numbers, we paid particular attention to “Year of Release”, one of 168 properties available through DeviceAtlas.

Feature phones released in 2011 accounted for 13% of all such devices registered in our data. As the chart below shows, there is a sweet spot from 2008-2012 – could this period have been the zenith of the feature phone? 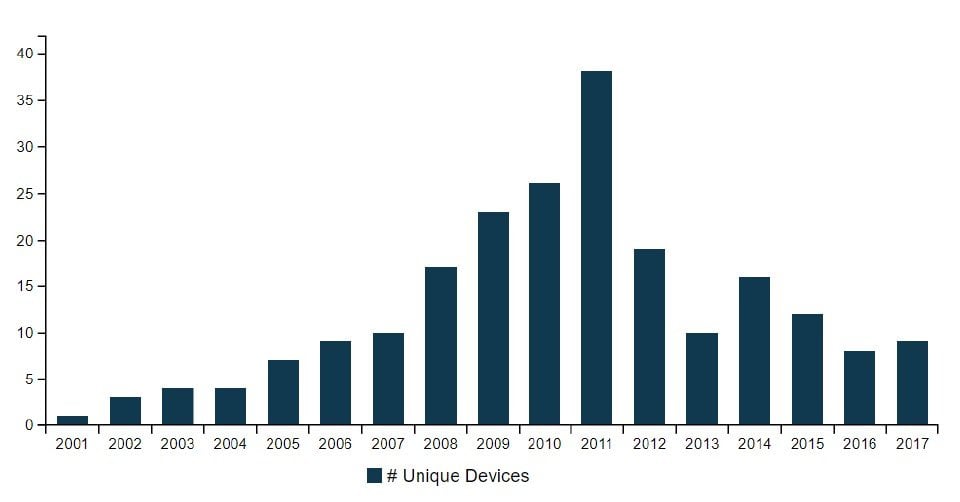 When we look at raw visits from feature phones based on year of release, we see a slightly different scene – phones released in 2005 (including the Nokia 6230i and N70) drove 6.6% of total traffic. Phones released in 2017 accounted for almost 90% of our data, so the performance of their 2005 counterparts is more impressive than the percentage alone implies.

The volume of traffic for 2017 can be attributed to India, and the success of recent feature phone launches. Top in our list was the Lyf/Jio range of KaiOS-powered handsets. Reliance Jio, India’s third largest operator with over 160 million subscribers, have in recent months taken the tariff war to the next level, and as a result their branded devices dominate the feature phone landscape. They account for over 88% of this data set.

Given a feature phone’s hardware restrictions, it’s no surprise to see them running different operating systems. A modern version of iOS of Android require functionality and power beyond the reach of feature phones as we know them. Finding a balance, and offering as much as is reasonably possible, is key.

We looked at some of the more common feature phone OS’s in use today.

KaiOS is a Linux based OS that seeks to bring “smartphone-like functionalities to affordable phones”. Offering a range of apps through the KaiStore, the most notable devices to run Kai are the revamped Nokia banana phone (8110) and the range of Jio/Lyf handsets mentioned above. Recently announced partnerships with the likes of Facebook, Twitter, Google, AT&T and T-Mobile ensure a healthy future for the FirefoxOS fork.

Nokia are synonymous with feature phones. They’re responsible for the first camera phone sold in the US, and also made headway in the areas of mobile TV and gaming. Their latest OS version, dubbed Asha, is one of many variations they’ve used over the last two decades. “Nokia OS” can be considered an unbrella term for many variations, encompassing the entire family of Nokia mobile
operating systems. Their more recent releases (they’re now owned by Microsoft) have featured Windows or Android software.

Originally conceived as an OS for the PDA variety of devices in the late 90’s, Symbian accounted for 37.6% of all smart mobile devices sold in 2010. Apple were at a mere 15.7% that year. However, the Android/iOS explosion hit the OS hard. As a result, Nokia, who were its primary supporters, stopped supporting Symbian development in 2014.

Brew is an ancronym for Binary Runtime Environment for Wireless – an application dev platform, created by Qualcomm. It’s still used in some form by manufacturers such as Huawei, LG, Samsung and HTC.

Another acronym, REX is a Real-Time Executive Operating System.

While the majority of our data shows the Jio/Lyf phones, with a screen size of 2.4 inches, the average is slightly below that at 2.35 inches.

Compared to smartphones, the difference is stark – 12.5% of all devices in our database feature a 5 inch screen, with 6% sporting a relatively-massive 7 inches.

The below chart shows the top 20 feature phones as seen in our data, along with their Year of Release, Diagonal Screen Size (inches) and Operating System. 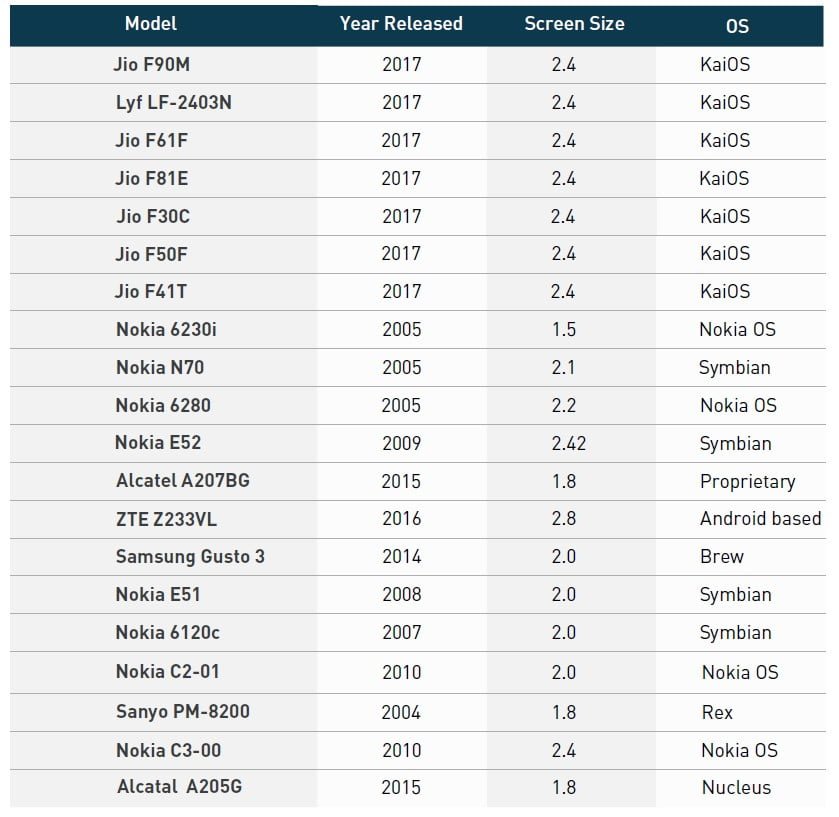