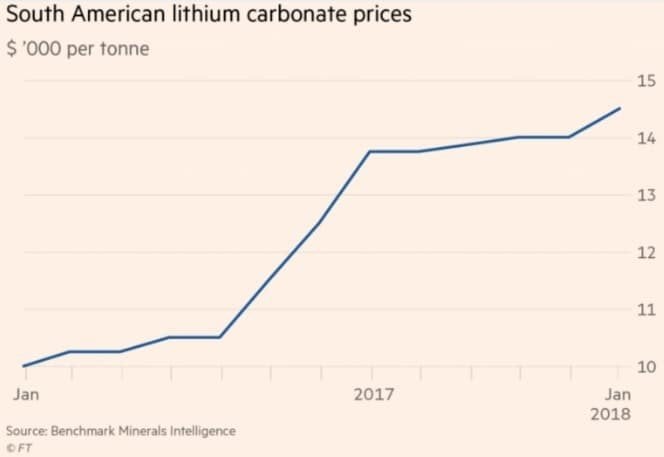 The age of the electric vehicle (EV) will be here sooner than you think.

Out of 1 billion cars in the world, only 2 million are electric. But that will soon change, as costs diminish, and more governments encourage the adoption of EVs to cut carbon emissions and fight urban pollution.

According to Bloomberg, by 2040, 54 percent of all new car sales will be for EVs. Millions of new EVs will take a big bite out of oil demand and displace 8 million barrels of transport fuel (gasoline and diesel) every day.

But the biggest factor in the EV surge is what’s under the hood…lithium ion batteries.

Bloomberg estimates that in the late 2020s, cheap battery technology will allow EV production to skyrocket.

The key is lithium, “white petroleum,” which is quickly becoming the world’s most sought-after mineral.

Jonathan More of lithium miner Power Metals Corp. calls it the largest commodity boom “in a generation.” The world is going to need “mountains of lithium, from all over the world, to satisfy the global hunger for batteries.”

A lot of those lithium batteries will be needed for EVs: in fact, major oil companies like Total SA have estimated that 20 million EVs will be on the road by 2030, and they’ll need enough batteries to power 200 million cell phones. That’s 1.2 million tons, six times current production levels.

With future demand like that, it’s no wonder that miners like Power Metals are so bullish. With a 15,000m drilling program about to get underway on 3000 hectares, Power Metals is at the center of the Canadian lithium belt that could contain as much as 7.5 million tons of lithium.

Forget oil and gas; the future of energy belongs to lithium.

When EVs first started to roll off assembly lines, plenty of skeptics scoffed. EV sales were tiny and concentrated on the luxury car market.

But now that’s all changing.

In March 2018, more than 40,000 EVs were sold in Europe, a 41 percent increase from last year. Total sales for the year were up 37 percent from 2017. European auto-makers like Volvo want to concentrate on EVs, and plan on electric cars and trucks covering 50 percent of all sales by 2025.

The real juggernaut in the global EV market is China, where half of all EVs are currently in use. China will remain the chief EV market for the next 5-7 years, and demand is growing more quickly than expected.

The Boston Consulting Group released a report estimating that hybrids and EVS would cut the market share of internal combustion cars by 50 percent by 2030.

Whether you’re an EV skeptic or a Tesla super-fan, it’s impossible to deny that EVs are going to transform the international auto market…and trigger a massive increase in demand for lithium, the key ingredient in all EV batteries.

You can’t have EVs without lithium ion batteries. That’s why Tesla CEO Elon Musk built a “gigafactory” in the Nevada desert, where thousands of batteries are churned out every year.

Batteries have gotten a lot cheaper to make, but it all hinges on securing an adequate supply of lithium.

New lithium deposits are being uncovered all the time. One asset, Paterson Lake in Ontario, contains thousands of tons of lithium spodumene locked away in “pegmatite,” hard-rock formations that are entirely different from the salt-brine lithium found in South America.

Together with new production in South America, Australia and Europe, Canada will help feed the world’s lithium demand and facilitate the surge in EVs by the 2020s.

When EV demand began picking up in 2015, it triggered a bull market for lithium. Prices shot up as battery manufacturers started buying up all the lithium they could find.

Lithium prices remained strong in early 2018, and capital is flooding into lithium projects all over the world.

A lot of the money is coming from China, the world’s leading battery manufacturer. Capital is seeking out lithium properties in South America, as Chinese companies hope to secure lithium supplies to feed EV battery growth.

Chile and Argentina are the world’s no. 2 and no. 3 lithium producers, and production in Argentina is expected to triple by 2019 to more than 15,000 metric tons per year.

So aggressive has the Chinese push into South American lithium been, the Chileans have started to push back, warning one Chinese firm away from attempting to buy one major lithium producer, worth $5 billion.

According to one August 2017 analysis, the global lithium ion battery market could reach $93 billion by 2025, growing at a rate of 17 percent each year.

To feed that colossal demand, the world is going to need lithium. A lot of it.

Miners in Canada and South America will bear the burden. Power Metals could potentially turn Canada into a major lithium producer, and it’s not alone: other companies like Nemaska Lithium have also made big discoveries, riding them to billion-dollar valuations.

Battery manufacturers feeding the EV market will rely upon new sources of lithium production. The surge of investment into lithium mining could turn into a flood.

A strong push towards nuclear power from China, India and the Middle East could create further upside for this promising miner.

NOT AN INVESTMENT ADVISOR. Oilprice.com is not registered or licensed by any governing body in any jurisdiction to give investing advice or provide investment recommendation. ALWAYS DO YOUR OWN RESEARCH and consult with a licensed investment professional before making an investment. This communication should not be used as a basis for making any investment.

RISK OF INVESTING. Investing is inherently risky. While a potential for rewards exists, by investing, you are putting yourself at risk. You must be aware of the risks and be willing to accept them in order to invest in any type of security. Don’t trade with money you can’t afford to lose. This is neither a solicitation nor an offer to Buy/Sell securities.

RISK OF BIAS. We often own shares in the companies we feature. For those reasons, please be aware that we are extremely bias in regards to the companies we write about and feature in our newsletter and on our website.