Music fans and execs take note: Stock charts may hold the key to understanding the pop charts. If that sounds counterintuitive, consider this: Researcher Hisam Sabouni of Claremont Graduate University posted a paper in March that used computational tools from Spotify to show that the sentiment of popular music has tracked the ups and downs in the Dow Jones industrial average and other major U.S. stock market indexes.

Matt Lampert, director of research at the Socionomics Institute (www.socionomics.net), points out that these findings are consistent with his colleague Robert Prechter’s research from 1985. Prechter surveyed more than 60 years of American popular music and found the music had “been virtually in lock-step with the Dow Jones Industrial Average.” 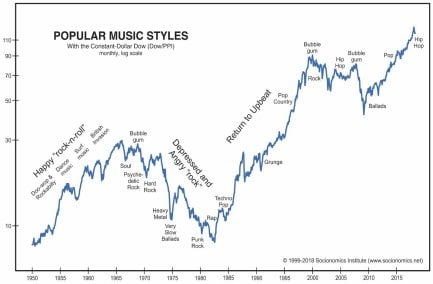 It’s not just an American phenomenon. Sabouni found evidence that markets and music have trended together in the UK. And Lampert and collaborator Mikko Ketovuori from the University of Turku found a similar tendency in a recently published study of Finland.

Why the connection? Prechter proposed that both popular entertainment and the stock market reflect underlying social mood trends. And if that sounds like economists should consider the songs on the pop charts as a public sentiment indicator, then the Bank of England’s chief economist Andrew Haldane just might agree. He noted in a speech in April that Sabouni’s music sentiment index “does at least as well in tracking consumer spending as the Michigan survey of consumer confidence,” adding, “And why stop at music? People’s tastes in books, TV and radio may also offer a window on their soul. So too might their taste in games.”

Indeed, the Socionomics Institute’s 2017 book Socionomic Studies of Society and Culture documented correspondences between financial markets and the public’s preferences in entertainment, architecture, baby names and beyond.

So, with that in mind, what should we look for in the “songs of the summer” this year?

Childish Gambino’s “This Is America” is a prime example, with Pitchfork describing it as a song “built on the sharp contrast between jolly, syncretic melodies and menacing trap cadences.” Drake’s knack for almost-monotone vocals, danceable beats and optimistic lyrics are also scoring. Post Malone, Camila Cabello and Kendrick Lamar are other contenders.  “As a dark horse,” Lampert says, “check out the artists playing around with ‘80s throwback sounds with occasional doses of musical and lyrical quirk, sparseness and dissonance.”

If the stock market makes up its mind and either blasts off or falls hard, look for the sentiment in hit music to match the sentiment behind the move in the market.

Matt Lampert is the director of research at the Socionomics Institute (www.socionomics.net), a think tank dedicated to using data on social mood to understand and anticipate social trends.