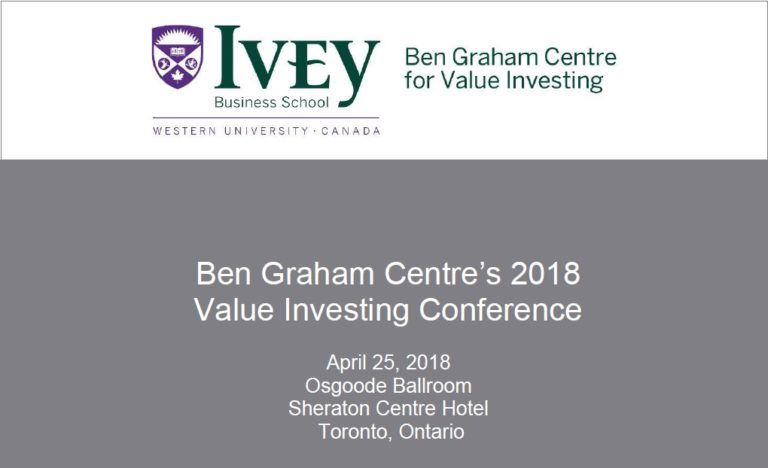 And with that I’d like to ask  David Sokol to give us his insights into the global container shipping industry (inaudible).

You may be wondering how container shipping fits into this value investing conference conference. It fits perfectly for (inaudible).

What I’d like to do is spend a bit of time (inaudible).

I got involved with this company because of another company I’m involved with that’s a major shareholder, that’s the Washington Group. As you can probably (inaudible) the fact

The container shipping industry is rapidly evolving to something quite similar to FedEx and UPS. Historically, goods were moved around the world, often Greek ship owners, (inaudible) would have enough of a requirement to move a good or a commodity from one place to another. And someone would bid for the opportunity to move that good on a ship and to arrange for delivery wherever.

This has evolved very rapidly over the last 30 years. To the point where the major liner companies – MERSK, COSCO, Hanjin and others, CMA – are very much charging a lot like FedEx and UPS. So as containers grew, if you wanted to move a box from Shanghai to Toronto, historically you would have to find somebody to (inaudible) your box. Get it to your warehouse, you load it, you’ve got to get it to a port, work out with some shipping company to move it from one port, probably to several others, and then ultimately get to your destination.

Today, the major liners are actually starting to take orders over the internet, and delivery times have been shortened very dramatically. So containers are starting to move, not with the efficiency obviously of the envelopes and the boxes that FedEx and UPS move, but they’re starting to look an awful lot like it.

Where does (inaudible) fit into this sort of growing industry, in light of the (inaudible). What did we do? And I’ll go into this in a little bit more detail later, but we own ships and we charter them to the major liners. We operate them for them. We’re just a piece in the… we’re just… well we’re a trucking company on the water. So we own the ships, we operate them for MERSK or COSCO or someone who charters on a long term basis with us. And we handle that piece going from port to port. And I’ll talk in a moment about what risks we take and what risks we don’t take in the process.

So part of the value chain here that is interesting is, as I mentioned before, the products, and they can be home goods of someone moving from one country to another or they can be tennis shoes, or they can be shipments of lead. And as the industry is consolidated, from the standpoint of the MERSKs and (inaudible) from your warehouse to where you want to deliver it, they have a really good look at the cap (inaudible). So today, about half of the major container ships are owned by people like us. And operate (inaudible) themselves.

So in terms of, just quickly, as you see here… liners, that’s our customer. That’s CMA, and MAERSK and Hanjin and those types of players. Some of the words in this industry are useful because it has certainly been a learning experience for me. Feeder ships. Those are ships that range in size from about 2500-2700 boxes per ship. They work in the smaller markets, they feed the larger markets, (inaudible) and loaded on the larger ships.

The three in the middle – Panamax – that used to be the largest ship that could fit through the old locks in the Panama Canal. Typically you’d think of them as 4250 TEU container ships. A TEU being actually a 20-foot container. That’s where that name comes from. Actually most of the containers you see on a ship today, or you see on a truck or a rail car, are 40-foot. Two times TEUs. So the old Panamax used to handle… they were huge. About 4250 of those containers.

Post-Panamax ships are the ones that now can go through the larger locks in the canal. Up to 14,000. And there are enormous ships. I’m sorry that’s the new Panamax. Most Panamax are the 4200 up into the 8500. And now you can actually take through some larger ships of up to 14,000 units per ship through the Panama Canal.

That’s significant because you probably heard in the press recently that some folks are actually buying ships that are over 20,000 TEUs and they cannot go through the Panama Canal. So they have a different set of economics and a different set of utilizations.