ValueWalk
Home Business Crescat Capital Q1: Why China And The Yuan Are Going To Burst... 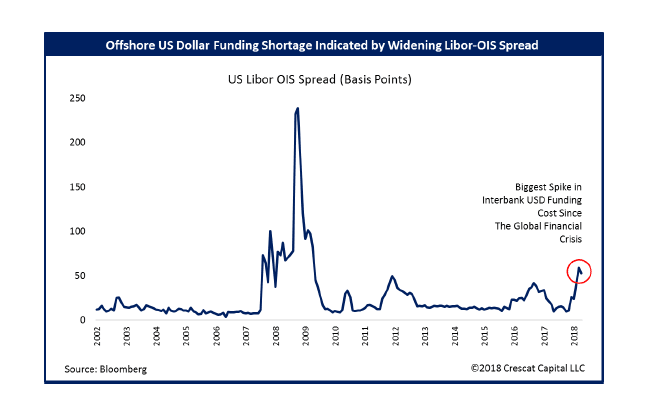 Crescat Capital Q1 letter to investors below on China

With the Fed locked into a rate hike and quantitative tightening plan in the face of rising inflationary pressures in the US, the next several months and quarters should prove an excellent time for hedge fund short-selling strategies. Several asset bubbles already began to burst in February this year. Crescat’s hedge funds had strong absolute and relative performance that month. While many global equity markets have bounced off their February and March lows, we strongly believe it’s a bull trap. For the reasons we discuss below, we think February was only the beginning of a bear market that has much more to play out in our favor on the short side.

The almost-certain biggest asset bubble in the world today, the rhino in the room, is the Chinese credit market, and the yuan by extension. The US stock market is also in an historic valuation bubble. We have thoroughly documented the extent of these bubbles in our past several quarterly letters.

Fed tightening has been a reliable catalyst for the bursting of asset bubbles globally as the chart below illustrates. This time will almost certainly be no different. Thus, we remain net short global equities in our hedge funds:

The Chinese currency and credit bubble began to burst in 2015 but was forestalled by a perversely strong yuan and weak dollar in 2016 and 2017. We show five unsustainable imbalances below that are setting the yuan up now for a substantial devaluation.

1. In late 2014, the People’s Bank of China switched to net quantitative easing versus the Federal Reserve when it began aggressively selling foreign reserves and buying domestic assets. We show the two central banks’ cumulative balance sheet changes in the chart below. In 2015 and early 2016, USDCNY reacted as it should have to these fundamentals with the yuan declining. A currency pair’s value normally tracks the relative monetary policies of its central banks. Note the natural relationship in the chart since 2002. Now notice how the yuan has been doing a head fake for more than a year now relative to these macro fundamentals, forming what we at Crescat call an alligator mouth. Note how the snout is poised to snap shut. In 2017, the Chinese central bank purchased close to $700 billion of domestic assets. China is engaged in aggressive QE at the same time as the Fed is now in quantitative tightening mode portending a substantial devaluation of the yuan versus the dollar. 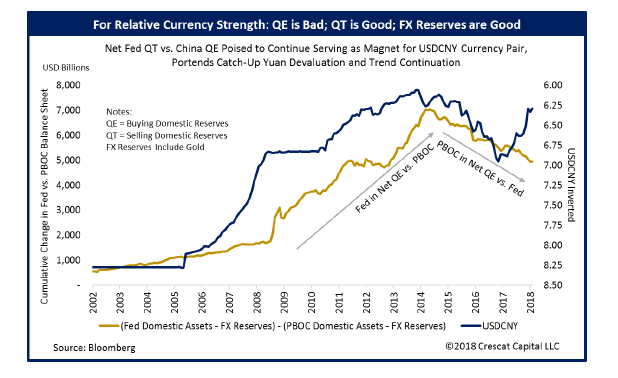 2. The yield spread on 10-year Chinese government bonds compared to 10-year US Treasuries has narrowed further illustrating China’s relative QE compared to the US forming another alligator mouth that should snap shut again with the yuan declining. 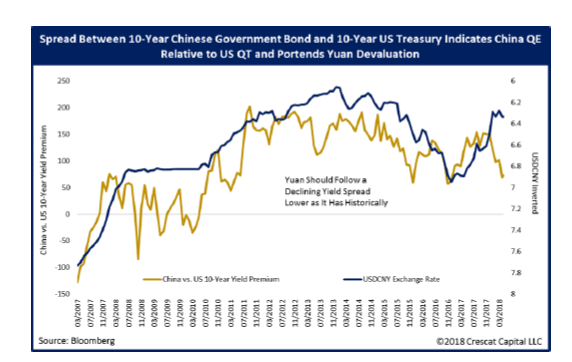 3. Versus the dollar, other emerging market currencies as measured by an equal-weight BRICS ex China index that we created have been heading down year to date while the yuan has been heading sideways, yet another alligator mouth. This is a similar setup to August of 2015 which foreshadowed a period yuan devaluation. Outside the BRICS, the Turkish lira and Argentine peso have also plunged recently versus the dollar indicating that the Fed’s tight monetary policy could be leading to a strong dollar similar to the late 1990s which catalyzed both the Asian and Russian currency crises. 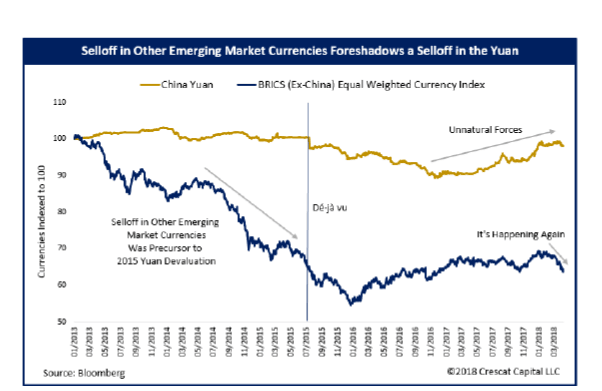 4. Access to dollar credit is tightening up as measured by the Goldman Sachs US Financial Conditions index which considers long-term Treasury yields, the federal funds rate, the trade-weighted dollar, the S&P 500 Index, and investment-grade credit spreads. Note the negative correlation in the chart below between the GS US Financial Conditions Index and emerging market stocks that rely on dollar credit. 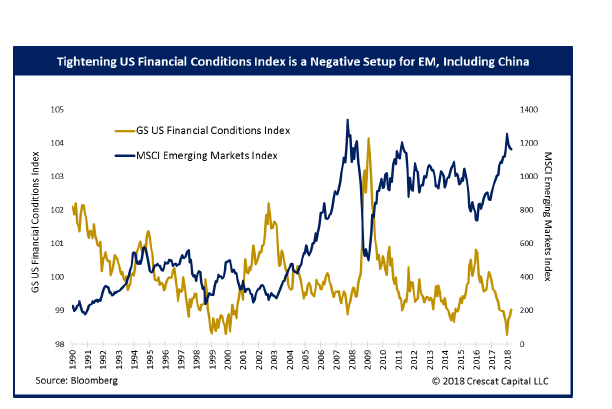 5. Finally, the potential for a global dollar funding crisis is perhaps best illustrated by the recent widening of the LIBOR-OIS spread which is the widest since the Global Financial Crisis and looks similar to the same curve just prior to the Lehman default.

China has dollar-denominated debt in its banking and corporate sector as well as dollar swap obligations in the FX market that China has used to maintain a strong currency against capital outflow pressure. While much of this debt is opaque, it is possible and even likely that China’s dollar obligations exceed its dollar foreign reserves making China dollar net short. Fed tightening makes it difficult for China to service and refinance its dollar denominated debt without selling its foreign reserves.

Whether the next downturn will be stagflationary or deflationary is a big debate. Considering all the compelling arguments for each side that we list below, it’s difficult to build too strong of a conviction on one side or the other at this time:

We must consider a wide range of possible macro environments playing out. The current late cycle overheating risks point to rising inflation, with “cost push” forces becoming more apparent. If history repeats itself, the Fed is likely to tighten until asset bubbles burst (stocks, corporate credit, real estate perhaps). Then we have to be concerned about deflationary pressures emerging. If they do, the Fed should and would likely move substantially and quickly back to QE, shifting our concerns back to rising inflation. Under this situation worries of stagflation arise, or even hyperinflation at the extreme. Those kind of macro markets are real but have been left for dead for some time. They could easily re-emerge to surprise the vast majority of investors since that is what highly imbalanced markets tend to do at major inflection points. Somewhere along that spectrum is a 1973-74 kind of bear market with rising inflation, declining bonds, and plunging stocks.
Whether inflation really takes root all boils down to inflation expectations. Inflation expectations are drawn from surveys and hard data, but they are often driven by human behavior. People begin to believe and act as though inflation is coming then it becomes self-reinforcing, causing money velocity to rise and pushing investors into inflation hedge assets. We worry that some investors might still be fighting the last war and thinking the next downturn will play out again like 2008, i.e. deflationary. While that is a possibility, the increasing concerns over inflation make these arguments very convoluted. Rather than making a major call on inflation versus deflation at this point in the business cycle, we choose instead to focus on shorting Chinese stocks, the yuan, and US stocks which can win big in either a deflationary or inflationary downturn.
Gold remains an excellent long hedge for us under the ultimate inflationary scenario that we see playing out. Gold is also a haven asset with deep-value properties for added protection in the deflation scenario. Looking at the crisis periods highlighted in the first chart, gold vastly outperformed the broad market and treasuries during inflationary bust periods on an average annualized basis. Gold also held up very well during crises characterized by declining inflation, dropping by only 1% on an average annualized basis during those periods. 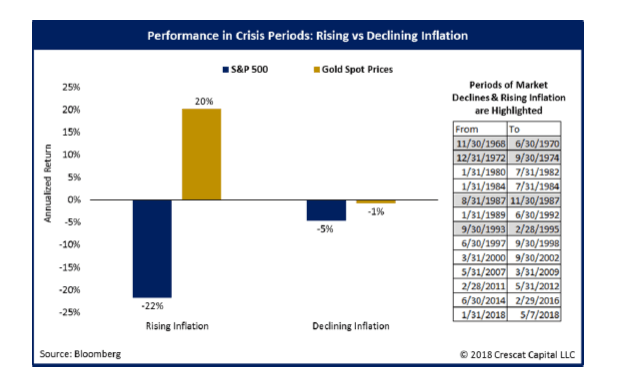 However, there was one crisis period of declining inflation where gold underperformed that is unlikely to be relevant today. During the early 80’s double dip recession period highlighted in the first chart (1/31/80-8/31/82), US inflation rates were cooling down after recently hitting very high levels, the complete opposite to our present situation. If we remove that outlier period from the calculations in the chart above, gold was in fact up an average annualized 4% during the crisis periods of declining inflation. Whether you side with the inflation or disinflation arguments summarized in the table above, past crises show that gold is poised to perform well regardless of whether the next bust is characterized by inflation or disinflation.
Q1 2018 Performance Attribution by Theme:
Our best performing theme during Q1 2018 was Maturing Expansion, with US late cycle short positions contributing to returns as the broad market came under pressure. Discontinued Themes was driven predominantly by Millennial Wave (long positions in ETSY, ADBE, BKNG) and Rise of the Machines (long positions in RHT, MSFT, INFY). China Currency & Credit Bubble worked against us in January, and Global Fiat Currency Debasement had a difficult February, but we have strong conviction in both themes as outlined above and these themes have been improving more recently. 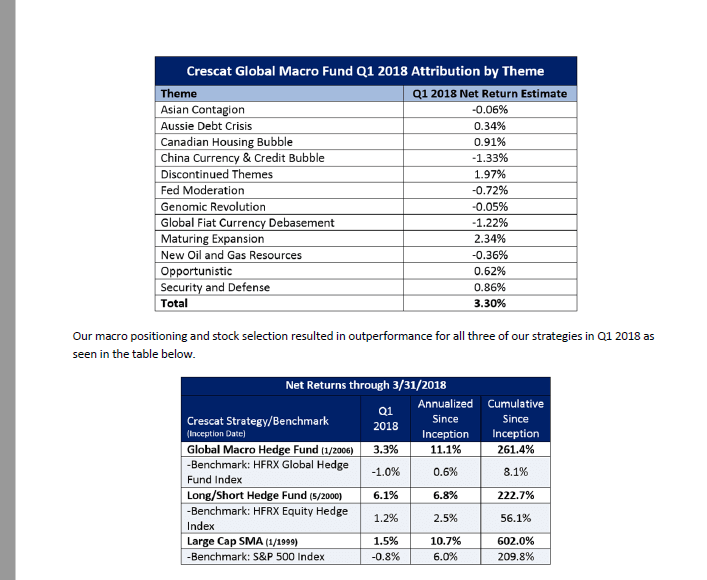 Our macro positioning and stock selection resulted in outperformance for all three of our strategies in Q1 2018 as seen in the table below. 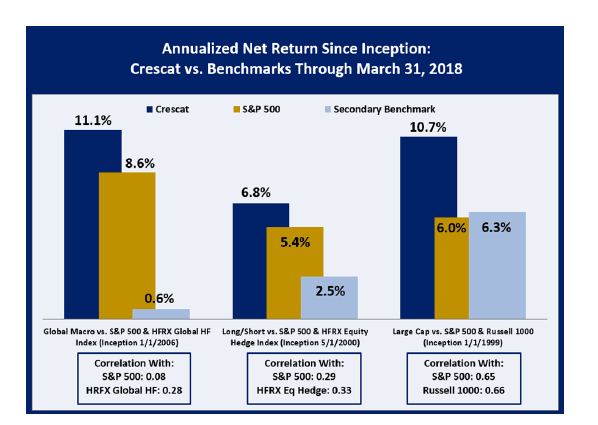 Over the long term, Crescat has delivered strong absolute and risk-adjusted performance when compared to benchmarks and other managers. We generate this performance while maintaining very low correlation with the market at large. Our outperformance and low correlation is seen in the chart below. These measures are reflective of our unique investment process combining macro and fundamental quantitative models.
Sincerely,
Kevin C. Smith, CFA
Chief Investment Officer
Tavi Costa
Emerging Markets Analyst
Nils Jenson
Energy and Materials Analyst
© 2018 Crescat Capital LLC