ValueWalk
Home Economics What Is Going On With REIT ETFs? 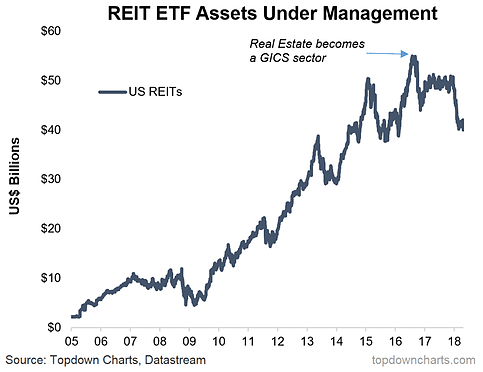 This week it’s a chart of US REIT ETF Assets Under Management, but basically as a prompt to talk about some previous and upcoming changes to the ubiquitous GICS system.  The previous change was implemented in September 2016 and saw the new Real Estate sector split out from financials.  Sure enough this ended up being the top for REITs (although of course as we know that had much more to do with the broader macro trends i.e. the bottom in bond yields).

The chart comes from a report on the tactical allocation outlook for US REITs.  REITs have been beaten severely by the surge in bond yields, with US REITs falling some -17% top to bottom, vs the more recent fall in the S&P500 which was just over -10% top to bottom.  The move has left REITs looking oversold, particularly if you look at REIT relative price movement compared to US commercial real estate.  The thing is though, the specter of another surge in bond yields remains a risk for the sector.

But back on to the GICS topic – GICS stands for Global Industry Classification Standard, and is a standardized method of classifying public companies by sector/industry group/industry/sub-industry (respectively), and was developed jointly by MSCI and S&P.  Aside from the previous change to split Real Estate out as its own sector, the upcoming changes (to be implemented at the end of September this year) will involve a rejigging and renaming of the shrinking telecoms sector – a once relatively boring and defensive sector will change fundamentally.

Telecoms will be renamed “Communication Services” (it will comprise the existing telecoms, and a new industry group called Media & Entertainment comprised of selected tech stocks and consumer discretionary stocks).  The changes will involve a shuffling around of the so-called FAANG stocks, and will see some “tech stocks” taken out from the bloated tech sector – which comprises about 25% of the S&P500.  The biggest implication will be for investors who allocate at a sector level.  And on a final, slightly facetious note, one can’t help but wonder if these changes will mark a top for FAANGs (or tech? or “communication services”?).

Article by Top Down Charts