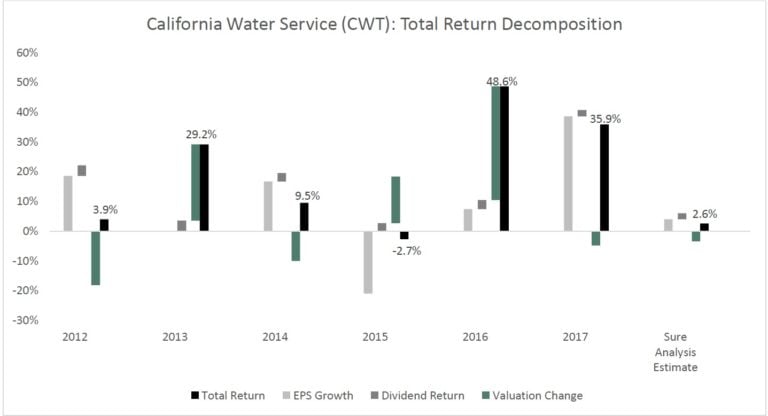 California Water Service is the 3rd largest publicly-owned water utility in the U.S., with a market cap of $1.8 billion. It has six subsidiaries, which provide water to approximately two million people in California, Washington, New Mexico and Hawaii.

While utilities are characterized by low growth rates, CWT grew its revenues by 9% and its earnings per share [EPS] by 39% last year. The impressive growth mostly resulted from the rate hikes that were approved by the regulatory authorities in 2015. Thanks to this strong performance, the stock rallied 50% from the end of 2016 to the end of 2017. This is obviously an exceptional performance for a utility stock.

However, this year, the regulatory authorities have proposed to reduce the return on equity of CWT from 9.4% to 8.2%. If this proposal is eventually adopted, it will mark the lowest return on equity authorized by any state commission and will force the company to reduce its rates by about $13 M per year. While the company is in discussions with the authorities, the outcome is uncertain.

Moreover, after years of record-low interest rates, the Fed has begun to raise them aggressively. As investors can now find decent yields elsewhere, the dividends of utility stocks have become less attractive. Therefore, given also their huge debt loads, utility stocks are the most vulnerable to the uptrend of interest rates. This has certainly been the case for CWT, which has plunged 18% in the last three months.

While CWT grew its EPS by 39% last year, investors should not expect similar growth rates in the upcoming years. Just like most utilities, CWT is a typical, slow-growth utility. Due to the strict proposal of the regulatory authorities for the rate hikes of this year, the analysts expect the EPS to grow only 1.4% this year, from $1.40 to $1.42.

Since 2008, CWT has grown its EPS at an average annual rate of 4.4%. The company is likely to continue to grow at a similar rate in the long run thanks to the rate hikes approved by the authorities, as the latter need to continuously encourage the company to keep investing in the expansion and maintenance of its network. In fact, the authorities are forced to determine the optimum rate hikes in order to satisfy both the company and the end consumers, who want limited price hikes but also benefit from the investments of the company. Therefore, it is reasonable to expect CWT to continue to grow its EPS by about 4% per year in the next five years, from $1.42 this year to $1.73 in 2023.

CWT looks significantly overvalued at current prices. The utility is trading for around 26 times expected 2018 earnings. This is absurd for a slow-growth utility. We are giving CWT the benefit of the doubt and estimating a fair P/E of 22, which is around its historical average. If interest rates rise significantly, the P/E could fall much further than 22.

As a typical utility stock, CWT spends excessive amounts on capital expenses every year and thus carries a high amount of debt. Nevertheless, thanks to its reliable cash flows, it is not likely to have any problem servicing its debt.

In addition, thanks to these reliable cash flows, it is one of the most recession-proof stocks. In the Great Recession, while most companies saw their earnings collapse, CWT grew its EPS by 27% in 2008 and 2% in 2009. Whenever the next recession shows up, CWT is likely to outperform the market once again. In addition, in such an event, the interest rates are likely to fall and will thus help mitigate the contraction of its P/E ratio.

Due to its 50% rally last year, CWT reached highly overvalued levels. Despite its recent decline, the stock still has a markedly rich valuation. Consequently, the stock is likely to offer a lackluster 2.6% average annual return in the next five years, thanks to its 4% average annual EPS growth and its 2.0% dividend yield, which will be partly offset by a 3.4% average annual contraction of its P/E ratio.

As CWT is a slow-growth utility stock, investors should be particularly careful before initiating a position. If you overpay for a slow-growth stock, it may take several years to break even. Therefore, investors should wait for a much better entry point. Even extremely conservative retirees should stay away from the stock, as its rich valuation has resulted in a lackluster 2.0% dividend yield. 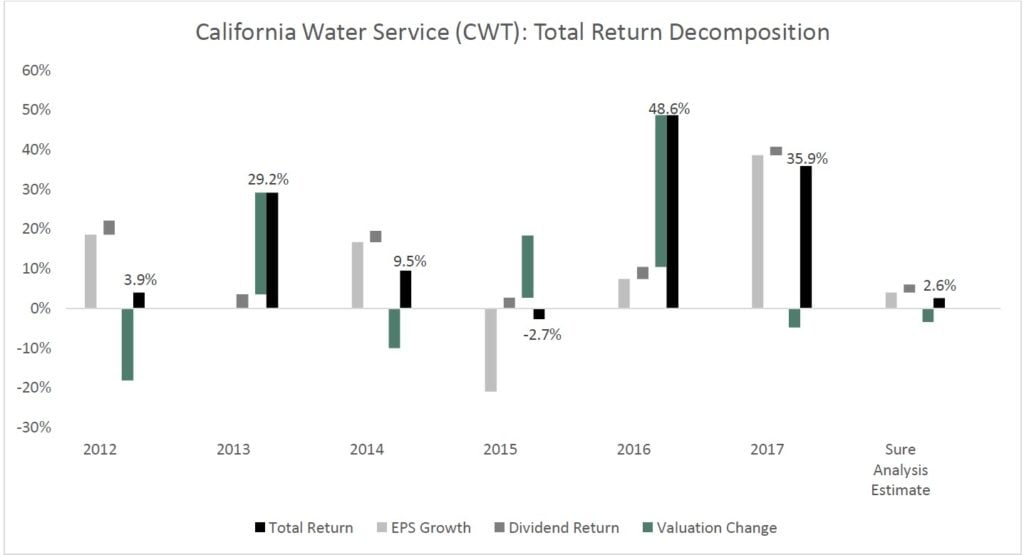 Article by Aristofanis Papadatos, Sure Dividend