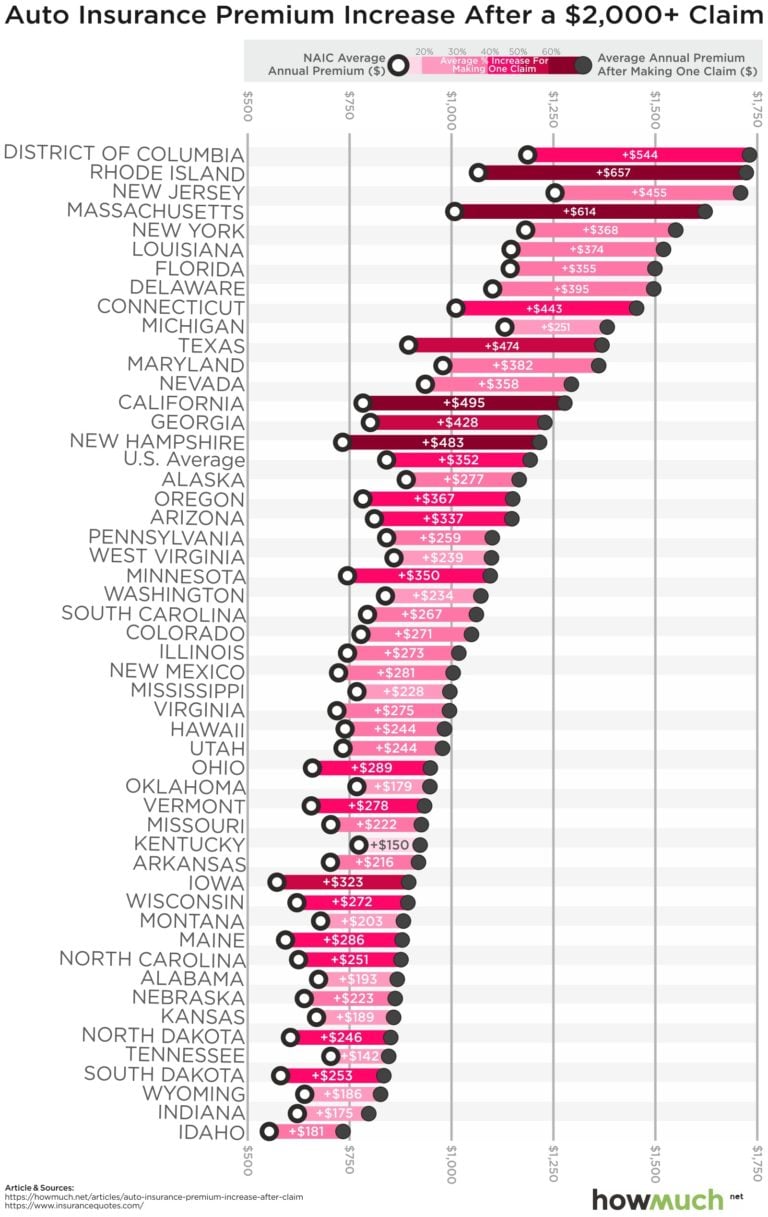 Auto insurance companies portray themselves as friendly and forgiving in television commercials, but they are less friendly than you might think. After filing just one claim, car insurance premiums increase by an average of 41.81%, according to an annual study by insuranceQuotes and Quadrant Information Services. Just how much insurance rates are increased depends on the state where you live. See how your home state compares to others in the chart below.

To create our graphic, each state was given its own line graph, with additional lines for D.C. and the national average. The first point represents the average annual premium for each state, the second point represents the average annual premium after one claim, and the gap between the two points shows the average increase after making one claim. We also color-coded each line to show the significance of the increase in terms of the dollar amount being paid by the drivers in each state. The data we used came from insuranceQuotes and the National Association of Insurance Commissioners (NAIC). To generate their averages, insuranceQuotes looked at the impact of one new claim of $2,000 or more on a married, 45-year old woman with a job, an excellent credit score, no lapses in coverage, and no previous auto insurance claims.

States with Highest Rate Increase After one Claim

States with Lowest Rate Increase After one Claim

New Hampshire is in a league of its own. Although the state’s average annual premium of $733 is below the national average of $841, it more than makes up for it with a 65.9% rate increase after filing one claim, the highest percentage increase in the nation. After the rate hike, premiums in New Hampshire average $1,216.

For overall premium cost, however, Rhode Island has New Hampshire beat. After just one claim, America’s smallest state has the seventh-highest average premium at $1,066 thanks to the third-highest percentage rate increase of 61.7%. That means drivers in Rhode Island will pay an additional $657 per year on car insurance after one claim, the highest increase in the country dollar-for-dollar.

When looking at our chart, an interesting pattern emerges—all of the largest increases in premiums occur in states that start out with higher premiums, even without any claims having been filed. In most of the states where the premiums start out below the national average, their average rate increases are also lower. Unfortunately for drivers in states like Texas (53% increase after a claim) and Connecticut (43.8%), their premiums start out high and only get worse. Other places, however, start out so low that, even though they have a big jump after a claim, their premium still isn’t too bad compared to some of their neighbors.  In Iowa, for example, our hypothetical driver starts out with a premium of $572. After a claim her rate is increased by a whopping 56.5%, but she’s still only paying $895 every year.

The pattern seen with Iowa is particularly exemplified by four other states. Even after making one claim the happy residents of Wyoming ($826), South Dakota ($834), Indiana ($797), and Idaho ($734) are still paying premiums below the national pre-claim average of $841.

Auto insurance rates vary throughout the country, as do insurance premium increases after filing one claim. But in some states, like Iowa, filing one auto claim won’t increase your insurance premiums by too much because of the state’s already low average insurance costs. Nobody plans to get into an accident and file a claim, but when in one of the more expensive states, make sure to drive extra carefully!