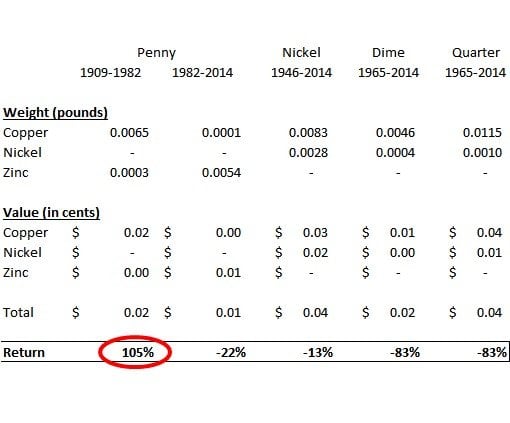 Article by Pitch the Perfect Investment

This is the second in a sporadic series called The Arbitrage Mindset. Our first post dealt primarily with an arbitrage in Dunkin Donuts gift cards.  As a refresher, the definition of “arbitrage” according to Merriam-Webster is:

“The nearly simultaneous purchase and sale of securities or foreign exchange in different markets in order to profit from price discrepancies.”

When you have the arbitrage mindset, your mind instinctively identifies arbitrage relationships in normal everyday situations. As an investor, this is an important skill to hone and cultivate.

Today’s blog post is ripped from the headlines of the Wall Street Journal.  To avoid copyright infringement, we cannot reproduce the article but here is a link to a google search to find the article, Coin-roll Hunting: the secrets of a treasure seeking hobby.

The article discusses a hobby of sorts where people go to the bank, get rolls of pennies, nickels, dimes and/or quarters, and then look for older coins like wheat-backed pennies which were minted between 1909 and 1959 and silver coins – quarters and dimes minted before 1964 (90% silver). What the article failed to mention is that nickels were actually minted with 35% silver between 1942 and 1945 because nickel and copper were needed for the war effort.

When I was a kid (late 1970’s) I was a numismitist and engaged in coin-roll hunting (although it wasn’t called that back then). I used to ride my bicycle about a mile to the local bank, get $20 worth of pennies in rolls and go through them looking for “wheaties” which are characterized by wheat stalks on the “reverse” of the coin (in numismatic nomenclature, the front of a coin is the obverse, the back is the reverse). 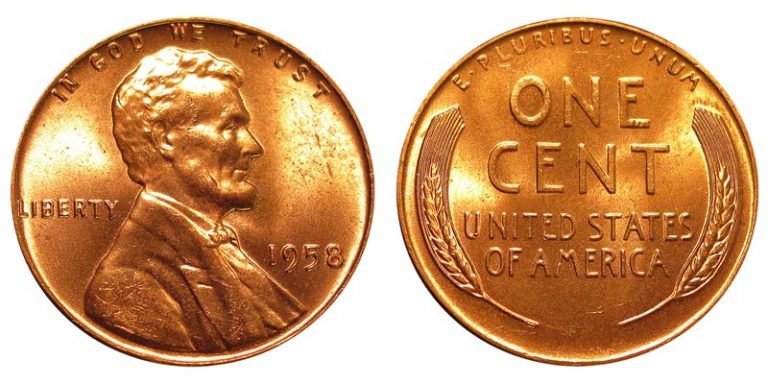 As for silver coins, I found much fewer of these, I have maybe a dozen that I got from coin-roll hunting when I was a kind. And occasionally, I will still find old coins in the change I receive. For reference, the melt values on May 7, 2018 with silver trading at approximately $16.45 per ounce are $0.93 for a nickel, $1.19 for a dime and $2.98 for a quarter. Remember this is for nickels between 1942 and 1945 and dimes and quarters before 1964.

In 1979, the minimum wage was $2.90 per hour so even at today’s prices coin-roll hunting wasn’t a good arbitrage for me (but I guess it kept me out of trouble).

But there is sometimes an arbitrage with modern day coins which fluctuates with the commodity prices of copper, nickel and zinc. Below are “melt values” for different US coinage given commodity prices as of May 7, 2018.  As you can see there is quite a large arbitrage from melting down pennies before 1982 for their copper. Other coins would produce a loss.

Except as specifically authorized by the Secretary of the Treasury (or designee) or as otherwise provided in this part, no person shall export, melt, or treat:

(a) Any 5-cent coin of the United States; or

(b) Any one-cent coin of the United States.

There is actually an exception to the the rule which states: “The exportation of 5-cent coins and one-cent coins having an aggregate face value amount of not more than $5 carried on an individual, or in the personal effects of an individual, departing from a place subject to the jurisdiction of the United States.” What this means is that if you have more than $5 of 5-cent or one-cent coins on your person when leaving the country you are in violation.

Moral of the story, “coin-hunting” is not an arbitrage and while melting pre-1982 pennies can be extremely profitable, it can land you in jail.  Finally, don’t leave the country with too much change in your pockets…