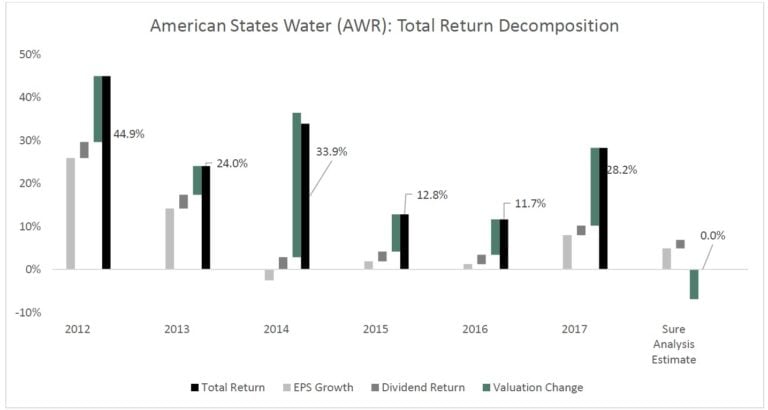 During the most recent quarter American States Water grossed revenues of $104 million, down two percent year over year. The company’s profitability increased, though. Earnings per share (adjusted) totaled $0.36, up 20% from $0.30 in Q4 2016. Full year earnings were up handsomely as well, EPS increased from $1.62 in 2016 to $1.75 in 2017. This allowed the company to increase its dividend by slightly more than five percent during the last year.

During 2017 American States Water was awarded new contracts for wastewater services on several US military bases. Each of these contracts spans a 50-year period. These service contracts should positively impact the company’s results over the long run.

American States Water is operating in a low-growth industry, therefore its earnings per share growth rate isn’t very high. During the last five years the company’s EPS grew by just 4.4% a year, but on the other hand the company managed to increase its profitability even during the last financial crisis.

American States Water has increased its dividend for more than fifty years in a row, the dividend growth rate was 9.1% during the last five years, which was possible due to some payout ratio increases.

The company is building out its services business by getting contracts for wastewater services on additional US military bases. American States Water should be able to increase its profits going forward. A mid-single digits earnings growth rate seems quite likely, based on expansion of the services business and some profit increases for the utilities business.

The growing impact of American States Water’s services business is visible in the above table. The services business is less asset-heavy, and expansion of that business segment therefore allows for a rising gross profit to assets ratio. Debt levels as a percentage of all assets have been declining, and at the same time the company’s interest coverage has risen drastically (which is a huge positive).

Utilities are not cyclical, and due to the decades-long contract durations with the US military the services business is not cyclical either. American States Water hence is quite recession-proof. There is only low risk of an earnings decline (during the last financial crisis profits kept increasing). Refinancing shouldn’t become a problem either, thanks to rising interest coverage ratios. The dividend payout ratio bottomed in 2012 and has been rising gradually since, it will probably not rise much above the current level, as American States Water keeps spending money on its utilities assets and the expansion of its services business.

American States Water is not cyclical at all and has performed steadily for many decades, including during recessions. The company’s shares have gotten quite expensive though, and multiple contraction over the coming years seems much more likely than further multiple expansion. This, coupled with an earnings growth rate that will not be very high, limits the share price appreciation potential.

Investors get a safe dividend, but due to the high valuation the shares trade at right now, total returns will likely be negligible over the coming years. Investors seeking safety and reasonable total returns have better choices elsewhwere. 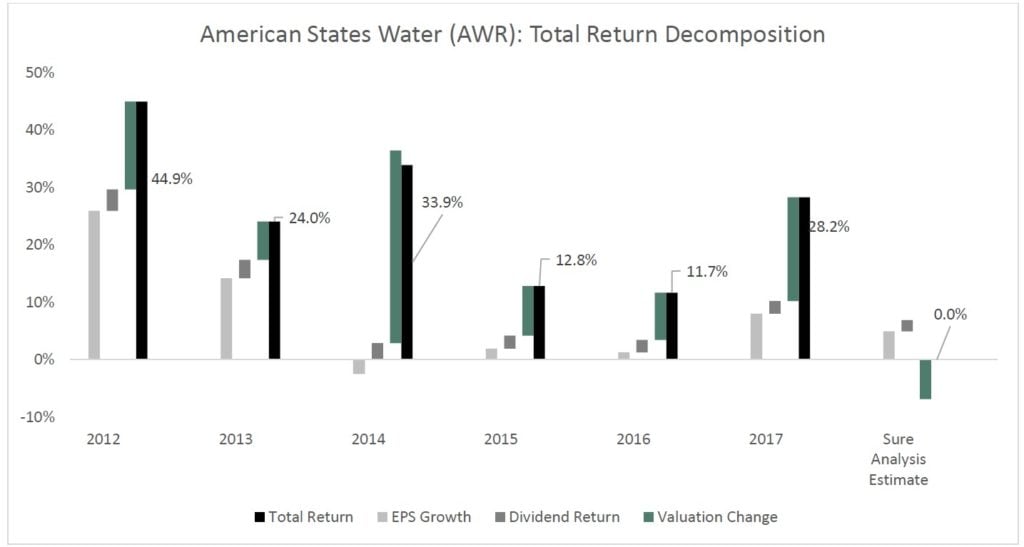 Article by Jonathan Weber, Sure Dividend