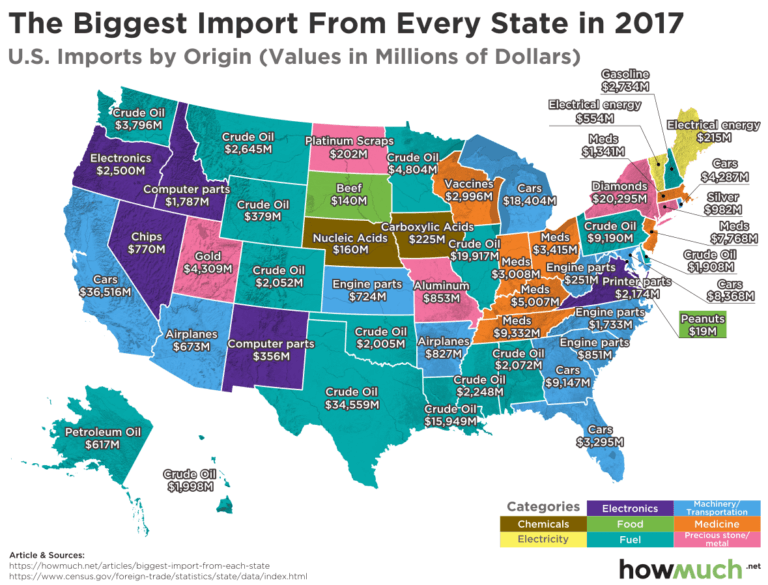 President Trump’s trade war rhetoric is causing a fair amount of economic uncertainty right now. Is he planning to implement tariffs on imported goods from other countries or not? And what about other countries planning their own tariffs on American-made goods? All this back-and-forth debate got us thinking about which industries import the most goods in every state.

The U.S. Census Bureau tracks all sorts of things, including imports and exports moving into and out of each state. Our numbers represent the total value ($M) of goods with a final destination in that state last year. For example, Missouri imported $853M in aluminum in 2017, the highest figure for any sector in the state. All of that aluminum no doubt originated in a wide variety of other countries. We color-coded each industry by its broader category, creating a snapshot of imports on a state-by-state basis.

Top Ten States with the Greatest Amount of Imports ($M)

There is one particularly obvious industry on our map: nobody sitting in L.A. traffic would be surprised that California imports a lot of cars ($36,516M). For the most part, though, there are a handful of surprising clusters around the country, including a group of Midwestern states shaded in orange that are importing millions in medicine. Engine parts dominate the import sectors in North Carolina and South Carolina. All but one state touching the Gulf Coast has its top import from crude oil.

Perhaps the most surprising fact is that so many states import the same type of goods that they export. For example, Texas simultaneously imports $34,559M in crude oil and exports $23,365M in crude oil each year. And it’s not just oil—the same can be said about other industries as well. Tennessee imports $9,332M of medicine each year and exports medical appliances at about $2,320M. Diamonds top the charts in both imports and exports for New York. Computer parts and electronics move in and out of New Mexico more than any other industry.

There are a couple of possible explanations for this phenomenon. First off, things like crude oil are always priced and sold on the global market. That means a Texas oilman can sell his product to a global distributor in Houston, then get his truck’s oil changed with stuff that actually originated in Saudi Arabia. Second, and more importantly, the U.S. Census Bureau calculates imports as the “final” place something is purchased, but that’s not necessarily where it is consumed or used. For example, a company in Texas might buy crude oil from abroad, then process it in one of its 30 refineries, and then sell it to another company which ships it to a different state where it is actually used. The crude oil still counts as an import for Texas but it would take a whole separate article to track where the resulting petroleum products are actually consumed.

Our map represents a quick view of over $263M in top-ranked imports to states around the country. That’s a big slice of the import market, but remember that the total market for imports of goods and services is around $2.7 trillion! President Trump’s trade war rhetoric is therefore potentially more harmful to a much broader swath of the American economy than what our map can capture. That being said, these are some of the industries most at risk if other countries institute counter-tariffs on American goods.