ValueWalk
Home Info-Graphs The 10 Wealthiest Countries In The World

According to market research company New World Wealth, the world has accumulated $215 trillion in private wealth, a 12% increase over the last year.

Since founding his investment partnership in 1983, Seth Klarman has offered a stream of wise and timeless commentary on markets and the craft of investing. His commentary from periods of market volatility is incredibly insightful. Klarman's letters to clients around the time of the dot-com bubble and financial crisis in 2008/09 contained timeless insights on Read More 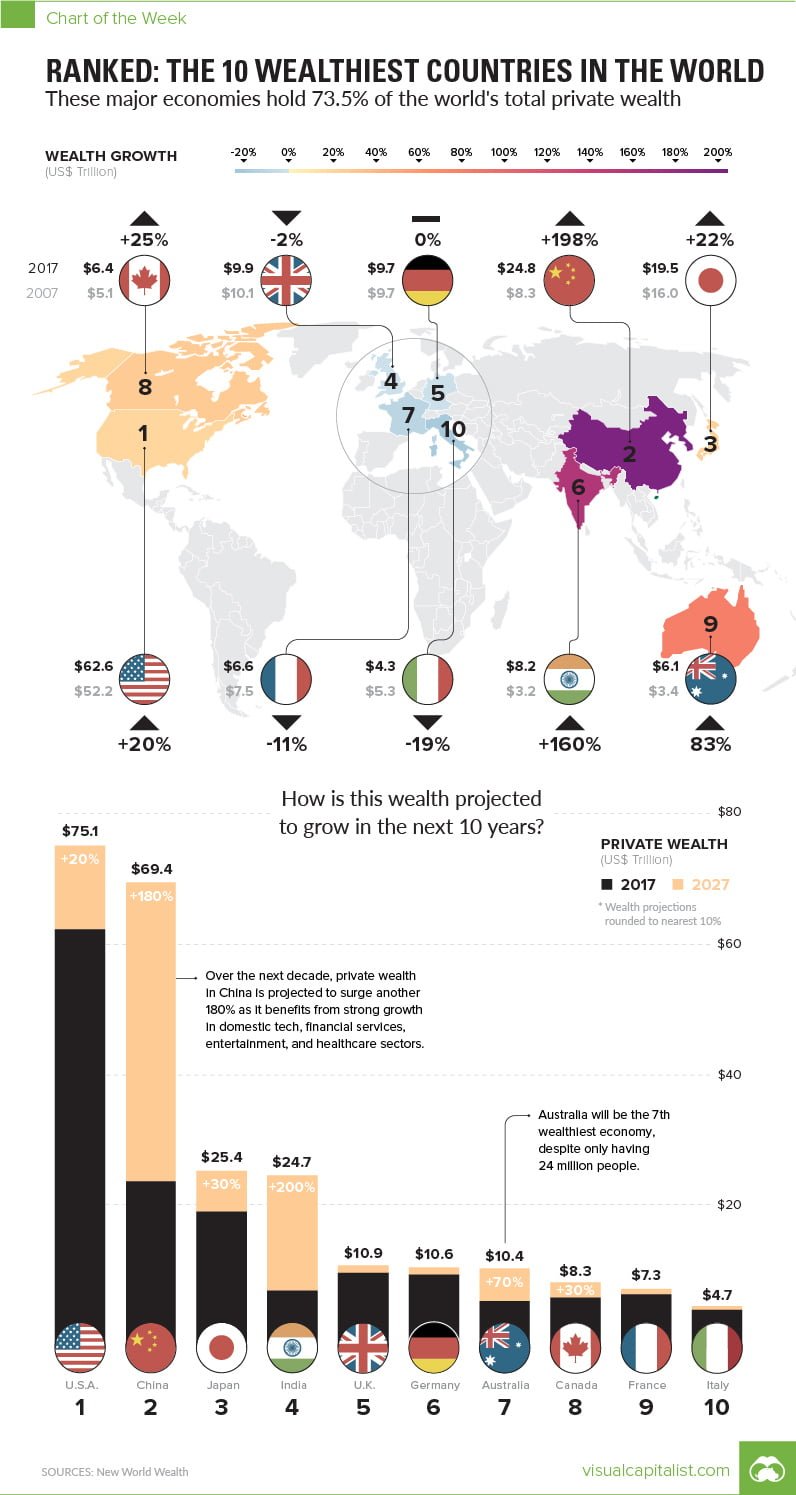 Incredibly, the vast majority of this wealth – about 73.5% – is held by just 10 countries:

Over the last decade, China and India have more than doubled their wealth. Meanwhile, developed economies like the United States and Japan have increased wealth at modest rates – and some, like Italy and France, even lost modest amounts of private wealth over that duration of time.

Finally, it should be noted that the United Kingdom’s decrease above is mainly due to the depreciation of the GBP, which dropped in dollar terms from roughly $2.00 to $1.35 over the decade in question.

How is global wealth expected to shift in the future?

According to New World Wealth, the same 10 countries will dominate the landscape – but the order will change considerably over the next decade:

While the ranking order of the top three wealthiest countries will remain the same, India is expected to shoot up 200% to claim the #4 position with $24.7 trillion in private wealth.

Meanwhile, France and Australia are two other significant movers – and they are going opposite directions.

France will continue its descent down the ranking to 9th place with just 10% growth in a decade, and Australia will increase wealth at a rate that is very impressive for a developed economy. By 2027, it’s expected to be the world’s seventh richest country in terms of private wealth, with a total of $10.4 trillion. That will rival powerhouses like Germany and the United Kingdom, each with private wealth near the $11 trillion mark.

For more on private wealth, see the 15 wealthiest cities as well the countries that are gaining (or losing) wealth at the fastest rates.