Our conference on The Art, Pain and Opportunity of Short Selling is only three weeks from tomorrow on Thursday, May 3. I’ve seen some of the presentations and it’s going to be EPIC!

The early bird rate is currently $3,000, but you can save 20% (dropping the price to $2,400) by using my friends and family discount code, FF20. Don’t delay, as the early bird rate expires on Sunday and the price jumps to $4,000. You can register here: http://bit.ly/KaseRegister.We’re offering students admission for only $950 – just use discount code SCSTUDENT and be sure to register using your school email address.

2) There’s been a lot of interest in our three-day Lessons from the Trenches bootcamp and one-day seminar on How to Launch and Build an Investment Fund (see attached for information about all of our programs), but many folks can’t make the next ones we’ve scheduled (April 29-May 2 in NYC and July 8-11 in Trani, Italy) because either the dates or locations don’t work.

To meet the demand, we’re collecting contact information from interested people and, once there’s a critical mass of at least a dozen folks, we’ll schedule a bootcamp and seminar specifically for them at a convenient time and location

For example, a half dozen people have emailed me expressing an interest in another program in NYC, and the same number for one in London this fall. Once we get to a dozen in any city, we’ll determine which days are best for the group and schedule it. Other cities we’re considering include San Francisco, Toronto, Frankfurt, Zurich/Geneva, Sao Paulo, Hong Kong, Shanghai, Singapore, Mumbai and Sydney. Over time, I expect that we’ll end up doing 6-8 programs annually, alternating between NYC and going on the road (which Glenn and I are looking forward to!).

If you might be interested in attending our bootcamp and/or seminar if we schedule one in your city, please email me and let me know.

3) Jesse Koltes, who publishes the excellent blog, The Charlieton, interviewed me recently and posted the first part of it here: http://thecharlieton.com/whitney-tilson-why-the-hell-didnt-i-listen-to-charlie-munger. In it, I describe for the first time my phone calls with Buffett and Munger in early 2002, when Bill Ackman, Guy Spier and I were being investigated for market manipulation by the SEC and the NY Attorney General (run then by Eliot Spitzer) because we’d spoken out about our short positions in two politically connected companies, Farmer Mac and MBIA (this was a time when activist shorting was virtually unheard of). Nothing ever came of the investigations because we’d done nothing wrong (and our analysis was later proven 100% correct in both cases), but it was incredibly stressful. Excerpt:

Charlie had some very interesting things to say. The first thing he said was, and I still remember the exact tone of voice and his exact words. He said, “First of all, Whitney, you and Bill are exactly right about MBIA.” Then, he said, “The idea that anyone would ever think that this company is triple A is so ludicrous,” in those exact words.

I was feeling pretty good—my hero thinks my analysis was correct!

“You know, Whitney, shorting is a tough business.” He said, “I remember back when I was just a young guy and I shorted a few stocks. I remember I’d shorted the Yen once and they all ended up working out but the Yen doubled against me or something before it finally worked out.” He said, “It cost me a lot of sleepless nights.” He said, “I eventually concluded that just wasn’t worth it and I stopped doing it. That would be my advice to you, Whitney.”

Then he paused, sort of like he was almost speaking to himself. He sort of chuckled and said, “You know what? Every young guy seems to have to learn this for himself.”

I look back on that moment as one of the great mistakes of my career – why the hell didn’t I listen to Charlie Munger? Charlie Munger himself, my idol, told me, “Whitney, just don’t do it.” Instead, I did it for another 15 years and it was still early. I’d only shorted two stocks in my life up to that point.

Here I am hundreds of stocks later, millions of dollars of losses later. If I was really clever, I would have stopped right then. I would have listened to Charlie Munger.

4) I really enjoyed this fascinating article: The Freakishly Strong Base, www.collaborativefund.com/blog/the-freakishly-strong-base. Excerpt:

What if Buffett got serious about investing when he was age 22 – just out of college – instead of age 10? Imagine he spends his 20s learning about investments, and his net worth at age 30 was in the still-impressive 90th percentile. Using today’s net worth percentiles and adjusting them for 1960s-era inflation, that would mean he’d be worth about $24,000 at age 30.

Now we can do some fun calculations.

If, at age 30, Buffett was worth $24,000 instead of the $1 million he actually accumulated, and went on to earn the same returns, how much would he be worth today?

The punchline is that 97.6% of Buffett’s current success can be directly tied to the base he built in his teens and 20s. Like World War II-era stuff.

5) A few people have asked how we calculated investments and operating earnings per share for Berkshire Hathaway to arrive at our estimate of intrinsic value (see page 11 of our slide deck, which is always posted at: www.tilsonfunds.com/BRK.pdf). This was easy through 2015, as Buffett provided both numbers in every annual letter, but he didn’t in 2016 and 2017 so investors now have to calculate it. Here are our calculations: 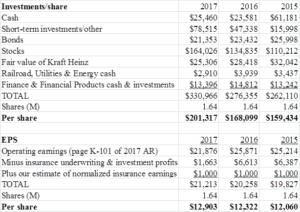 Both numbers we calculated tie nicely to the 2015 numbers Buffett provided: $159,794 and $12,304. In the latter number, Buffett for the first time in 2015 included “insurance underwriting income” (see page 9 of his annual letter for a discussion of this). We thought he was being too conservative in excluding this profit in previous years, in light of the fact that Berkshire’s insurance underwriting income has averaged $2 billion annually for the last 14 years, so we historically had added half of this – $1 billion or $610/share – to EPS. We see no reason to stop doing this.

In 2015, insurance underwriting income was $1,837 (insurance investment income was $4,550), so we subtracted that out and then added back $1,000 to arrive at $12,060. Using Buffett’s methodology, counting all insurance underwriting income, earnings would have been $12,600, only 2.4% different from the number Buffett gave in his 2015 annual letter, so we’re satisfied that our methodology is sound for calculating EPS in 2016, 2017 and future years.

"A really efficient totalitarian state would be one in which the all-powerful executive of political bosses and their army of managers control a population of slaves who do not have to be coerced, because they love their servitude."
- Aldous Huxley, Brave New World

Here is a look into the not so distant future:

CALLER:
Is this Tony's Pizza?

CALLER:
I must have dialed a wrong number. Sorry.

CALLER:
OK. I would like to order a pizza.

CALLER:
My usual? You know me?

FACEBOOK:
According to our caller ID data sheet, the last 12 times you called you ordered an extra-large pizza with three cheeses, sausage, pepperoni, mushrooms and meatballs on a thick crust.

FACEBOOK:
May I suggest that this time you order a pizza with ricotta, arugula, sun-dried tomatoes and olives on a whole wheat gluten-free thin crust?

CALLER:
What? I detest vegetables.

CALLER:
How the hell do you know?

FACEBOOK:
Well, we cross-referenced your home phone number with your medical records.
We have the result of your blood tests for the last 7 years.

CALLER:
Okay, but I do not want your rotten vegetable pizza!

I already take medication for my cholesterol.

FACEBOOK:
Excuse me sir, but you have not taken your medication regularly.
According to our database, you only purchased a box of 30 cholesterol tablets once, at Drug RX Network, 4 months ago.

CALLER:
I bought more from another drugstore.

FACEBOOK:
That doesn’t show on your credit card statement.

CALLER:
I paid in cash.

FACEBOOK:
But you did not withdraw enough cash according to your bank statement.

CALLER:
I have other sources of cash.

FACEBOOK:
That doesn’t show on your last tax return unless you bought them using an undeclared income source, which is against the law.

CALLER:
WHAT THE HELL?

FACEBOOK:
I'm sorry, sir, we use such information only with the sole intention of helping you.CALLER:
Enough already!

I'm sick to death of Google, Facebook, Twitter, WhatsApp and all the others. I'm going to an island without internet, cable TV, where there is no cell phone service and no one to watch me or spy on me.

I understand sir, but you need to renew your passport first.  It expired 6 weeks ago…

8) I added another chapter to my ongoing midlife crisis this past weekend, doing a 12-hour GoRuck Tough starting Saturday night at 10pm. I’ve posted pictures and description on Facebook here: www.facebook.com/wrtilson/posts/10156165247858632. Here’s a pic of me at the end of event on Sunday morning at the WWII Memorial in Battery Park: