ValueWalk
Home Economics While Markets Scramble For Direction, On The Edge Of The Cliff, Turkey...

The catalyst for a deep repricing in markets can be entirely endogenous, within the space of its dangerous and fragile market structure.

Alternatively, the list of exogenous catalysts is famously getting longer and longer: trade wars / capital wars between the US and China, political and geopolitical uncertainty, policy normalization (QT), inflation reborn, debt and deficits, etc

In the last few days, we added an important and overlooked exogenous factor to the list: Turkey.

As we speak, the Turkish lira is losing ground at pace, down 7% this year, 40% in 2 years, 124% in 5 years. The move is mirrored by the Russian Ruble, which is heading towards the weakest levels reached during the oil slump in 2015/2016, when brent crude traded as low as 27$/bbl (it is 70$ now). US sanctions on Russian oligarchs and recent tensions in Syria are behind the recent 10% move. For Turkey, the narrative blames it on political uncertainty under Erdogan (challenge to constitutional rights, over 40 thousands people arrested, 800 companies confiscated in the last few months, the highest unemployment in 7 years at 13%), geopolitical instability in the region, fears of trade wars escalation, etc

Now, such large devaluations would matter to any country. But particularly to a country like Turkey, that has:

It matters all the most as inflation is reborn, QE is fading and rates are on the rise. When a lot of debt denominated in hard-currency meet rising rates and a fast-weakening currency, the probability of a default rises.

On Saturday, Hurriyet newspaper revealed that Dogus Holding, one of Turkey’s largest conglomerates, was in talks with several banks to restructure TL23.5bn ($5.81bn) in debt. Just in September last year, Turkey was still dealing with its largest debt default, Otas, on a $4.75bn loan.

In recent years, Russell Napier – editor of the Solid Ground - has been vocal in highlighting the dangers with Turkey debt, even without a deterioration in the political context (which is now also at play). He saw the possibility for Turkey to introduce capital controls and/or default on obligations: contagion to other EM would ensue, as “when credit stops flowing to one emerging market it stops flowing to all of them”.

The latest acceleration in the Russian Ruble (10% off in two days) can provoke broader deleveraging on EM exposure, hitting on an already fragile context for the Turkish lira, and possibly proving to be the proverbial straw that breaks the camel's back. As the ruble suffers despite a strong oil price, the Turkish lira will instead feel a double hit: Turkey is a net importer of oil and therefore exposed to more damage to the economy and a worsening current account deficit in the process.

What happens next in Turkey can matter to global markets, as they scramble to find a direction. Turkey is yet another catalyst in a long list of rivals (butterfly effects), threatening to pop bubbles in bonds and equities globally (twin bubbles).

Turkey could have knock-on effects on global assets in more ways than one. Directly, as Turkey represents close to 5% allocation for EM debt indexes and funds (more than that for buy-the-dip oriented vehicles), in addition to foreign banks and investors exposed to their debt instruments. Indirectly, as it may concur in (i) breaking the glass ceiling of market complacency/narcosis, (ii) renewing fears on bank capital in Europe at a time of anti-EU political upheaval, (iii) pushing Turkey into more geopolitical assertiveness/militarism.

Therefore, what may matter more than just what happens in Turkey, is what happens to risk assets globally should such a vulnerability be exposed. It would be the first one of scale in quite a while, dirtying the blue light in the sky of markets made price-insensitive to risks after 10 years of QE/NIRP helped to paper over any trouble along the way.

Equity markets in the US are 9% from all-time-highs, staring down the abyss from the edge of the cliff, as they bounced off the 200-days moving average and trend-line 5 times in just two months, neatly, like a ball bounces off a floor. However, the moving average is no floor, and a long list of vulnerabilities may remind them of just that. Turkey just joined such waiting list.

International Debt Burdens Are Getting Heavier And Heavier

Foreign Banks Exposure on the Rise 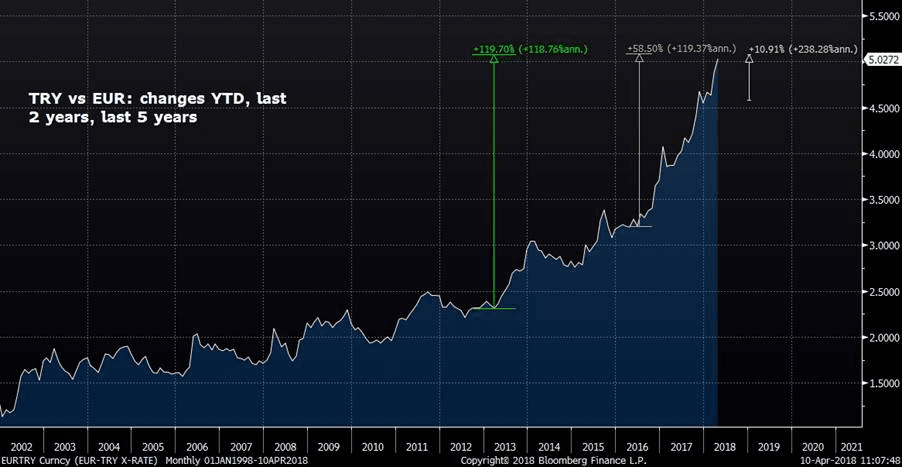 US Rates Are Rising

Not Only The Currency Is Weaker, But Refinancings Come At Higher Borrowing Costs

5.5% Of GDP And An Accelerating Trend

Highest In Quite Some Time

Authorised and Regulated by the Financial Conduct Authority (“FCA”)