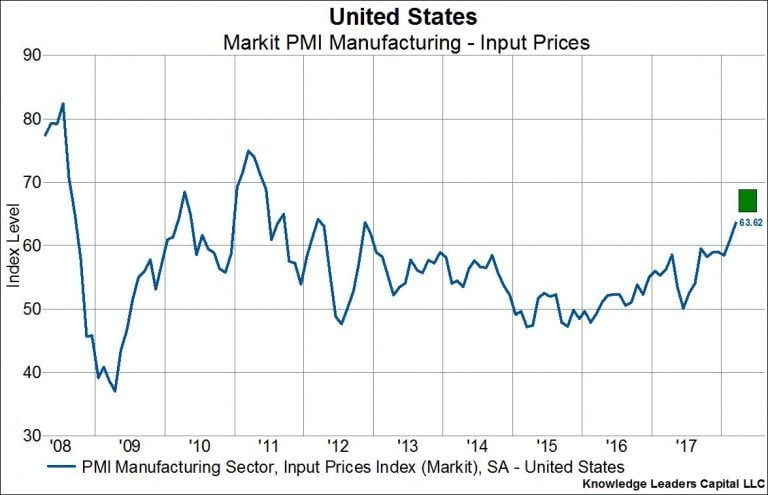 Among yesterday’s data releases was the widely followed ‘flash’ PMI report produced by Markit, which showed that the Manufacturing PMI increased to the highest level since the 4th quarter of 2014. Unlike the final report, which gets published on the first day of the month, the advanced report lacks details on specific components. Instead, the firm makes qualitative comments about the components, such as, “new orders increased” or, “inventories moved to the lows of the year”. The comments about the components are largely skimmed over by the market, but can be very useful considering market participants do pay attention the components in the final report, which is published just a week later. There was one comment in the report that was worthy enough for discussion in this forum. It was:

“Price pressures within the factory sector intensified,with the rate of input cost inflation picking up to the fastest since June 2011. Cost increases were partly linked by producers to the introduction of tariffs. Moreover, greater client demand and higher raw material prices underpinned the quickest rise in average selling prices for almost seven years.”

So, we have input costs rising to the highest level since mid-2011 driven by heightened demand for raw materials and exacerbated by tariffs. Not exactly settling considering the US Trade Representative, Robert Lighthizer, is any day due to outline which Chinese imports will be subject to the next $100bn in tariffs. Yes, this is still coming…

Because we don’t know the actual value of the input price component from the flash report, all we can do is estimate where it will end up in the final report to be published next Tuesday. Based on the comments given to us by Markit, we estimate it will print somewhere in the green box in the first chart below.

The more interesting question, though, relates to how PMI input prices correlate to actual CPI. Chart two below plots the CPI on the left axis and PMI input prices on the right axis. Clearly, there is a pretty good relationship between the two series, with PMI input prices leading actual CPI by about three months. If the relationship holds over the coming months, then this is just one more signal pointing to inflation rising toward 3%. 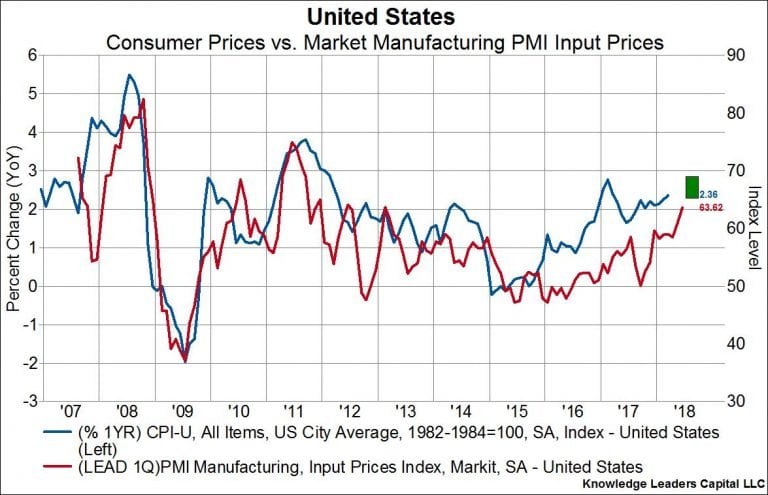