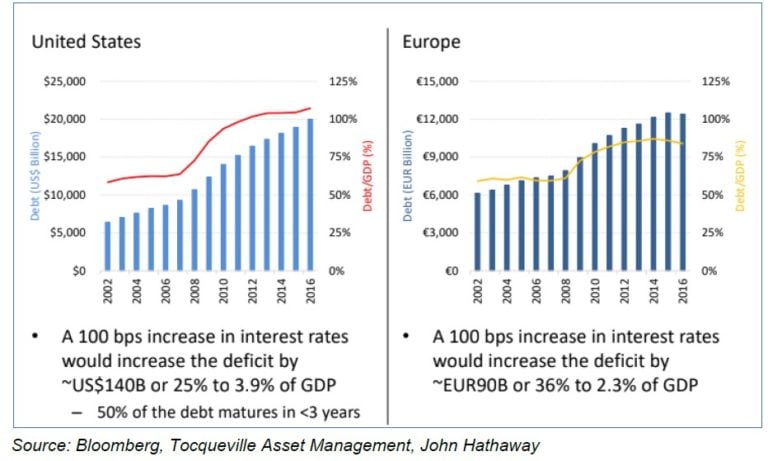 Minutes of the Advisory Board Meeting Incrementum Inflation Diversifier Fund April 12th, 2018. Incrementum recently had our quarterly advisory board discussion with special guest John Hathaway, the grandseigneur of the gold and mining industry.

Highlights of the conversation:

Prior to joining Tocqueville, Mr. Hathaway co-founded and managed Hudson Capital Advisors, followed by seven years with Oak Hall Advisors as the Chief Investment Officer. In 1976, he joined the investment advisory firm David J. Greene and Company, where he became a Partner. Mr. Hathaway began his investment career in 1970 as a research analyst with Spencer Trask & Co.

Mr. Hathaway graduated from Harvard College in 1963 (B.A.) and from the University of Virginia Business School in 1967 (M.B.A). He also holds the CFA designation.

Transcript of the conversation:

Gentlemen, welcome to this quarter’s advisory board call. I’ll start off with some housekeeping. We are currently working full time on the “In Gold We Trust Report”. It will be published on the 29th of May. One of the things we are excited about is that we have an interview with Luke Gromen about de-dollarization. We also have a lot of thoughts around the Chinese oil contract that was launched a couple of days ago. We will of course also write about Quantitative Tightening and its consequences. Additionally, we are writing about mining stocks, the combination of the blockchain technology with physical gold, the shadow gold price, Austrian business cycle theory, technical analysis of gold, financial repression etc.

As always it will be quite a read, so mark your calendars, 29th of May.

Now, let’s kick off the discussion. Let’s start with gold; the metal struggled to rise above the resistance level at $1,370, but now it seems we are at the verge of breaking this level. From a technical point of view, the sky is the limit after that. It seems like gold is indicating that the US rate hike cycle will be over pretty soon, and this will be a big surprise for market participants. We believe the Fed will have to make a U-turn and the economy will turn weaker, and at this point gold will really take off. It seems like gold is already discounting that.

John, what are your thoughts on this?

I agree, and couldn’t have said it much better myself. $1370 seems to be a key resistance level. I expect gold to discount that the economy is softer than the market thinks and that the Fed will have to abandon its stance on steady rate hikes.

I recently held a presentation where I said that the main factor that will ignite interest in precious metals is most likely a change in perception about the stock and bond markets, i.e. we need to see a bear market in both bonds and stocks before gold takes off.

think there is a lot of room for disappointment, e.g. it could come from lower earnings guidance. But at some point this resolute bullishness towards the market will change.

I believe a unifying theme that people should watch now is the fiscal peril that western democracies face, particularly the US. I follow the monthly reports on the fiscal deficit and we are already running at a rate that will exceed $1 trillion this year, and there is no way that future GDP growth will be able to support the current debt burden. The current debt in the US is around $20 trillion; the interest that is being paid on that debt is 2.4%, which is very low, but if interest rates continue to rise, it will put tremendous pressure on the deficit. Part of the thesis for gold is that we can’t cope with that sort of pressure on deficits. Markets believe the yield curve can be normalized (higher rates), but this is highly unlikely.

How would an increase in interest rates affect deficits? 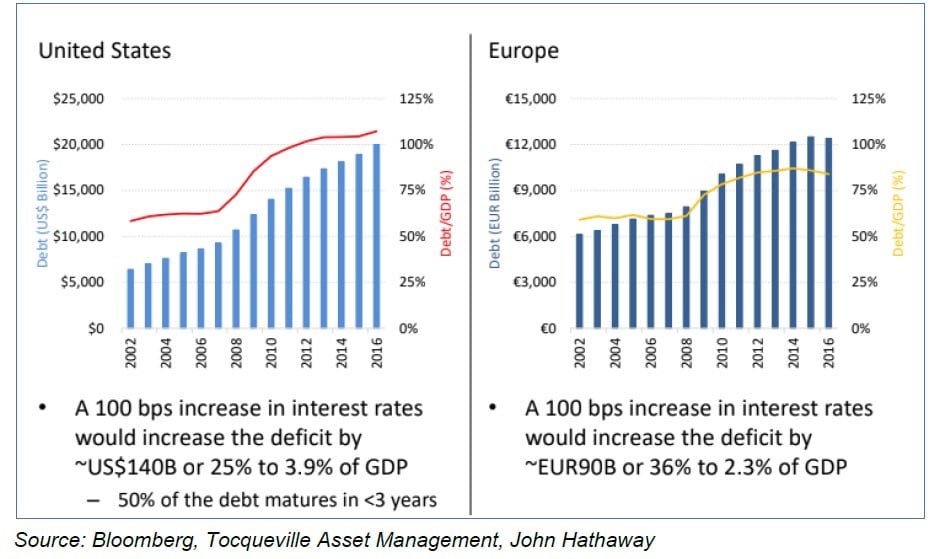 Our mutual friend Luke Gromen points out that if the stock markets stops going up, and starts going down, it’s a major headwind for the fiscal picture because a good 20% of income tax receipts comes from capital gains. 97% of individual tax receipts is paid by 5% of the population, the wealthy people, so a bad stock market is a big fiscal risk.

I believe we are at turning point for sovereign risk and I believe it can be triggered by a bad stock market, or simply headlines here and there. I focus on the US, but I don’t think it’s much different in other Western democracies.

A monetary crisis is in the cards for these reasons, and quite bullish for gold because it will trigger a new round of massive money printing.

The skeptics among us look at current stock valuations and tell themselves that this can’t go on for much longer. Government debt, as well as corporate debt, has grown out of control and something has to give at some point.

During the last two booms (tech and housing) we could point to specific sectors of the economy that were in bubble territory, however this time around everything is in a bubble. Gold is interesting at the moment because the macroeconomic factors driving gold, e.g. real interest rates, economic confidence, credit spreads, faith in the monetary authorities, are actually not currently bullish. But physical demand for gold is currently strong.

Keith Weiner tries to determine the demand for physical gold by comparing spreads between the futures and spot markets and then works out if it is worth doing arbitrage or not. From his analysis he can glean if dealers are selling gold while speculators are buying paper gold, or if anyone is accumulating physical gold. From his data we know that someone is indeed accumulating physical gold. But who is it? It’s not the little guy, because the US Mint only sold, I think, about 35,000 gold coins last year. I’m not sure about the exact number, but it was very little.

This tells me that it’s people with big money who are buying. But if the macroeconomic factors are currently not supportive for gold, why are they buying? It could be the overpriced stock market, a large part of which is driven by passive investing (e.g. ETFs) and computerized trading strategies (e.g. risk parity funds) is making them nervous. 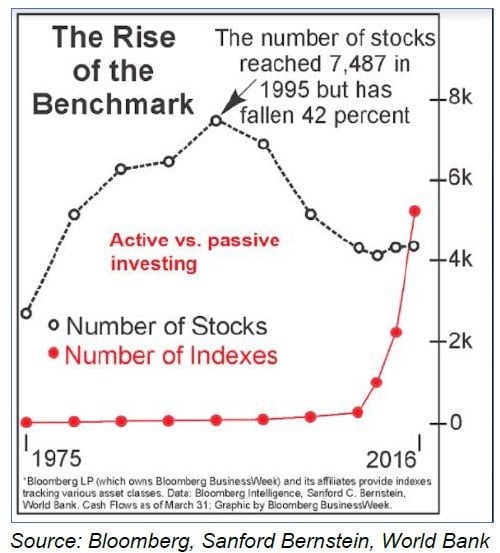 I think the economy is more dependent on the stock market than it used to be because, as John mentioned, the government is dependent on tax receipts from capital gains. US tax revenues were actually very low even before the new tax code came into effect.

Moody’s has a chart that looks at default expectations for high yield bonds, and it compares the relative level of corporate debt to different yardsticks, like GDP or cash flows, and it shows that corporate debt levels are extremely high. Usually we see defaults and default expectations going up as well in such times, but this time around they don’t; they are actually going down - at least for now. 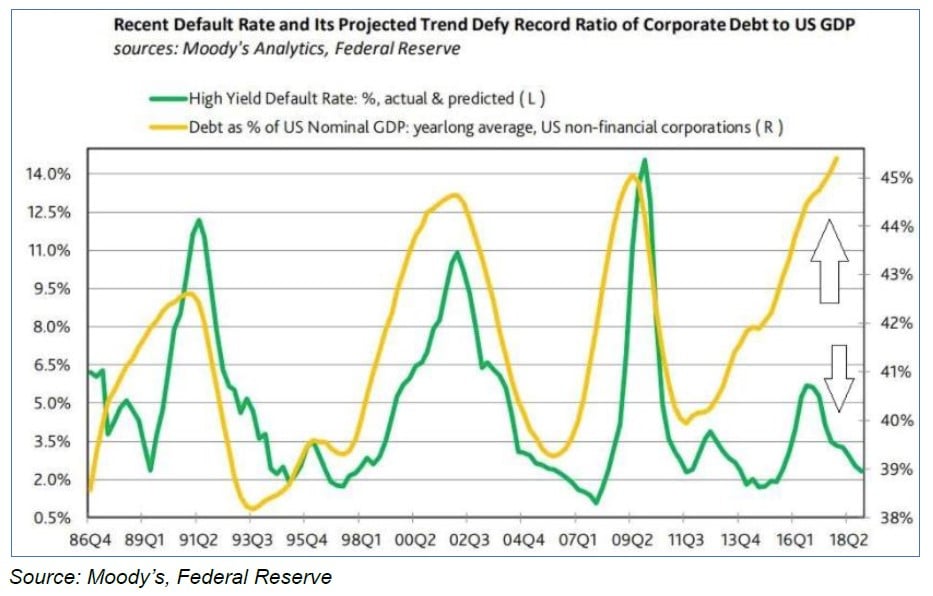 We know that the ECB is buying corporate bonds and suppressing credit spreads. Usually before a crash we see credit spreads widening, but it may not happen this time. I think things will look fine one day, but then terrible the next i.e., the trend change in credit spreads will be a non-linear event. And all it takes is probably a small catalyst. 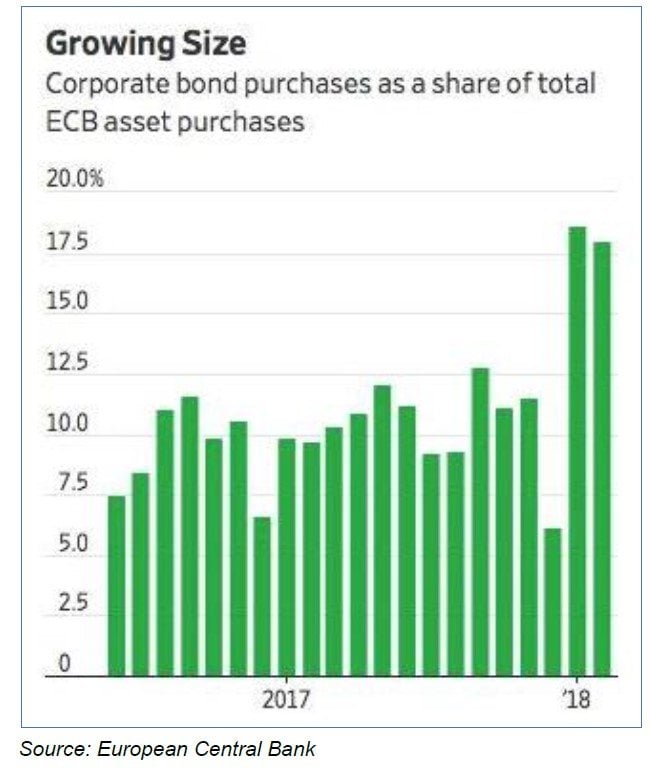