ValueWalk
Home Info-Graphs The Jump From Millionaire To Billionaire, And How Long That Takes 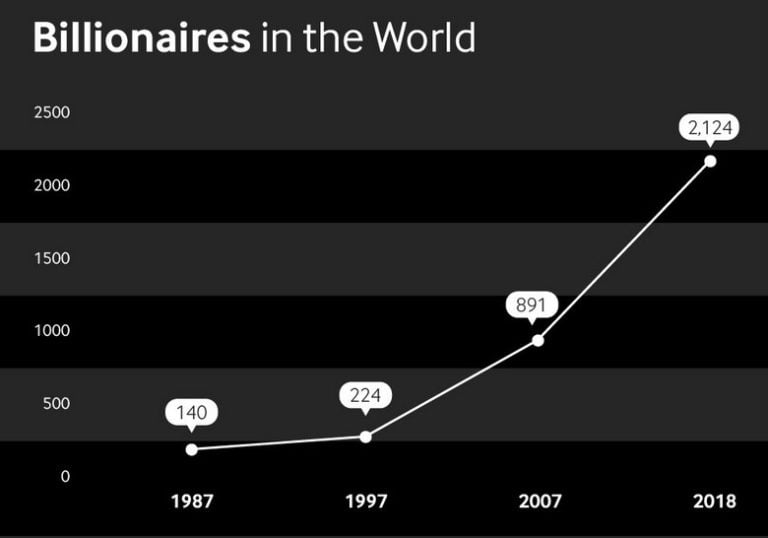 Some people say that making the first million is the hardest.

Others, like oil tycoon T. Boone Pickens have quipped that the first billion is a “helluva lot harder”.

Regardless of which is true, it’s interesting to examine how long it took the world’s wealthiest to reach the million and billion dollar benchmarks, as well as how many years were in between.

Today’s infographic comes to us from Betway, and it provides a study of the 100 wealthiest billionaires that topped the 2018 edition of the Forbes Rich List.

Based on the top 100 billionaires studied from the Rich List, the average age for hitting millionaire status is 37. Meanwhile, the billion dollar mark is hit on average at the age of 51.

This puts the average time period to go from millionaire to billionaire at 14 years.

Making the Jump, by Industry

Even with this small sample size, it’s clear that how fast this jump happens depends greatly on industry.

Tech entrepreneurs were by far the fastest on the list to go from millionaire to billionaire, with an average time of only 7.3 years. That number is averaged down by entrepreneurs such as Jeff Bezos, who has singlehandedly been able to amass an impressive empire of companies and assets in a very short period of time.

Other industries don’t have the same luxuries as tech, where products can go from Zero to One at such high speeds.

In the automotive, construction, and real estate industries, for example, there are costly physical assets to deal with, as well as fiercer competition. At the same time, innovations are often more incremental, and companies cannot be scaled as fast.

Making the Jump, by Country

Interestingly, the jump from millionaire to billionaire took the longest in the United States, with a period of 14.1 years on average for self-made billionaires.

While this may seem counter-intuitive, there are a couple of caveats worth mentioning.

For starters, the sample size is extremely small at just the top 100 billionaires, which means that a country like Russia has only so many in the mix. This low sample size can distort figures, and not be particularly representative of a true average.

Further, economies like Russia and China have recently transitioned from more controlled economies to more market-driven ones. This has allowed oligarchs and well-connected individuals to take advantage, while amassing new wealth at astonishing rates.