ValueWalk
Home Business A Former Tesla Inc. (TSLA) Bull Explains Why The Company Could Be... 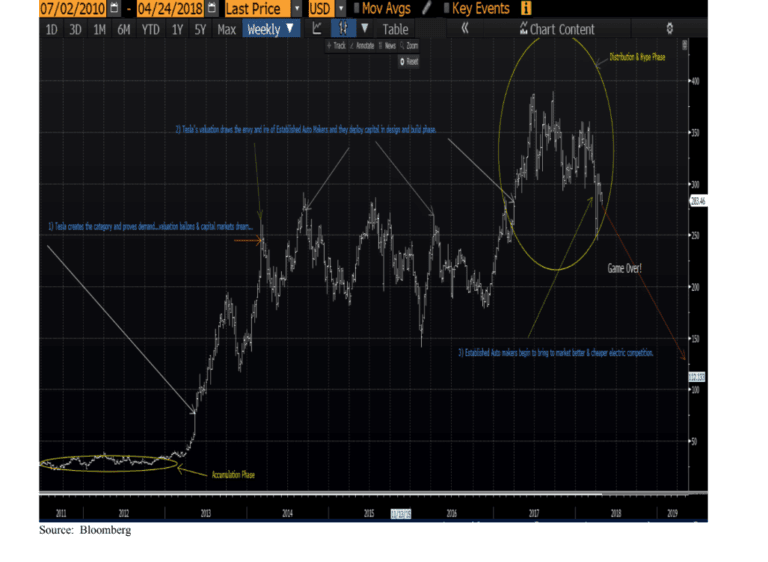 We have seen many arguments from Tesla bulls and bears over the years – but this is the first time we have seen a bull turned bear on the stock (to my knowledge). Additionally, the fund manager made a killing on the long side of this stock trade – that is why we think the thesis below is particularly interesting. A former BULL turned BEAR/SHORT Tesla Inc. (NASDAQ:TSLA)  explains why the company could go bankrupt see an excerpt from the fund manager by Edward Dowd Managing Partner, CIO Equities at OceanSquare Asset Management LLC

Lead Up to Final Chapter : The Big Dream

Tesla is a classic example of why the capital markets exist. Elon Musk is to be congratulated for taking the idea of the Electric Vehicle (EV) from concept to reality and pulling forward the other auto makers into the EV space way earlier than they would have otherwise. He started in the high – end marke t, designed the Model S Luxury Sedan and bough t his Freemont California manufacturing plant from Toyota for $42 million with capacity for 500k units in the depths of the financial crisis. He also received a $465 million loan from the department of energy to get thi n gs going as well. Many of his detractors then said that without his loans from the Obama administration and the EV subsidy he wouldn’t be able to stand on his own. While that statement was true it really didn’t matter.

If the US government under the Obama Administration w anted to make EV’s a reality and the Fed was making the cost of money free, why would you as a short seller fight this endeavor with Elon as the anointed one with a virtually free auto plant ? Well the answer was that many folks did, and the stock was a ba ttle ground from its IPO in 2010 until Q1 of 2013. While I was an equity growth PM at BlackRock , we accumulated a 2% position in TSLA during 2011 and 2012 in the $25 – $35 range. My thesis was very simple at the time as I thought Tesla was a call option o n the EV market. If Elon was right and could bring a car to consumers, we saw 300 – 400% upside and if he was wrong we would lose 50 – 60% of our 2% investment immediately .

My upside target was predicated on my knowledge of the history of the capital markets. If you create a company with a disruptive technology that can lay claim to a large market share land grab and you demonstrate an ability to execute then the valuation of your company will balloon and frankly valuation doesn’t matter. The risk between 20 11 and 2012 was that Elon would stumble and the Model S would never get out of the gate. Eventually he did deliver a very popular Model S in 2013 and many investors suddenly ‘discovered’ Tesla at much higher prices and began to drink the Kool – Aid and give Elon copious amounts of capital to help build his “Champa gne Wishes and Caviar D r e ams ” company. In hindsight I did not realize how absurd the valuation would become as many growth investors dreamed very big dreams

As an active former bull on Tesla one might find it curio u s that I would flip to a bear and initiate a short position on this stock . If my original thesis was that Tesla was a call option on the EV market and that Elon would create the space driving his v aluation up, then to keep me in the stock I would have to switch from dreams to reality to see if the valuation can be supported as competition nears. Unfortunately for Elon and those that have provided capital, the dream has morphed into a Freddy Krueger style nightmare. Below is the bullet point list of negatives that I see on the horizon and I will briefly address each one. There is a very good chance that a massive equity dilution or bankruptcy could occur over the next 6 – 12 months for this stock as a host of perfect storm events are occurring simultaneously . • Competition in both the high – end EV market and the EV mass – market is arriving this year from well healed competitors and Elon has not even secured any market share in the mass market (Model 3)

• Model 3 is plagued with production and quality control problems • Key executive departures are beyond alarmingly high especially in the finance department • Cash flow is negative, and the company needs to raise a substantial amount of capital with whispers of SEC violations and fast and loose accounting standards

Due to the unique collaboration of both equity and fixed income PMs we were able to see that a Tesla short was very timely due to its worsening liquidity position and our belief that risk assets are coming under pressure due to a global slowdown. The Tesl a saga is a classic American tale of capitalism and the capital markets at work. An entrepreneur attracts capital and trail blazes a whole industry. He can either dominate it or be marginalized by the competing capital attracted to his space that inevita bly reduces returns. In Elon’s case he squandered a first mover advantage by becoming distracted with other businesses and his hubris that being first was also being smart. Our guess is that this stock will be much lower over the next 12 months with the very real possibility of bankruptcy