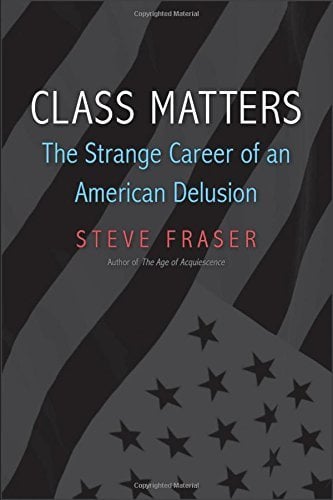 “Class matters in America precisely because the country has labored so hard to pretend it doesn’t.” This is the defining premise of Steve Fraser’s latest book, Class Matters: The Strange Career of an American Delusion (Yale University Press, 2018).

Class Matters: The Strange Career of an American Delusion by Steve Fraser

Fraser chose six icons of American history, none of which at first glance seems to have much to do with class, to frame his narrative: the settlements at Plymouth and Jamestown, the U.S. Constitution, the Statue of Liberty, the cowboy, the “Kitchen Debate” between Richard Nixon and Nikita Khrushchev, and the March on Washington and Martin Luther King’s “I Have a Dream” speech.

Here I’ll look briefly at the utopian view underlying the “Kitchen Debate.” At the American National Exhibition in Moscow in 1959, in the kitchen of a six-room suburban ranch house at the center of the exhibit that, it was claimed, “everyone in the United States could afford,” Vice President Nixon and Soviet Premier Khrushchev argued over “which society was likely to produce the best stoves, washing machines, televisions, electrical appliances, and other consumer delights.” The American Tomorrowland kitchen on display that year “promised to level the playing field between haves and have-nots.”

The notion of leveling was a common cultural theme at the time. One American magazine after the other touted the demise of social and economic classes. House Beautiful, for instance, wrote: “Our houses are all on one level, like our class structure.”

Admittedly, the post-war U.S. economy boomed, as did the country’s standard of living. A dominant view at the time was that “the modern corporation together with the welfare state worked to efface class. … Neither capitalist nor socialist, this new social species fused free-market liberalism with social democracy.”

But, even then, material well-being and social security were not universally available. “[A] whole phalanx of government housing programs, private-sector financing, local zoning protocols, and state and federal tax subsidies and shelters guaranteed that those options were really only practicable for families of more than modest means and of the right complexion. The suburban dream, like the American Dream more generally, turned out to be part real, part hallucination: class (and race) matter, no matter the efforts to make it go away.”