ValueWalk
Home Value Investing Starvine Capital Q1: How does a PE investment increase in value from...

Again, currency had an impact, although this time positive. I estimate the 2.5% appreciation of the U.S. dollar in Q1 aided performance by approximately 1.6% and 1.0% for Flagship and Mid-Large Cap, respectively.

Thus far, trading in the Starvine strategies has been close to nonexistent in 2018. In fact, not a single trade has been made in Flagship since the end of last year. This quiet period is unlikely to persist as certain positions will need to be rebalanced for risk management reasons. The vast majority of holdings met or exceeded earnings expectations last quarter, which was incongruent with the price declines of most names in the Starvine strategies. In my assessment, it was the advent of the trade tariff concerns in the media that drove the sudden declines at quarter end.

Next quarter’s newsletter, to be released in July, will be the last edition published on a quarterly basis. I have arrived at the realization that penning meaningful thoughts every three months is a little too frequent, especially given the long-term nature of my approach. I believe clients, who are welcome to call anytime to discuss their portfolio, will be better served if I use the time for reflection and research. Instead, I will write these letters semi-annually following the second and fourth quarter of each calendar year. Each client will continue to receive customized emails every quarter, along with the performance statements.

Well that was quite the noisy quarter! Within a few weeks of publishing the Q4 2017 letter, the S&P 500 experienced a 10% correction, followed by a rebound, and then another sell-off at the tail end of March, which was encouraged by fears of potential global trade wars.

No doubt, the markets are collectively anxious. My top-down view remains consistent with the Q4 2017 commentary. To recap, I stated that trading multiples are stretched, which leaves no room (at least justifiably) to benefit from multiples further expanding. On the contrary, overextended valuations may become a long term headwind if trading multiples contract as interest rates rise going forward.
How can one deal with the uncertainty of the big picture as an investor? Last quarter, I proposed a few basic questions to run through on each investment:

Notice how the questions focus on the specific company and not the state of the entire world; each company in a portfolio ultimately must be able to justify its own worth, and ultimately a higher value than reflected by the share price. If one lacks the know-how to confidently answer the above questions, a low-cost indexing approach or active management strategy should be given serious consideration.

Two quarters ago, I wrote about how the Law of Buoyancy is comparable to the force which causes the prices of undervalued assets to correct. Push an inflatable beach ball underwater, and it will travel back up to surface. The same goes for stocks. And what if a giant wave should submerge the ball far below surface? This would be akin to a recession pushing a stock price down 50%, even though the stock was already undervalued. The result would still be the same, albeit delayed. Just as the ball will float upwards to surface, the stock’s price should work its way back to fair value. The key takeaway here is to stay focused on what is knowable (e.g. management’s track record, free cash flows, and company fundamentals) rather than what is always unknowable (e.g. the exact timing of the next recession). Another thing to keep in mind is that each company/stock is a microcosm. Although part of the broader market, the long-term fate of each company is governed more by its own merits and free cash flow than what is transpiring in the macro picture. Hence it should follow that a stock can zig while the market zags and vice versa.

Question: How does a private equity investment increase in value from $855 million to more than $8.6 billion in less than three years?

First of all, what is a lollapalooza effect? Charlie Munger mentions this phenomenon several times in Poor Charlie’s Almanac. Simply put, a lollapalooza effect occurs when two or more forces operate in the same direction. The confluence of these forces often results in an outcome that is non-linear or more than a straight addition of the forces.

Graftech International manufactures and sells a product known as the graphite electrode, a mission-critical consumable required by electric arc furnace (EAF) steel producers. Brookfield took Graftech private in 2015, when Graftech’s earnings power had undergone four years of pressure from a steel industry in oversupply for four years. In fact, Graftech was loss making until sometime in 2017.

Brookfield recently filed for an IPO of Graftech’s equity in order to begin crystallizing its enormous win by selling a portion of its holding in the company. Brookfield already refinanced the company for incremental debt of ~$1.1 billion in early 2018, thereby distributing back 130% of its initial $855 million equity investment. Additionally, at the mid-point of the IPO pricing range, the equity is worth about $6.8 billion. With the $1.1 billion distribution from refinancing and a $750 million promissory note to Brookfield, that is $8.6 billion of value, or more than a ten-fold increase (i.e. “ten bagger”) in less than three years.

What was behind this wildly successful outcome? Within a span of two years, the price of graphite electrodes shot from a historic industry low of approximately $2,500 per MT (vs. a long-term average of ~$4,500 per MT) in 2016 to record levels between $15,000 and $30,000 per MT in the first quarter of 2018. Several factors aligned to make this happen.

Driven chiefly by the surge in graphite electrode pricing, EBITDA (earnings before interest, taxes, depreciation and amortization) for 2018 will likely exceed $1.1 billion – this from a loss-making position when Brookfield took control of Graftech in 2015. In other words, Brookfield’s purchase price of $1.25 billion ($855 million equity + ~$400 million debt) turned out to be a mere ~1.1x run-rate EBITDA in 2018. More useful in my opinion is free cash flow (FCF).  Based on details from recent filings, I estimate the $1.1 billion translates into roughly $650 million of FCF, which means Brookfield’s initial equity investment equates to 1.3x Graftech’s estimated cash flow for 2018!

Which specific forces lined up to create this success? Was it all luck? It is difficult to carve the lines between luck and skill here. What is clear is that Brookfield locked in a low purchase price for the company and thus received many free options. Several forces – some uncontrollable and some directly under Graftech’s control – acted in concert to drive Graftech’s earnings upwards.  In a nutshell, increased demand from unrelated sources coincided with reduced supply of graphite electrodes, while management made shrewd internal decisions to create value: 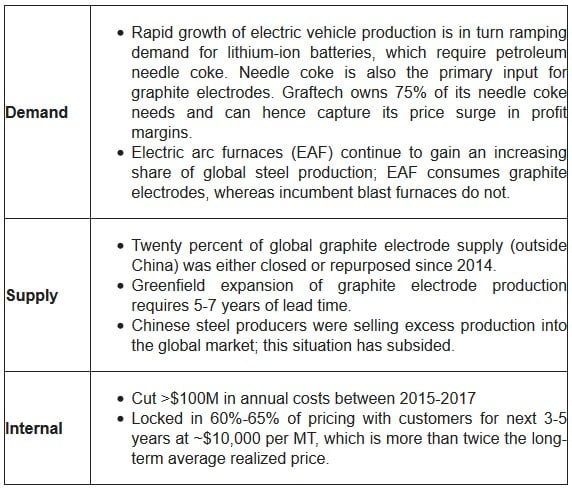 Demand for electric vehicles – totally unrelated to graphite electrodes – is driving demand for petroleum needle coke, which is required for both lithium-ion battery and graphite electrode production. The International Energy Agency (IEA) estimates that the global electric car stock doubled to two million vehicles in 2016 from 2015, and projects the number to grow to between 40 million and 70 million by 2025. This is causing a surge in needle coke prices (and hence graphite electrode prices), which in turn is providing Graftech with a cost advantage versus competitors since Graftech produces 75% of its needle coke requirements. Concurrently, the supply picture benefitted from a 20% closure or repurposing of graphite electrode production since 2014, the result of a years-long downturn in the steel industry. New production requires 5-7 years to come to fruition, given the environmental permits and other planning required. Brookfield was able to add “hands on” value since the inception of ownership by reducing annual costs by more than $100 million. Also, Brookfield mitigated the cyclicality of the investment by entering three to five year contracts to fix pricing with customers for 60-65% of production. Such contracts are new to the graphite electrode industry, though a signature practice in the Brookfield toolkit. Clearly, many forces, working in the same direction, are responsible for the lollapalooza result.

The Starvine strategies are invested in Brookfield Business Partners (“BBU”), a spin-off from Brookfield Asset Management that owns approximately 34% of Graftech before consideration of the amount to be sold in the IPO. Graftech is one of several private equity investments owned by BBU, and quite candidly was the segment I (incorrectly) saw the least promise in when I purchased the stock almost two years ago. The immense value creation from Graftech has yet to be, in my assessment, fully reflected in BBU’s share price. 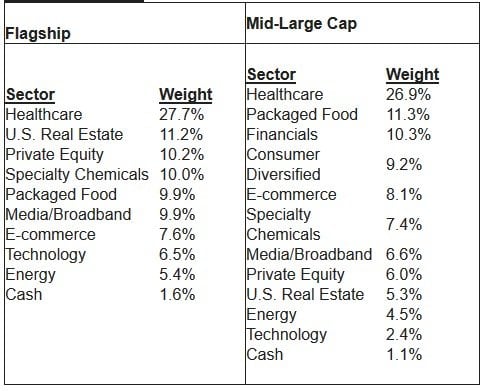 On average, I continue to see healthy growth in the earnings power of the portfolio companies. Meanwhile, the recent volatility in stock prices has served as a reminder that only over years can the randomness of the markets iron itself out.

Playing the game of long-term investing requires immense patience; those who are able to keep emotion out of the process will always have the odds in their favor. One of the things that intrigues me most about investing is that it cannot, in my opinion, be truly mastered. All human beings are subject to becoming over-confident, under-confident, and making mistakes of judgement. However, what we can control and strive to improve is our thought process.