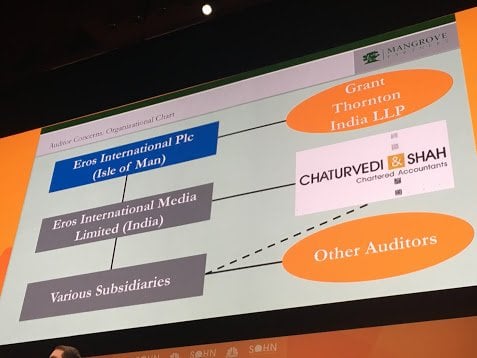 I got this fuking thorn in my side and it refers to Eros International, LLC (Eros).  A little bit of background – production and distribution in Bollywood films.  It also has an OTT platform, Eros Now – “Netflix of India”.  It reports under three segments – theatrical, TV syndication, digital & ancillary.

With sum of parts valuation, implied share price of $10.93, only 7% below current so why not like?  First Question, what are theatrical revenues? The company has shifted towards low budget films (3/4 produced on YTD basis) – cost less than $1MM in production costs.  Despite this shift, theatrical revenues are at an all-time record at $3.5MM per film.  And yet, the number of films have collapsed by 2/3s to only 21 on an LTM basis.  And this is a small enough # of films to go through 1 by 1 to get a view on how those films did.

I took the most aggressive estimates I can find on third party data.  Sarkar 3 is most important – distributor typically keeps 50% of box office, so $1.4MM to EROS and then so on to get to $3.4MM in distributor share of revenue estimate for Q1’18.  As compared to the $23.6MM that EROS reported.  That is an 86% discrepancy.  Things aren’t better for the second quarter – $9.3MM vs. $19MM as reported by the company (52% discrepancy).  And most recent quarter, distributors share estimate was 0.3MM compared to $12.9MM reported by the company (98% discrepancy).  Company reported average of $3.5MM per firm. Independent estimates about $800K per film.  Between 2009 – 2011, reported average theatrical revenue of $600K.  The company’s DS0s have increased 99 in FY08 from to 407 in most recent quarter.