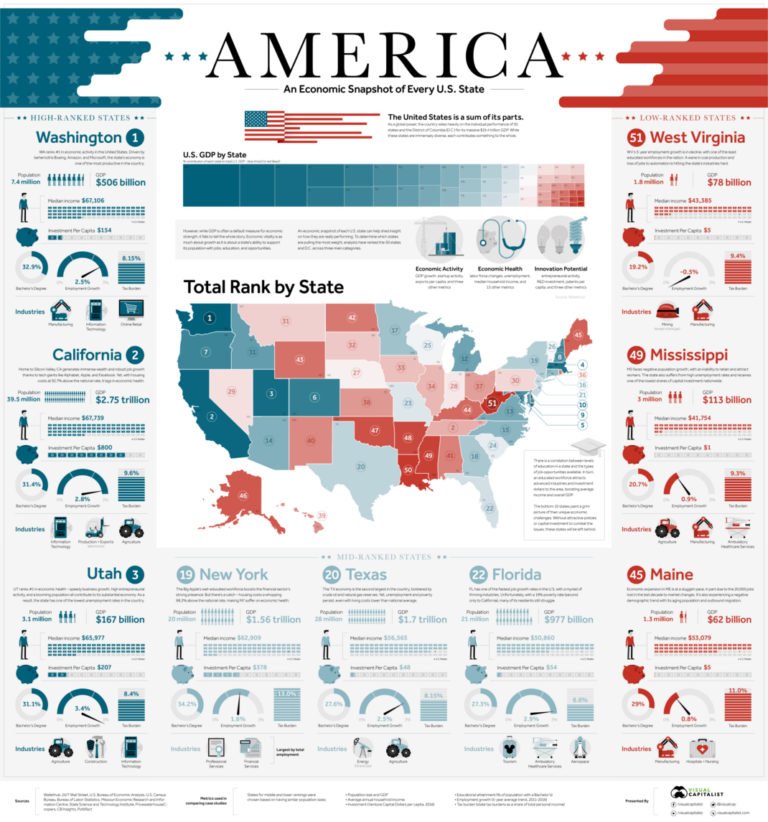 On a global scale, the U.S. economy is massive at close to $19 trillion in size.

However, the United States is also the sum of its parts. America represents the union of 50 states and other jurisdictions such as D.C., and all of these state-level economies have their own unique problems to overcome, drivers of growth, and local resources that factor into their prosperity.

How can we compare these state economies on an even playing field?

Using absolute numbers, it’s hard to directly compare California ($2.75 trillion GDP, 39.5 million people) to a state like Vermont ($33 billion, 0.6 million people). By leveling the playing field, we can get an idea of how states contrast in terms of relative economic strength that companies and workers would better recognize.

Today’s infographic uses 27 metrics from WalletHub to rank state economies. These metrics are grouped into three major categories, which are evenly weighted:

Note: the full methodology with all 27 factors can be found here.

Here’s how the rankings shake down, for all 50 state economies and D.C.:

Topping the list for overall score were the states of Washington, California, and Utah, and the first place state in each major category includes Washington (Economic Activity), Utah (Economic Health), and Massachusetts (Innovation Potential).

Looking at statistics and scoring methodologies alone can be a bit esoteric, so let’s look at some individual cases to see some contrast.

Utah consistently ranks as one of the top states for business, in the country, as well as a top state for job growth and employment. It’s also pretty unique in that it has a fairly diversified economy, with major sectors in the tourism, agriculture, tech, manufacturing, finance, energy, and mining industries.

Utah has a higher median household income ($65,977), and a blistering 3.4% employment growth rate.

Using this methodology, Florida falls somewhere in the middle of the rankings. The good news is the state has good employment growth (2.9%) and a myriad of thriving industries like aerospace. The bad news? Florida has the second-highest level of poverty in the union at 19%, and it also has a lower median household income ($50,860) than the national average.

Economic activity is sluggish in the country’s most northeastern state. With an aging population, slow employment growth (0.8%), and a number of lost manufacturing jobs over the last 15 years, the state is trying to rebound. Maine isn’t helped by having one of the highest tax burdens for its citizens and businesses in the country, either.