Facing headlines of a trade war with China and privacy issues, the Tech sector has gotten beat down, creating an opportunity to bargain shop. Now is the time to be aggressive and grab a great stock at depressed values.

The Tech sector peaked on March 12 based on the proxy Technology Select Sector SPDR ETF (XLK), and has dropped by nearly 7.5% since. Finbox.io's stock screener makes quick work of finding stocks ready to rise from the ashes.

Candidates were narrowed down initially by setting the filters to look for Information Technology stocks with at least a $1 billion market cap that have fallen 10%+ over the last month but had positive gains over the last year. This screen also looked for expectations of 15%+ upside using both the average price target based on at least five analysts and finbox.io's fair value model.

These filters returned five tech stocks that have recently tripped up, but have a positive trend and are undervalued from the perspective of qualitative and quantitative analysis. For a comparison of the results, valuations multiples were added along with beta and fair value Uncertainty. The view below sorts the stocks by their Enterprise Value-to-Free Cash Flow multiples.

To round out the picture, technicals were also included to ensure that the stocks have not fallen too much. A drop of more than 10% below the 50-day moving average indicates that support may have been broken. Another indicator of momentum is how close the stock is to its 52-week high, where a higher percentage shows better investor sentiment.

From this screen, Oracle Corporation (NYSE: ORCL) and YY Inc (NasdaqGS: YY) look the most interesting based on the momentum qualities noted above, plus low EV/FCF multiples and low Uncertainty, which is a tighter spread in the valuation models within the Finbox.io Fair Value composite.

Oracle and YY are very different companies. Oracle is an established brand with a diversity of product lines and global sales. YY Inc hosts a live streaming social media platform in China. With Sino-American relations in flux right now, Oracle appears the safer bet. Since this is a bet for a bounce in the short-term, the focus will be on sentiment and the technicals, but first, a quick overview of Oracle.

Head in the Clouds 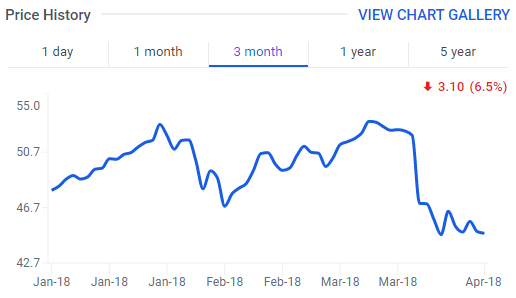 Oracle is a goliath. It has 430,000 customers across 175 countries. The company has made a major push to provide cloud services over onsite installtions, and claims to be the #1 cloud provider to more than a dozen industries. Oracle's Q3, which ended February 28, highlights that the firm is still in transition. Revenues still skew heavily towards onsite installations with a 66% share, but the future is in cloud computing, where sales grew by 32%. Management aims to convert existing customers to the cloud, and is set to be able to profit from them further as it convinces the remaining 85% to transition.

China accounts for less than 3% of Oracle's sales per last year's annual filing. Oracle is reliant on the U.S. for sales, where it generated 47% of 2017 revenue and 57% of last quarter's cloud sales. However, the company did see its best growth in EMEA (Europe, Middle East, Africa). Management had projected double digit EPS growth for FY2018, and confirmed in February that it is still on track after delivering 20% growth in Q3 and 18% YTD.

Despite management's confidence, Wall Street analysts are cautious after guidance for Q4 did not meet expectations. However, upset analysts tend to undershoot, which makes their expectations for appreciation of 21.6% conservative. Current EPS growth estimates are 12.4% for 2018 along with 5% sales growth. 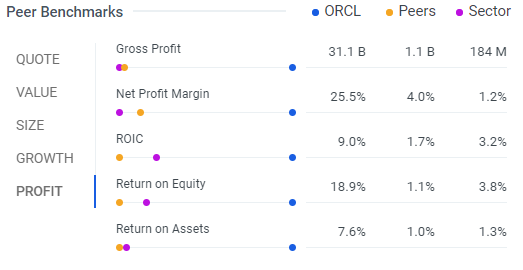 One concern with the balance sheet is the amount of leverage, and perhaps the need for it. Oracle carries $60.7 billion of debt, leading to a Debt/Equity ratio over 1x - much higher than its peers. 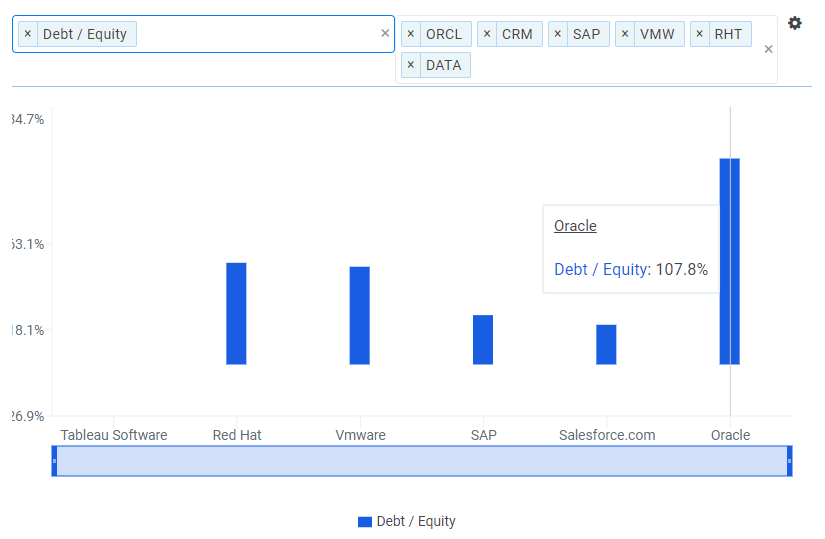 Its Interest Coverage ratio shows it can comfortably cover payments, but it is still the second worst across peers. 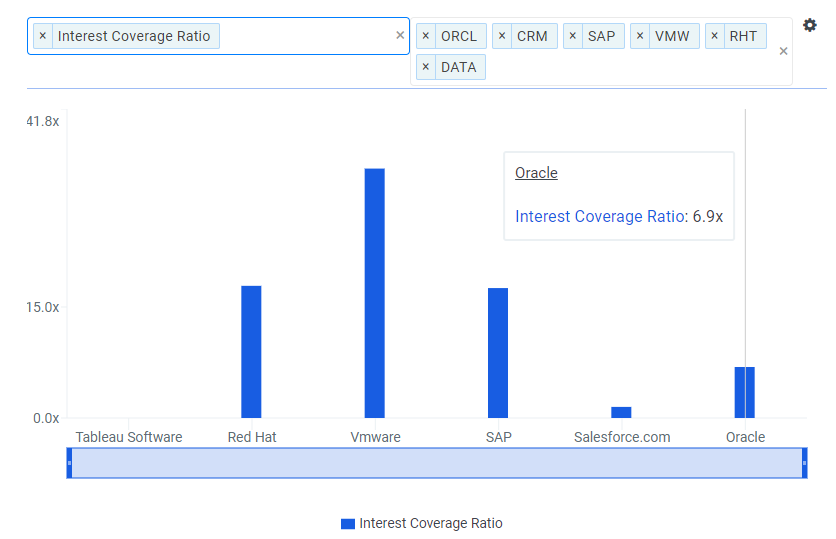 However, there is a reason for the debt that most likely has accumulated thanks to dividends and buybacks. As noted by Bloomberg last November, more than 87% of Oracle's cash was locked-up offshore. Prior to recent tax reform, repatriation rates were 35%, which have now fallen to 15.5%. It was much more advantageous for firms to issue debt, get a tax benefit on interest payments, and keep cash offshore.

Oracle's balance sheet shows that it has more cash than total debt. It's Cash ratio far outpaces its peers, indicating that it could pay off its liabilities nearly 5x over with its cash on hand. 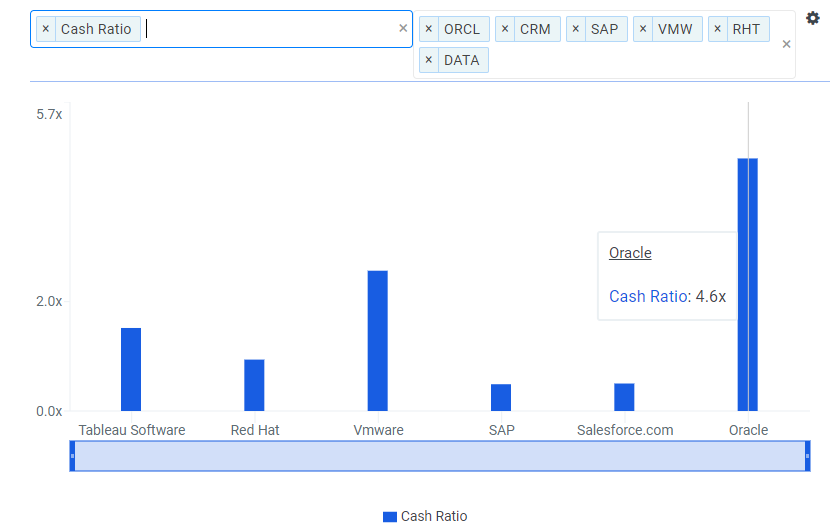 With no obvious red fiscal flags for the company, the next step is a look at valuation.

Oracle Valuations Show It Is Oversold 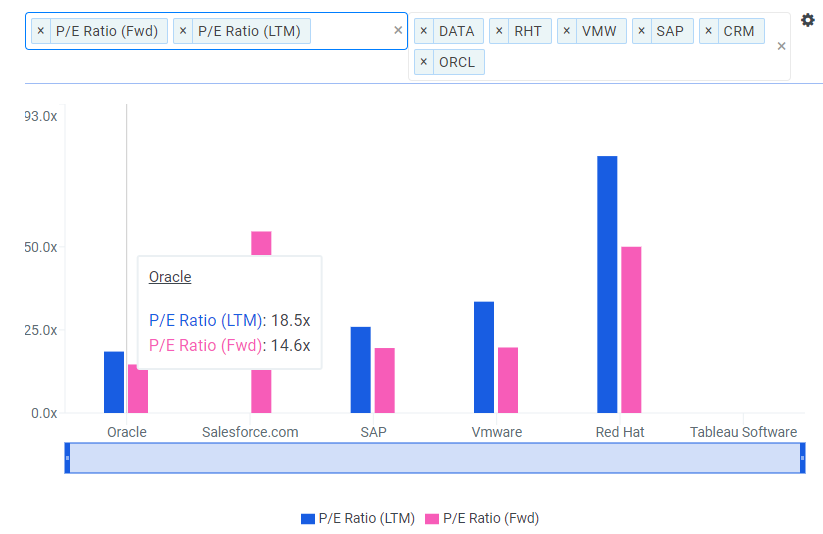 Sales, at the top of the income statement, is much less susceptible to engineering. Oracle's Price/Sales multiples, trailing and forward, are lower than all but one of its peers. 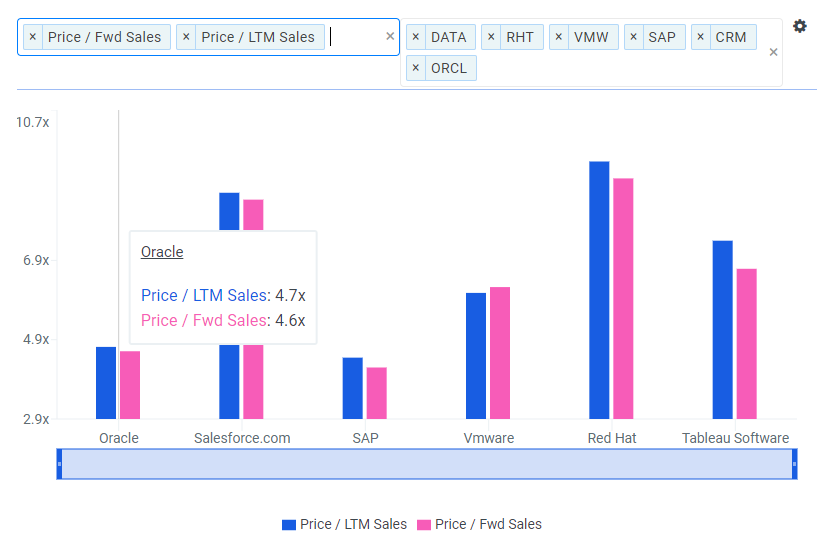 Perhaps the best multiple of them all is the Enterprise Value-to-Free Cash Flow ratio. EV is a proxy for the cost to acquire the company, and is more realistic than just using market cap as it accounts for items like debt and cash. Free Cash Flow is another non-engineered metric, which is the true amount of cash left over for investors after funding operations. Oracle's EV/FCF multiple is the lowest of its peers. 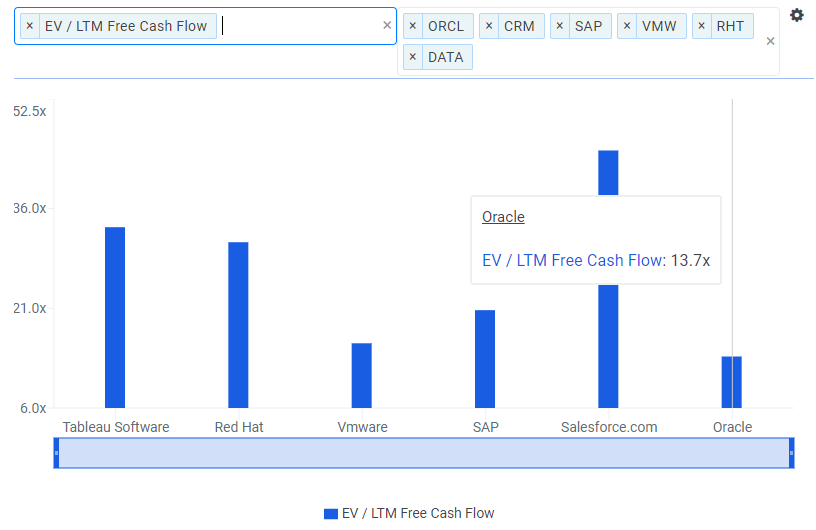 Relative to its peers, Oracle is undervalued. Confirmation is found via Wall Street and Finbox.io's all-quant Fair Value composite. Analysts are calling for the stock to gain 21.6%, while Finbox.io's valuation models see the stock jumping 19.5% to get reach fair value. 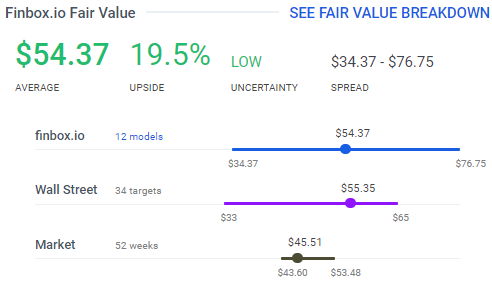 ORCL peaked just before Tech did, and has fallen below its 50- and 200-day moving averages. The stock has found support at $45, and its 200dma is still rising (red line). However, the 50dma (blue) is poised to break through the 200dma on any further weakness, which should serve as a stop loss.

Oracle is making progress in its transition to a cloud company, but still has plenty of room to grow with new customers and converting its 85% of clients that still use Oracle's software on their own servers. With EPS growth of 20% last quarter, and growth of 32% in cloud sales, the company is putting up good numbers. Even better in a trade war environment, is that sales are still heavily reliant on the U.S., and trouble with China is not a risk to revenues.

The stock is relatively undervalued based on the major price and enterprise value multiples. Tech sector volatility has left this quality firm in a position to bounce back with Wall Street and Finbox.io's quant model indicating an upside of 20%+.

The technicals indicate the stock has not broken down, and point to a stop-loss around $45. Betting on Oracle for a quick bounce is aggressive, but it is a quality company with solid financials that should not keep investors awake at night if they need to hold it a little longer than expected.