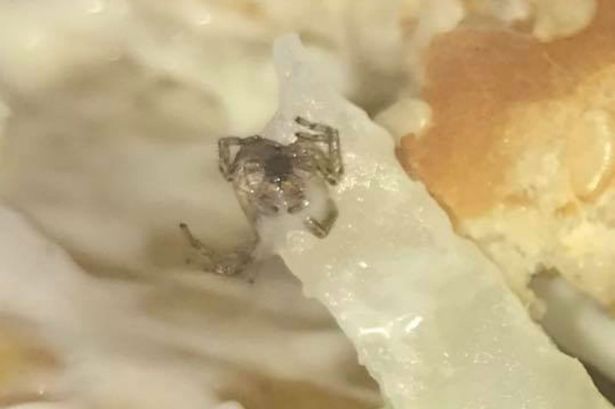 What’s the grossest thing you’ve seen at a McDonalds? For opera singer Ciara Harvie, the answer is a spider in her McDonalds sandwich. The 20 year old singer bit into her McChicken sandwich in Edinburgh, Scotland to find a dead spider resting in peace between two pieces of lettuce.

Harvie took the sandwich and accompanying spider to the manager of the McDonalds, but the manager did not even offer a refund. Instead, the manager offered her a new sandwich, which she declined to eat.

The outraged classical singer took to social media to share her frustration with the fast food chain after finding a spider in her McDonalds sandwich. Since then, her post has gone viral.

I didn’t realize it was a spider at first, I just thought it was a piece of brown lettuce or something. I looked closer and was shocked to see it was a dead spider. I understand that things like this happen, and probably not very often, but I think the way they handled it was the most disappointing thing.

After the post went viral, McDonalds issued an apology to the singer over finding a spider in her McDonalds sandwich:

We are sorry to hear about this customer’s experience. Food quality and safety are of the utmost importance to us and we place great emphasis on quality control, following rigorous standards in order to avoid any imperfections. At the time, we apologized to the customer and provided her with a replacement McChicken Sandwich. We have since spoken again with the customer to apologize once more and offer another replacement meal, which was declined.

Not many people would accept a replacement meal from an establishment that let a dead arachnid into her food in the first place!

Some might recognize Harvie from when she auditioned for The Voice. The audience and social media were furious at The Voice judges for all failing to choose Harvie. Not a single judge turned their chair around when she sang, claiming her “unique” voice would be too difficult to coach.

Employees have also reported selling chicken that had been sitting out for hours or beef patties that had fallen on the floor. Customers have claimed to have found even grosser things than Harvie’s spider in her McDonalds sandwich. One customer in Illinois reported finding a bandaid in her meal in 2005. Another girl allegedly found a long veterinary needle, probably the needle used to pacify the cow before slaughter. Pieces of dead rat, live bugs, nails, condoms, maggots, chewing gum, and worse have allegedly been found in McDonalds meals.

If you thought Harvie finding a spider in her McDonalds sandwich was gross, you should consider all of the hormones, chemicals, and antibiotics usually found in a McChicken. Some of the chemicals found in the ingredient list for a McChicken include: DATEM, Mono and Diglycerides, Calcium Propionate, Polysorbate 80, Calcium Disodium EDTA, Potassium Chloride, Sodium Phosphates, Ammonium Bicarbonate, Pyrophosphate, and more. This list doesn’t even include all of the hormones and antibiotics fed to the chicken before slaughter.

McDonalds employees aren’t just unhappy about low pay, they also claim unsafe work conditions. For years, McDonalds employees have been aledging unsafe work conditions, food safety violations, and a lack of proper training. Multiple employees have reported severe burns from oil. When the injuries were reported, they claim their managers did not assist them, instead they gave then some McDonalds mustard or mayonaise to put on the injury. The world’s largest restaurant company routinely faces dozens of lawsuits from dissatisfied employees and customers.

In the past few years, animal welfare advocates have also turned up the pressure on McDonalds, mostly over their treatment of chicken. The chicken used in McDonalds meals are pumped full of hormones to get them to a plump size and to the market as quickly as possible. Often, the chicken grow so large they are unable to support their own weight and are unable to walk. Even if they could walk, the chicken are kept is such cramped and filthy conditions they are unable to move freely. So far, eight animal welfare nonprofits, including the Humane Society, have taken a stance against McDonald’s treatment of animals this year.