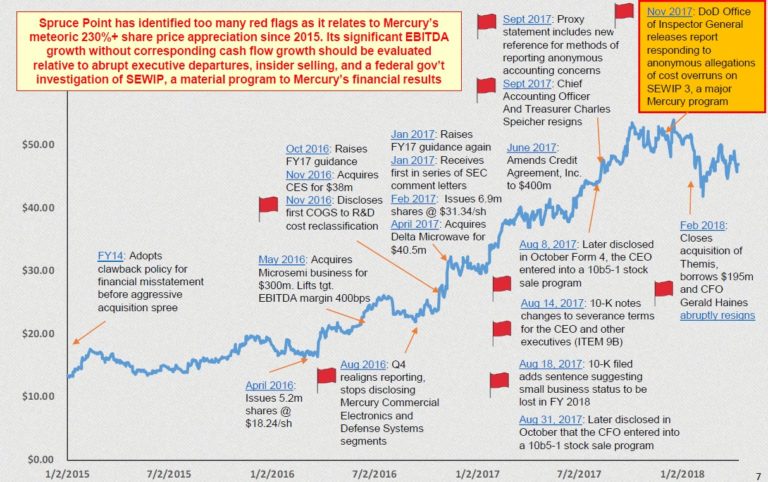 Spruce Point Capital Management is pleased to announce it has released the contents of a unique research report on Mercury Systems, Inc. (Nasdaq: MRCY) (“Mercury” or “the Company”).

Spruce Point has conducted a critical forensic and fundamental analysis of the Company. In our opinion, Mercury’s business is showing extreme financial strain, and has multiple material adverse effects converging on its business in 2018. Notably, we observe that while Mercury’s Adjusted EBITDA has grown 113% in the past three years, its free cash flow has been stagnant. This has coincided with a recently declassified government audit report by the Dept. of Defense Inspector General validating allegations and evidence of material cost overruns at SEWIP 3, a Navy program which has been a large growth driver of Mercury’s recent financial out-performance. Spruce Point finds recent public comments made by management on SEWIP conflict with SEC disclosures, which suggests a material loss to Mercury. Furthermore, both Mercury’s CFO and Chief Accounting Officer and Treasurer recently resigned, shortly before the initiation of an insider sales program, the disclosure of new company mechanism to report accounting concerns, and amendments to executive severance terms to define conditions of fraud and dishonesty.

Our report will detail why we believe Mercury’s recent acquisition of Themis Computers days before Christmas, appears motivated to replace slowing organic growth. By funding the deal with $190m on its line of credit (utilizing nearly 50% of borrowing capacity), Mercury is very likely to issue over 4 million of new shares to deleverage. Mercury’s growth by acquisition strategy also jeopardizes its status as a small business contractor, which will have Material Adverse Effect on its business in 2018, by making it ineligible for certain small business opportunities, and increasing its operating costs.

We believe none of these factors are being incorporated into Mercury’s current valuation, which is among the highest in the Aerospace and Defense industry at 4.7x, 19.3x and 31.5x sales, Adj. EBITDA and Adj. EPS, respectively.

As a result of our investigative analysis, we have issued a "Strong Sell" opinion, and a long-term price target of approximately $7.00 to $23.00 per share, or approximately 50% - 85% downside risk.

Mercury appears to be caught in the perfect storm of slowing growth, rising costs and debt. There are multiple material adverse changes currently facing Mercury which suggest 50% to 85% downside risk ($7 to $23 per share).

Mercury is currently borrowing on its credit facility to fund the acquisition of Themis Computer, which closed on February 1,2018. Consistent with prior deal funding practices, we expect the Company to issue equity, which would dilute investors with 4 million new shares. Our report will illustrate that Mercury’s valuation is the highest in the Aerospace & Defense industryonthe belief that its industry leading Adjusted EBITDA margins are fairly stated, and its organic growth can continue at high single, low double digits per management’s comments. Our critical forensic analysis will suggest otherwise. We think investors should focus on its free cash flow, which is trending down, while its leverage is rising meaningfully. 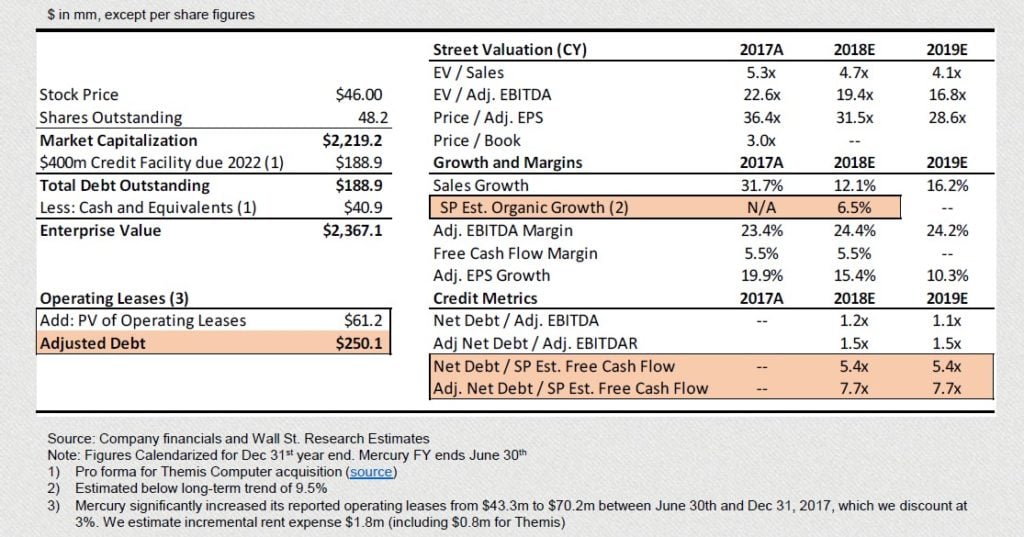 Mercury’s Now $190m In Debt And Beholden To Its Creditors

Mercury amended its credit facility in June 2017 to increase its revolver to $400m, and made certain reps and warranties that its financial statements were accurate, and post closing, there were no material adverse effects. Our research questions the accuracy of Mercury’s financials, and provides evidence that indicates Mercury is experiencing material adverse changes related to SEWIP, its largest revenue program, and the upcoming loss of its Small Business status. Since signing this agreement both Mercury’s CFO, Chief Accounting Officer and Treasurer resigned.

Three key members of Mercury came from Enterasys Networks (formerly Cabletron), where they were credited with turning around the troubled company and selling it to Gores in 2006 (source). Many Enterasys executives went to jail and others settled with the SEC. Mercury’s recently resigned CFO, Gerald Haines, worked at Enterasys prior to the scandal unfolding as its Chief Legal Officer and Secretary, which he omits from his biography. It is unusual that Mercury management recently decided to move offices back into the site of Enterasys (source) 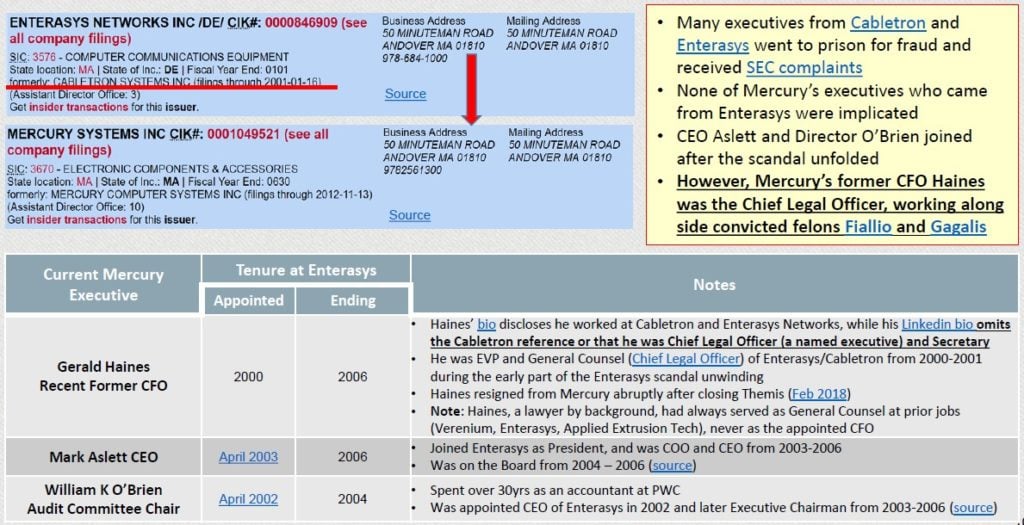