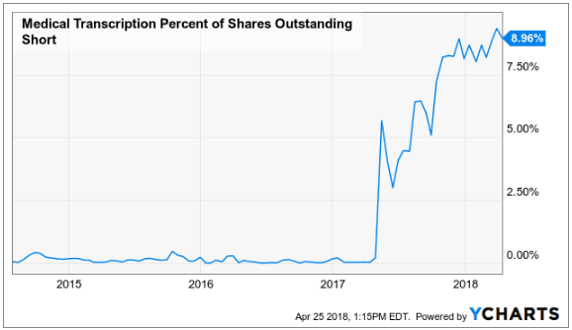 With a 10.8% dividend yield (paid monthly), growing revenues, shrinking debt, and a very large total addressable market, the preferred shares of this healthcare IT company are worth considering if you are an income-focused investor. We’ve ranked them #10 on our recent list of Top 10 Big Yields with Lower Risk. And after providing an overview of the company, this article reviews the negative risks, which are greatly outnumbered by the positive characteristics, before finally drawing some conclusions on how you may want to “play” this very high-yield opportunity.

Before getting into all of the positive attributes of this company (and there are many), we first review some of the obvious risks. Mainly, this is a very small “microcap” stock, and net income has been negative (although it is improving).1. MTBC is a Microcap stock with a market cap of only $40.1 million (extremely small). The common stock trades at only $3.35 per share, and the preferred shares (which happened to yield 10.8%, paid monthly) are recently trading at $25.39 (which is just above the $25 price at which management can redeem them starting in November of 2020). Microcap stocks (such as MTBC) are prone to heightened volatility, less analyst scrutiny, and are generally perceived to be higher risk.

2. Short Interest: Another risk to consider is there are a significant amount of MTBC shares currently sold short (i.e. investors betting against the stock). According to the YCharts, as much as 9.0% of the total float was recently sold short.

3. Negative Net Income is the other big obvious risk for MTBC. The company has not been turning a profit, but the bottom line has been getting better (and EBITDArecently turned significantly positive—a very good thing which we will cover more, later). For perspective, here is a look at the company’s historical net income and earnings per share. To some investors, this type of consistent negative net income is a deal breaker. Some investors simply won’t consider investing in a company that doesn’t turn a profit. However, despite the negative earnings, MTBC has consistently supported the big dividend payments on its preferred shares (if you’re an income investor, this is critical), and the company has also recently taken actions (paid down debt, made a big accretive acquisition) that are positioning it for better future earnings soon. Specifically, let’s take a look at the positive attributes of MTBC…

Now for the positives, and there are a lot of them…

1. Revenue Growth: MTCB has been growing its revenues, as shown in the following chart. From an acquisition standpoint, MTBC has a history of acquiring other small companies, but rather recently (late 2016) completed its largest acquisition ever by acquiring MediGain, and the company has been working to integrate, drive down costs (economies of scale), and maintain and grow revenues.

Important to mention, acquisition activities tend to have a temporary negative impact on EBITDA for 1 to 2 quarters following the acquisition, and as the following graphic shows, MTBC’s EBITDA recently turned sharply positive in the last three quarter (following the MediGain acquisition) and this is a very good thing.

In fact, this positive news is a large part of the reason the share price of MTBC’s common shares have recently climbed, as shown in the following chart. From an organic growth standpoint, the company has been focusing on ramping up its sales efforts. According to President and Director, Stephen Snyder, during a recent quarterly conference call:

“With regard to business development, while we have spent less than 4% of our revenue in sales and marketing so far this year, we're generating more than $3 of annualized revenue for every $1 spent. Our strategy of building lead generating relationships with other industry stakeholders and increasing our visibility at industry trade events has enabled us to sign much larger groups and achieve a record year of new sales bookings. In view of the strong return on our investment, we intend to further increase our sales and marketing activities during the year ahead.”

Also, management expects robust long-term growth led by talkEHR, a voice-activated SaaS electronic health record system. For example, the common shares were up significantly this last fall (as shown in our earlier price chart) as the company announced the successful launch of its next-generation, voice-enabled electronic records solution, talkEHR. MTBC has been offering talkEHR free of charge to all U.S. healthcare providers who can upgrade to the full-service package, including end-to-end medical billing, for 2.95% of a physician's collections. This is an opportunity for significant growth for MTBC.

2. Debt Reduction is another big positive for MTBC, as shown in the following chart. Specifically, MTBC has been issuing preferred shares to pay down debt, and this ultimately strengthens the company’s balance sheet and positions it for stronger future performance. Per the company’s recent earnings release:

“The Company raised net proceeds of $16.5 million from the sale of approximately 765,000 additional shares of its non-convertible Series A Preferred Stock via six small public offerings during 2017.”

“The Company used a portion of the net proceeds of these offerings to repay in full its term loans and line of credit with Opus, which totaled approximately $9.3 million as of December 31, 2016. In addition, the Company paid Prudential approximately $5.3 million, which covered the remainder of the purchase price related to the MediGain transaction, plus interest.”

Also important, according to Bill Korn, the company’s CFO:

“We now have a solid financial foundation, which leaves the Company well-positioned for growth. We have more capital available now than at any time in the Company’s history, and see exciting opportunities to profit from the continued consolidation of the industry.”

3. A Large Total Addressable Market is another attractive quality of this investment opportunity. Specifically, the North American EHR/RCM industry (as described previously) is a $20 billion opportunity, and 70% of that space is in MTBC target market (1 to 10 physician size practices). MTBC targets smaller practices while AthenaHealth (ATHN) goes after to larger customers. However the overall market is fragmented considering AthenaHealth has only a 5% market share. Importantly, the space has seen (and will likely continue to experience) frequent business combination/acquisition opportunities (such as those MTBC has completed). If MTBC were to get acquired by a larger organization (which is more likely now that debt has been paid down) the common shares would likely rise significantly (i.e. they’d get acquired at a premium). Also important, upon the occurrence of a change of control, the company will have the option within 120 days to redeem the preferred shares at $25 per share plus accrued and unpaid dividends. Another encouraging sign of the large total addressable market is that MTBC is hiring. A quick glimpse of the company’s website reveals a variety of open opportunities. It’s often a sign of health when a business is hiring, such as MTBC.

“In 2018, we have three paths for continued growth, including organic growth, partnership opportunities, and the potential for an accretive acquisition which might be material. We are pursuing all three of these in parallel. Unlike past years, today we can point to our recent results rather than simply expectations for the future. We anticipate spending more on sales and marketing in 2018 than the 3.5% of revenue we spent in 2017, but we are confident that we will be able to report significant growth in our adjusted EBITDA in 2018. “

4. Attractive Preferred Shares: The details of MTBC’s preferred shares (MTBCP) are also important to understand. Not only do they offer an attractive 10.8% dividend yield, paid monthly, but according to QuantumOnline:

“Medical Transcription Billing Corp., 11.00% Series A Cumulative Redeemable Perpetual Preferred Stock, liquidation preference $25 per share, redeemable at the issuer's option on or after 11/4/2020 at $25 per share plus accrued and unpaid dividends, and with no stated maturity. Cumulative distributions of 11.00% per annum ($2.75 per annum or $0.22917 per month) will be paid monthly on the 15th day of each month to holders of record on the record date that will be the last day of the calendar month (NOTE: the ex-dividend date is at least 2 business days prior to the record date)… Dividends paid by this preferred security are eligible for the preferential income tax rate of 15% to a maximum of 20% depending on the holder's tax bracket (and under IRS specified holding restrictions)… In regard to the payment of dividends and upon liquidation, the preferred shares rank junior to the company's senior debt, equally with other preferreds of the company, and senior to the common shares of the company.” Importantly, the shares trade close to the $25 par value (which is much better than if they traded at a large premium), and they’ve traded in that general range fairly consistently.

Make no mistake, there are very real risks associated with investing in Medical Transcriptions Billing, such as those described in this article. Specifically, it’s a microcap stock with negative net income. However, in addition to paying down its debt, MTBC has a variety of additional attractive qualities such as attractive revenue growth, a large total addressable market, and a business that is starting to turn the corner toward profitability and more growth. The common shares are highly volatile, but could easily increase dramatically if the company achieves profitability and continues on its positive trajectory. The preferred shares involve less risk and offer an attractive 10.8% yield, paid monthly. If you are an income-focused investor, MTBC preferred shares may be worth considering for the higher risk allocation in your prudently diversified investment portfolio. For these reasons, we've ranked MTBCP #10 on our list of Top 10 Big Yields.