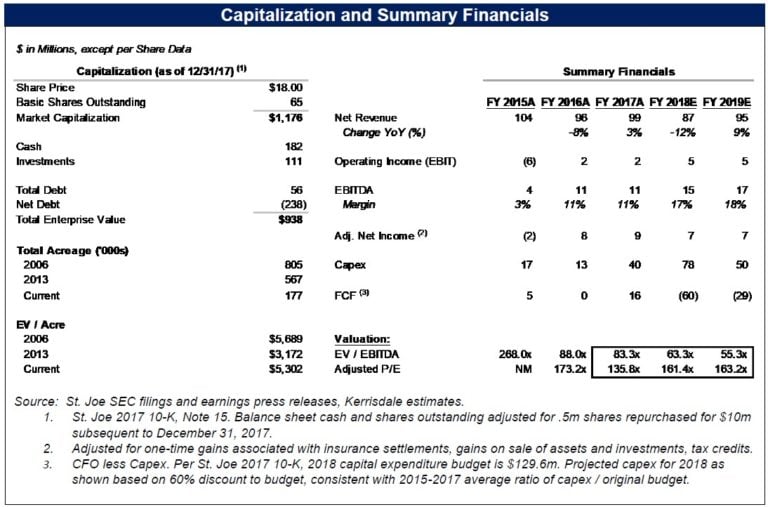 Kerrisdale shorting St. Joe (NYSE:JOE) an old Einhorn trade and one of Bruce Berkowitz’s long although they sorta gave it away early

“Tomorrow we will issue a new report explaining our short position in a real estate company whose assets are worth much less than what the current share price implies. And its largest holder should soon become a forced seller. ” $CTO? $SHLD? $JOE? https://t.co/JAnEUvETIO

See their thesis below

We are short shares of St. Joe Co, a Florida Panhandle developer with overhyped real estate holdings and a controlling shareholder who will soon be forced to liquidate part of his investment. For more than a decade, St. Joe has lured investors with the promise of unlocking value in large tracts of undeveloped land near Panama City Beach. Every year, however, this promise has remained unfulfilled, because St. Joe’s purported plan for the land is pure fantasy. Once owners of 1 million acres of undeveloped Florida real estate, St. Joe has sold off most of its valuable property. The 177k acres that remain are not adjacent to the Gulf of Mexico; rather, they are mainly inland in swampy, remote, desolate areas occupied by industrial pine.

St. Joe’s cash flow from current operations is minimal – the interest earned from its portfolio of junk bonds exceeds the income from actual real estate development. The bull thesis for St. Joe rests on the company’s ability to transform remote land, which no one can feasibly develop over an investment lifetime, into a world-class destination for retirees and businesses. There has been little progress on this plan for over 15 years. Management preaches patience and urges investors to maintain a long-term view; however, the reality is that the holdings are too unattractive to develop in the timely manner needed to justify any valuation close to current trading levels.

Drawing on extensive conversations with securities lawyers and experts, we believe a negative catalyst will ironically come from St. Joe’s largest shareholder, the Fairholme Fund. Much like St. Joe’s land holdings, Fairholme is a tiny vestige of its former self. Years of poor stock selection and high redemptions have taken a fund that once held over $16bn in net assets to just $1.6bn. It has also created an unsustainable dynamic: as net assets have receded, the fund has sold its most liquid securities to raise cash, leaving its massive position in St. Joe far in excess of SEC guidelines for illiquid holdings.

The Fairholme Fund is an open-end fund that offers daily liquidity and must meet redemptions within 3 days. Two months ago, the SEC instituted rules that limit such funds from holding more than 15% of net assets in illiquid securities. We estimate that The Fairholme Fund, holders of 22.7m shares, 70x average daily trading volume, has over 27% of its net assets in St. Joe. This gross violation of the new SEC liquidity rules has negative implications for St. Joe shareholders. Fairholme must reduce its stake by 10m shares to comply with rules that go into effect on December 1st. Given insider trading and volume restrictions, there are not enough trading days between now and December 1st for Fairholme to reduce its position in an orderly manner. Fairholme’s impending demise, and the need to comply with the new SEC regulations, subjects St. Joe shareholders to the painful overhang of a forced seller.

St. Joe is valued as if a new metropolis will soon emerge from rural forest and swamp. As liquidity risks mount for its largest shareholder, investors will see values sink back into mud. We value shares at $10.50 representing downside of -42%.

The Relationship Between Fairholme and St. Joe is Riddled with Conflicts of Interest

JOE is Not Cheap on an EV / Acre Basis; Population Growth in and of Itself Does Not Constitute an Investment Thesis

The Pace of Development of Will Continue to Disappoint

St. Joe shares are valued as if the company is destined for incredible growth. Yet the company’s present operations generate virtually no income and its remaining land holdings are not well-situated. This disconnect is obvious to anyone who has spent a few minutes analyzing the cash flow potential of the Bay-Walton Sector Plan or taken a drive down State Road 79. At only $2m of operating income in 2017, St. Joe’s earnings from real estate development are insignificant relative to the company’s $1bn valuation. Shareholders have predicated their investment on a rising level of recurring income from activities such as commercial leasing and the economic potential of vast, undeveloped timberland. While promoting a reasonable sounding thesis of patience and long-term potential, bullish investors have failed to recognize that being decades early in an investment is the same as being wrong.

The plan to transform St. Joe’s land in Bay and Walton counties into a thriving destination for retirees and businesses is known as the Bay-Walton Sector Plan (“the Plan”).13 The Plan is named after the two counties in northwest Florida where the St. Joe land is located. While shareholders are quick to describe access to the white sand of the Gulf of Mexico, they omit the fact that the land is not actually on the Gulf of Mexico – it sits on the far side of two highways, one of which is a major 4-line interstate (Route 98). Turn off Route 98 and drive up State Roads 79 and 388 into the interior of the Plan, where most of the land is situated, and its remote emptiness becomes apparent. 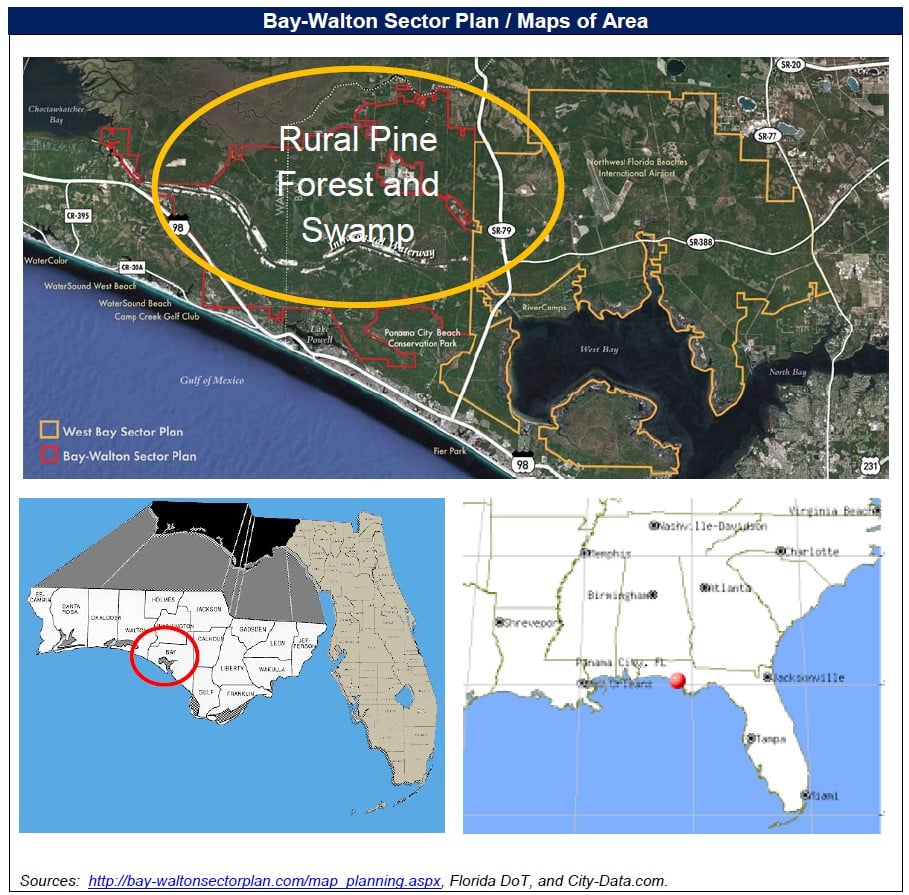 As a local realtor described, “it gets desolate, quick.” There are no local businesses. There is barely even a shoulder on the highway. Drive mile after barren mile and one realizes just how distant and unlikely a vision for the area the Bay-Walton Sector Plan represents.

Under the Plan, St. Joe is entitled to develop over 170,000 homes and 22 million square feet of commercial space on 110,500 acres of land.14 To provide perspective on the size of this plan (and how easily investors can be fooled into its potential) – 170,000 homes is 1.7x the number of housing units that currently exist in all of Bay County, Florida.15 110,500 acres is nearly 8x the size of Manhattan. The theoretical peak population envisioned by the plan is 350,643 (7x the current combined population of Panama City Beach and Panama City).16 Entitlements are a procedural formality – they have little bearing on what will ever actually be built and who will live there.

One major red flag for investors is how long St. Joe has discussed developing this land without any real progress. The Bay-Walton Sector Plan originally began as the West Bay Sector Plan, a project encompassing 75,000 acres immediately surrounding West Bay, and was approved 15 years ago.17 The Bay-Walton Sector Plan added over 40k acres to the west of the West Bay Sector Plan and received final approval from state and local agencies in June 2015.18 Despite promises to break ground on an initial community by the end of 201619, to date there has been zero progress.

St. Joe’s 2018 capital budget calls for an increase in residential real estate development but our checks have confirmed this will not be spent on the Bay-Walton Sector Plan. The next step called for by the plan is the buildout of a sub-division, known as a Detailed Specific Area Plan (DSAP). At present, none of the activity that would signal serious advancement of a DSAP is taking place. According to a local developer, “it is a straight, dead, flatline” in terms of building department inquiries, permit filings, and public hearings. Nothing new has been filed with relevant local authorities and there is nothing pending. In short, there is no reason to think the Plan is any more feasible now than it was when it was first proposed over a decade ago.

The increase in St. Joe’s capital budget is going toward developments such as Watersound Origins and Breakfast Point. We visited both neighborhoods last month and observed sizable new land clearings. At Watersound Origins, dump trucks were seen bringing dirt to the site suggesting more expensive elevation work was being done as part of development of the rough land. Watersound Origins felt like an empty-shell of a community. Despite the pleasant, sunny day there was no one on the golf course, virtually no one on the streets, and no one at the pool.

Long-suffering investors who have waited years for progress should be prepared to wait longer – St. Joe continues to struggle in its attempt to monetize its land at a pace that can remotely justify its current valuation. We asked local developers why St. Joe is progressing at such a slow clip. The response was that while local market conditions are improving, growth remains modest. In their view, the company continues to delay breaking ground because it is struggling to convince partners to buy into the economic feasibility of such remote land. Who can blame them? The terrain and risks inherent in developing are downright intimidating. As former CEO Peter Rummell once described, “A big, thick pine forest with a lot of undergrowth is a pretty forbidding place. It scares a lot of people.”20