It’s been a great week for the semiconductor sector. Driven by impressive earnings reports from key members, the PHLX Semiconductor Index (SOX) has gained nearly 4% in the past three days.

However, despite the strong showing so far this earnings season, I couldn’t shake this nagging feeling that market sentiment isn’t going to follow fundamentals higher.

It may be that smartphone sales growth is seriously lagging year-over-year, negatively impacting a key market for chipmakers like Micron Technology Inc. (Nasdaq: MU).

It may be that industry leaders like AMD and Nvidia Corp. (Nasdaq: NVDA) are growing increasingly dependent on a volatile cryptocurrency market. Or it may be that the U.S. political climate is just as unstable, and that the fate of the market often hangs on the whims of a single tweet.

And what I found was a bit surprising.

A Reversal in the Making

The bull market has been kind to the semiconductor sector. With a few exceptions, the group has blown away the broader market, with the SOX up a staggering 645% since the 2008 financial crisis. But that rally is getting long in the tooth, and semiconductor stocks are beginning to show signs of fatigue.

After peaking in mid-March, the SOX has entered a decline that is close to putting the index in bear market territory.

The index breached its 200-day moving average for the first time since May 2016. While support is holding for now, the SOX is in the process of forming a downtrending channel (as you can see from the chart below). 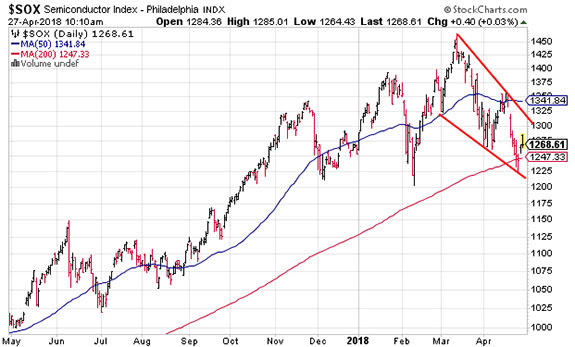 This series of lower lows and lower highs is disconcerting to say the least for semiconductor bulls.

It indicates that a key test of investor sentiment is just around the corner when the SOX tests resistance near 1,300. A reversal back toward this trend channel’s lows could have serious bearish implications.

Within the sector, we see similar occurrences with both AMD and Micron. Both stocks are forming downtrending channels, and both stocks are on the verge of testing the upper rails of these trends. 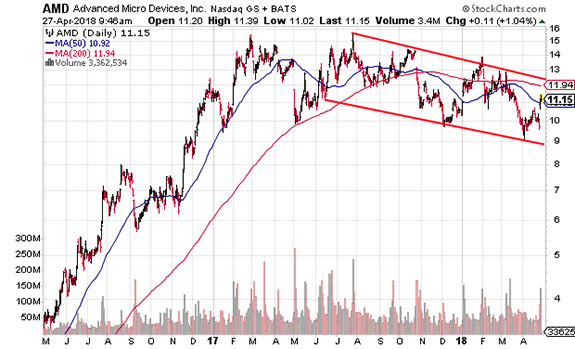 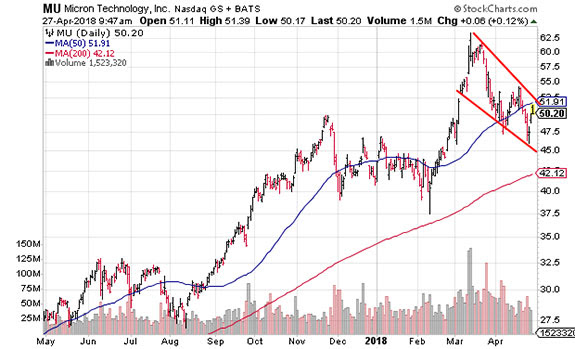 For AMD, this is a particularly crucial test of investor sentiment, as the stock is coming off a rather impressive first-quarter earnings report. If AMD fails to overtake $12 in the wake of this report, it means that investor sentiment has deteriorated considerably, and the shares could be trading in the single digits in short order.

As for Micron, we have already seen how a stellar earnings report often isn’t enough to overcome investor fatigue. The shares are set for their own critical test near $51. Once again, a rejection here would mean a continuation of the current downtrend. Apparently even an industry-low price-to-earnings ratio of 7.83 isn’t enough to entice buyers in the current market.

The surprising outcome of this technical look at the semiconductor sector is that Intel emerged as an outlier to the trend.

INTC stock has not entered the same downtrending channel pattern as the rest of its peers. In fact, Intel has held up so well, the stock came nowhere near testing its 200-day moving average, instead sticking close to its 50-day trend line and rallying higher. 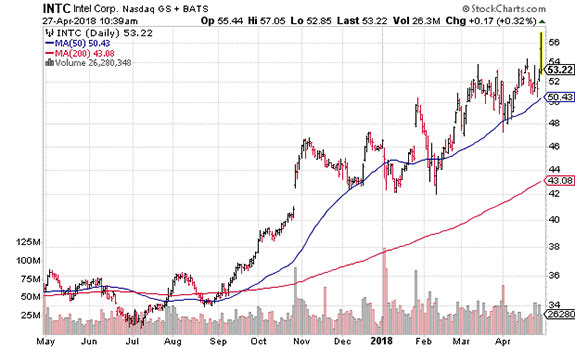 I find the strong market price support for Intel stock surprising for one reason: The tech sector is all about the next big thing. And, arguably, the next big thing in chips right now is AMD, with its EPYC and Ryzen chips threatening to take market share away from Intel. But, according to the charts, investors don’t see it that way.

It speaks to the current state of the overall market. Intel has a history of market dominance. Its chips are everywhere, and its name is synonymous with processing performance in both business and personal computing.

While AMD’s growth potential is enticing, Intel is stable. It’s a known factor.

The same goes for Micron and Nvidia. Micron is plagued by dependence on a fickle smartphone market and NAND and DRAM pricing. Nvidia, while a great company with many prospects in artificial intelligence and data centers, is currently suffering the same cryptocurrency fate as AMD.

Judging from their collective price action, investors are siding with Intel. And I can’t blame them.

That’s not to say that MU, AMD or NVDA aren’t good longer-term investments. They all have potential. They all will also have better entry prices in the next month or so.

Meanwhile, Intel is a buy right now, or on a pullback to $50 on any broad market anomalies.