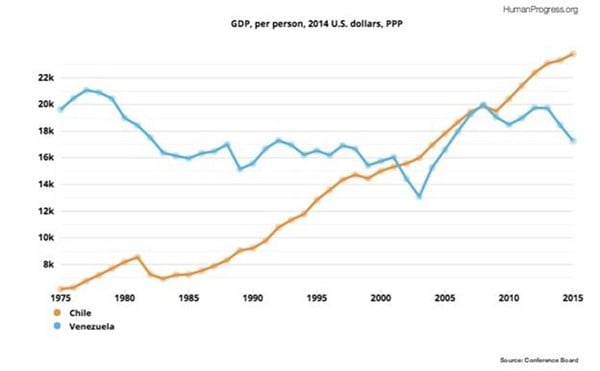 As far as I’m concerned, everything you need to know about capitalism vs. statism is captured in this chart comparing per-capita economic output in Chile and Venezuela.

Ask yourself which country offers more opportunity, especially for the poor? The obvious answer is Chile, where poverty has rapidly declined ever since the country shifted to free enterprise. In Venezuela, by contrast, poor children die of malnutrition thanks to pervasive interventionism.

So now I mostly wonder whether leftist apologists feel any shame when they see grim news from that statist hellhole.

For instance, what does Joe Stiglitz think about this report from the Miami Herald?

At 16, Liliana has become the mother figure for a gang of Venezuelan children and young adults called the Chacao, named after the neighborhood they’ve claimed as their territory. The 15 members, ranging in age from 10 to 23, work together to survive vicious fights for “quality” garbage in crumbling, shortage-plagued Venezuela. Their weapons are knives and sticks and machetes. The prize? Garbage that contains food good enough to eat. …A year ago, the gang was “stationed” around a supermarket at a mall called Centro Comercial Ciudad Tamanaco that generates tons of garbage. But a feared rival gang from the neighborhood Las Mercedes also wanted the garbage.

And what does Bernie Sanders think about this story from NPR?

The Pharmaceutical Federation of Venezuela estimates the country is suffering from an 85 percent shortage of medicine amid an economic crisis… The entire Venezuelan health care system is on the verge of collapse, says Francisco Valencia, head of the public health advocacy group Codevida. Some hospitals lack electricity, and more than 13,000 doctors have left Venezuela in the past four years in search of better opportunities. “They don’t give food to the patients in the hospital…” Government data shows infant mortality rose by 30 percent in 2016… The International Monetary Fund predicts inflation will soar to 13,000 percent this year and the economy will shrink by 15 percent. …The monthly minimum wage for many Venezuelans is now equal to $3, according to the AP. …Maduro blames the country’s growing crisis on…the U.S…leading an effort to wipe out socialism in Venezuela.

I’d be curious to know what Michael Moore thinks about this news from CNN?

Venezuela’s devastating food crisis means wheat flour has become a rare commodity in the country. Some churches have run out of the ingredient needed to make the sacramental bread that is central to celebrating the Holy Eucharist… So, members of the Catholic diocese of Cúcuta, Colombia, braved heavy rain this week to deliver the wafers over a bridge that connects the two countries… Venezuela’s economic crisis, fueled by a decline in oil production, shows no signs of improvement.People are starving because of routine food shortages. They are dying in hospitals because basic medicine and equipment aren’t available.

And what does Jeremy Corbyn think about this Bloomberg report?

Ruiz’s weekly salary of 110,000 bolivares — about 50 cents at the black-market exchange rate — buys him less than a kilo of corn meal or rice. His only protein comes from 170 grams of canned tuna included in a food box the government provides to low-income families. It shows up every 45 days or so. “I haven’t eaten meat for two months,” he said. …Hunger is hastening the ruin of Venezuelan’s oil industry as workers grow too weak and hungry for heavy labor. With children dying of malnutrition and adults sifting garbage for table scraps, food has become more important than employment, and thousands are walking off the job. …Venezuela, a socialist autocracy that once was South America’s most prosperous nation, is suffering a collapse almost without precedent.

Or how about getting Sean Penn‘s reaction to this story from the New York Times?

For the past three weeks, Wilya Hernández, her husband and their daughter, 2, have been sleeping on the garbage-strewn streets of Cúcuta, a sprawling and chaotic city on Colombia’s side of the border with Venezuela. Though Antonela, the toddler, often misses meals, Ms. Hernández has no desire to return home to Venezuela. …“I sold my hair to feed my girl,” Ms. Hernández said, pulling back her locks to reveal a shaved head underneath, adding that wigmakers now walk the plazas of Cúcuta where many Venezuelans congregate, wearing signs advertising that they give cash for hair. …“If I can’t afford to go the bathroom, I’ll go on the street,” Ms. Hernández added. “That’s when guys walking by say creepy things.”

I wonder if Noam Chomsky has any comments about this Washington Post story?

A friend recently sent me a photograph…, just a blurry cellphone shot of trash… And yet I can’t stop thinking about it, because strewn about in the trash are at least a dozen 20-bolivar bills, small-denomination currency now so worthless even looters didn’t think it was worth their time to stop and pick them up. …according to the “official” exchange rate, …each of those bills is worth $2. In fact, as Venezuela sinks deeper…into…hyperinflation…, bolivar banknotes have come to be worth basically nothing: Each bill is worth about $0.0001 at the current exchange rate… It’s easy to see why the thieves left them behind.

Last but not least, I wonder what Jesse Jackson thinks about this news from the U.K.-based Guardian?

More than half of young Venezuelans want to move abroad permanently, after food shortages, violence and a political crisis escalated to new extremes in 2017, according to a new survey. Once Latin America’s richest country, Venezuela’s economy is now collapsing… One of the most painful effects of the current crisis has been widespread hunger. In 2015, when inflation and food shortages were well below current levels, nearly 45% of Venezuelans said there were times when they were unable to afford food; in the latest study, that figure had risen to 79% – one of the highest rates in the world. …Norma Gutiérrez, a radiologist in eastern Caracas, is one of those…would-be migrants. Acute shortages in the hospital where she works depress her, and she says the idea of emigrating crosses her mind at least once a week.

By the way, in an example of unintended humor, the Socialist Party of Great Britain has a ready-made answer to all those questions. The misery is the fault of capitalism. I’m not kidding.

And folks on the establishment-left occasionally try to imply that it’s all the result of falling oil prices.

Two years ago, I concocted a visual showing the “Five Circles of Statist Hell” and speculated that Venezuela was getting close to the fourth level. Though I still don’t think it’s nearly as bad as North Korea. 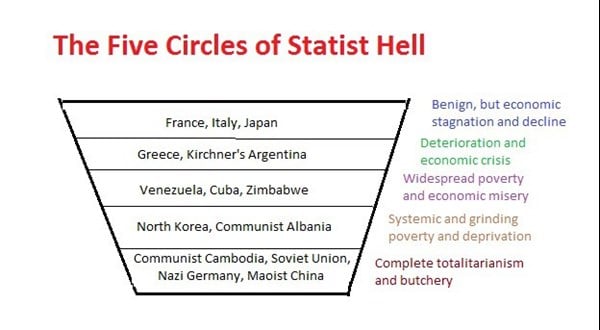 P.S. Since I mentioned unintentional humor, you’ll be amused to know a “Happy Planet Index” created by radical environmentalists places Venezuela above the United States.

P.P.S. And here’s some intentional dark humor about hunger in Venezuela.