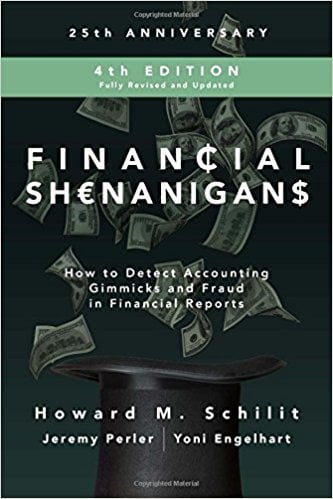 It has been 25 years since Howard M. Schilit first published Financial Shenanigans: How to Detect Accounting Gimmicks and Fraud in Financial Reports. And it has been eight years since I reviewed the third edition of the book, starting, and hopelessly dating, my post with the words: “with Jeff Skilling (and now Richard Scrushy) back in the news….” It seems like a lifetime ago. But, alas, financial shenanigans never go out of style. And investors must keep an eye out for them.

In this fourth, fully revised and updated edition (McGraw-Hill, 2018), Howard Schilit, with the help of co-authors Jeremy Perler and Yoni Engelhart, delves deep into ways in which companies, even reputable companies, cook their books and corporate management teams fool investors. The book is a must read for every active investor. And, of course, a bonanza for short sellers.

So, what kinds of ruses do companies use? They manipulate earnings, cash flows, and key metrics, and they employ “creative” acquisition accounting. Schilit explains these ploys in easily understandable prose and illustrates them with case studies.

Let’s look at a single case study, new to this edition, and one of my personal favorites: Valeant. In 2007 Valeant hired McKinsey & Company to help jump-start its growth. The team, led by Michael Pearson, “advised a radical strategy—cutting internal R&D and pursuing growth through acquisitions and price increases.” The following year Valeant recruited Pearson to become its CEO, and he set out on an acquisition spree.

In 2010 Valeant and Canadian-based Biovail agreed to merge and, for tax purposes, to locate the headquarters of the combined company in Quebec. Biovail had had a sordid accounting history, but Valeant overlooked such “trivial details.” Two years later Valeant acquired another company with a well-known history of accounting problems, Medicis. In 2013 Valeant paid a steep premium for the financially troubled Bausch & Lomb. Then, in the widely reported and followed “unorthodox” partnership with Bill Ackman, the company set its sights on Allergan but was rebuffed. In 2015 Valeant acquired Salix Pharmaceuticals, another troubled company “just working its way through a major accounting scandal.”

With each acquisition investors cheered and Valeant’s stock price jumped. When Pearson became CEO its stock price was $13.24. Soon after the Salix acquisition it hit its all-time high of $262.52. Expensive acquisitions of tainted or troubled companies caused Valeant’s GAAP-based losses to intensify, “but the profitability metric that management focused on, ‘cash earnings,’ grew and compounded.” This was accounting gimmickry. “Acute investors understood that while it was impossible to know the exact catalyst that would spark the unraveling, they knew the downfall would be inevitable, no matter how big the balloon inflated.”

A Hillary Clinton tweet about price gouging dinged the stock, but it was the exposé of Valeant’s fraudulent relationship with Philidor Rx, a mail-order pharmacy, that sent its stock into free fall. Pearson was ousted as CEO, the SEC began investing the company for fraud, and all the debt raised to finance acquisitions came back to haunt it. “By April 2017, … Valeant’s share price crash-landed below $9, an incredible decline of 96 percent from its summer 2015 peak.”

Analysis in hindsight, of course, is much easier than analysis in real time, but with the proper tools investors can avoid companies poised to crash and burn—or short them. Financial Shenanigans is a great place to start learning the ropes.