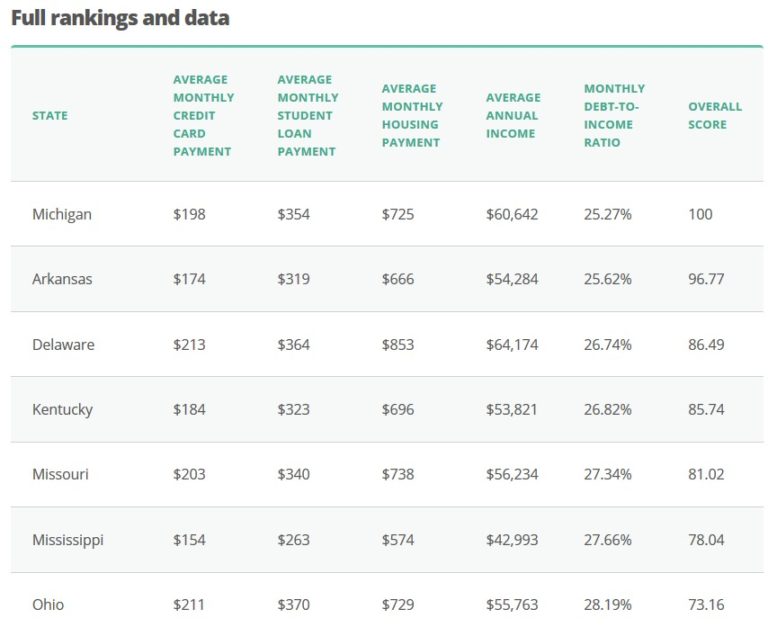 No matter what state you live in, there’s a good chance you carry some kind of debt. However, it might never have occured to you that the state you live in can have a big impact on how much you spend on debt payments. A recent study by Credible examined credit card bills, student loan debt, and housing costs for individuals in all 50 states. The results show a variety of differences that might surprise you.

Using proprietary data, the study looked at debt compared to monthly income. Information from over 540,000 borrowers was used to calculate average monthly credit card, student loan, and housing payments as a percentage of average monthly income (debt-to-income ratio). The higher the number, the more you pay as a percentage of your income each month towards debt payments.

The states with the lowest debt-to-income were Michigan, Arkansas, Delaware, Kentucky, and Missouri. According to the Credible dataset, those living in Michigan spend only 25.3% of their monthly income on credit card, student loan, and housing debt each month.

Another way to break down the data is by average monthly income and how much of that goes towards debt payments. The differences can be significant. For example:

Other interesting data points are national averages. How does your financial profile stack up? In the study dataset, these were the results:

Although the numbers are compelling, it’s important not to generalize. Each person’s debt is highly personal. Still, where you live definitely has an impact. If you have a lower debt-to-income ratio than your state’s average, then good for you. If not, maybe you should be looking for ways to lower your monthly debt payment.

Check out the full Credible report: Burdened by Debt: The Best and Worst States at Managing Debt.