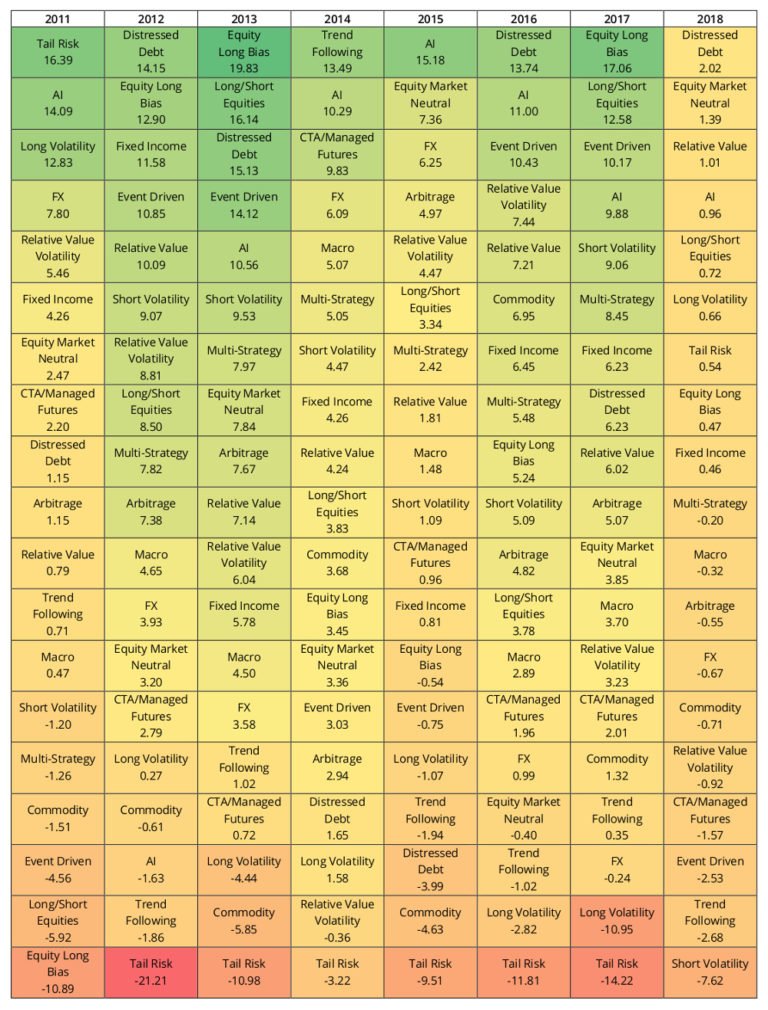 Hedge funds registered their second consecutive month of losses since the start of 2018, with the Eurekahedge Hedge Fund Index declining 0.51%1 in March, while still outperforming the MSCI World Index2 which ended the month down 2.21%. The average return of global hedge funds was pulled into negative territory in March as choppy trading conditions across commodities, and weaker global equity performance continued to affect the trading scene. March was marked by investors’ concerns over the US and China trade war which made headlines throughout the month and negatively affected the global equity markets, most of which ended the month in the red. As of Q1 2018, hedge funds are down 0.10% ahead of underlying markets as the MSCI World Index posted losses of 2.24%. Close to 56% of managers were in positive territory and roughly 5% posted year-to-date returns in excess of 10% over the first quarter. Latin American managers led among regional mandates this month with their 4.30% gain, while relative value managers topped the table across strategies, gaining 2.92% over the month.

Looking at year-to-date performance, Latin American managers outshone their peers from other regions with gains of 5.21%. Meanwhile, distressed debt hedge fund managers posted the best Q1 2018 performance among all strategies based on preliminary numbers, gaining 2.02% over the quarter, followed by relative value managers who generated gains of 1.01%.

Below are the key highlights for the month of March 2018:

Performance across regional mandates was a mixed bag in March, with Latin America as the only region to end the month in positive territory, up 0.83% as managers’ performance was supported by the strength in underlying equity markets in Latin America. The Ibovespa Index was up a modest 0.01% in March and up 11.73% year-to-date, supported by interest rates cut and falling inflation numbers in Brazil. Meanwhile, the Eurekahedge Eastern Europe & Russia Hedge Fund Index slipped 3.70%; the worst performer of the month, underperforming the Russian RTS stock index which fell 2.81%. Asia ex-Japan and Japanese managers were also down this month losing 1.79% and 0.95% respectively as most Asian equity markets continued their downward trend going into March. Greater China mandates ended the month down 0.79% while India dedicated strategies posted losses of 2.47%. Chinese equities were the biggest losers among Asian markets throughout March with the CSI 300 Index ending the month down 3.11%. The Nikkei 225 Index declined 2.78% on the back of a stronger yen.

European managers were also in negative territory during the month with managers posting a decline of 0.50% backed by weakness in the region’s equity markets which were all red in the month, impacted by global trade worries. North American hedge fund managers also languished, losing 0.18% in March somewhat still outperforming the region’s equity markets. While the Fed raised interest rates in line with expectations, investors were cautious when the expectations of a speed up in tightening (more than three rate hikes) would not match by the Fed’s outlook. Coupled with the US-China sanctions and the sentiments on the US trade policies, the USD retreated during the month with the US dollar index down 0.71%. Weakness in North American equity markets was led by the DJIA and S&P 100 for the month, both of which declined 3.70%.

As of Q1 2018, the Eurekahedge Latin America Hedge Fund Index led among regional mandates and was up 5.21% year-to-date followed by Eastern Europe & Russia and emerging markets dedicated mandate, which were up 3.49% and 2.19% respectively. Japan dedicated mandates have been the worst performers for the year with the Eurekahedge Japan Hedge Fund Index down 0.84% year-to-date amid yen appreciation. Asia ex-Japan and North American hedge funds were also down 0.55% and 0.40% over the same period. European mandates languished at the bottom of the table, down a modest 0.10% year-to-date with the uncertainty surrounding Brexit likely to complicate things further for the region.

Hedge fund strategies continued to post losses going into March with event driven hedge funds posting the worst performance among strategies, down 3.04% during the month as managers in this mandate were heavily impacted by several negative turns of events in the market, particularly the rhetoric stance of US administration. Managers with exposure into the bonds, financials, communications and space technology were among the performance detractors. Multi-strategy and macro mandated hedge funds followed next with declines of 0.86% and 0.62% respectively over the same period. Arbitrage and CTA/managed futures hedge funds were also in negative territory this month, losing roughly 0.42% and 0.36% respectively with managers reporting strong losses from their exposure to commodity and FX futures. The weakness was led by underlying CTA FX sub-strategy with the Eurekahedge FX Hedge Fund Index down 1.45% during the month, as managers were caught in the USD reversal late into the month giving back the gains made from shorting the dollar. Among short term programs, going into long USD/JPY towards month-end did cushion the impact of the reversal to some extent, but this was not sufficient to recoup losses made during the reversal. This led to investors unwinding their bets on the US dollar and also US sovereign bonds, with yields on 90-day Treasury bills ending the month higher. The weakening of the dollar towards month-end benefitted managers with position into precious metals, with long position into gold being a performance contributor for managers. Long position in energy continued to prove to be detrimental for managers as crude oil prices resumed an upward trend on the back of speculations that the production cuts will be extended. In base metals, copper prices have eased during the month amid rising global trade tensions and concerns over demand, resulting in losses over long positions in copper for the month.

Long/short equities managers were down 2.29% in March as average fund performance across the globe stayed largely negative due to strong headwinds from underperforming markets in regions such as Asia, North America and Europe. Weakness in equity market performance was led by Asian markets with mixed to flat performance across European equity markets. Fixed income hedge funds also struggled with the very real prospect of negative long term rates, returning only 0.24%.

On the other hand, relative value hedge funds were up a marginal 0.31% for March, with mixed performance among its underlying volatility strategies. Long volatility hedge fund managers led much of the strength during the month, gaining 1.21% with the CBOE VIX Index rising modestly from 19.85 to 19.97 in March. Short volatility managers continued to post losses of 0.88% for the month bringing its Q1 figures in the red - down 7.62%. Distressed debt hedge fund managers were also in positive territory, returning a modest 0.05% outperforming the US high yield market which declined 0.62% during the month.

As of Q1 2018, the Eurekahedge Distressed Debt Hedge Fund Index led among strategies with gains of 2.02%, on the back of recovery in energy prices. Given the dislocations that are likely to abound in the markets as the full ramifications of Brexit come to the fore, relative value trading strategies in the equity, credit and FX space could surprise investors pleasantly in the months to come. The Eurekahedge Relative Value Hedge Fund Index was also up 1.01%. Meanwhile, event driven hedge funds performed poorly in the first quarter, losing 2.53%.