ValueWalk
Home Info-Graphs Gun Violence In America: How Bad Is It Really? 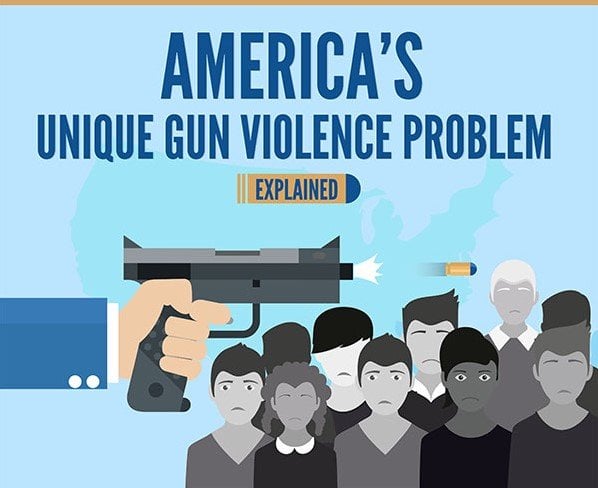 America has a rather unique relationship with guns. For the last three decades, they have been constitutionally protected and out of the government’s control. We rely on statistics to point out just how bad gun violence is in our nation.

The majority of these statistics are far from accurate, as the federal government has legally been unable to fund the investigation into gun violence.

At least, until now – everything has changed.

NPO's Have Different Agendas, Which Is Why Research On Gun Violence Is Biased

Regardless of the severity of gun violence, the recent murders would make you think the government is knee-deep in research to counteract the problem.

Honestly? The government is just as in the dark as you are.

Based on the Dickey Amendment, the government had no authority to research the factors leading to gun violence or generate set-in-stone statistics - or anything even vaguely related to the matter.

However, since the latest Parkland shooting, which has left communities in an uproar, Congress has finally decided to lift this ban – meaning we can finally start making proper steps towards rectifying gun violence.

With The Ban Lifted, We Are Going To Start Seeing Unbiased Research On Gun Violence

Gun-related research was officially halted in 1996. That means there is over 22 years of catch-up that needs to happen before the government will make any moves to help balance out the threat that citizens are facing on a daily basis.

Mark Rosenberg, former lead-researcher of gun violence in the 1990s stated, “in the area of what works to prevent shootings, we know almost nothing.”

Congress has already claimed that their first step in understanding gun violence and how to reduce its occurrence is to research the matter.

However, substantial time and resources will need to be invested before any actionable intel is found to help remedy the problem.

What Do We Know

Due to what could be biased research, the information that we have on gun violence has led to a ton of controversy.

There are arguments made daily regarding gun violence. Are homicides really at an all-time high? Is America really one of the top gun-populated countries in the world?

We don’t know if these are accurate, so why are they important?

What we do know is that regardless of how bad it is – gun violence is a problem in our nation.

Students are getting up and walking out of school in protest. Businesses are restricting their sales of firearms. And politicians are turning towards the legalities of the gun laws currently in place.

The research that we do have points out some pretty obvious facts. Regardless of whether it’s a suicide or an actual mass shooting, gun-related incidents resulting in death is on the rise.

Let’s avoid the elephant in the room – school shootings.

We know that women tend to be shot more often than men. But we have no clue why. The research that we do have points out that shootings are more likely to happen over a weekend then during a week.

With the Dickey Amendment finally being lifted, we will now be able to take everything that we already have on gun violence, tie it in with future research projects, and slowly start bringing gun control back into a country that desperately needs it.