ValueWalk
Home Economics Government Won’t Save You Amid Exploding Debt 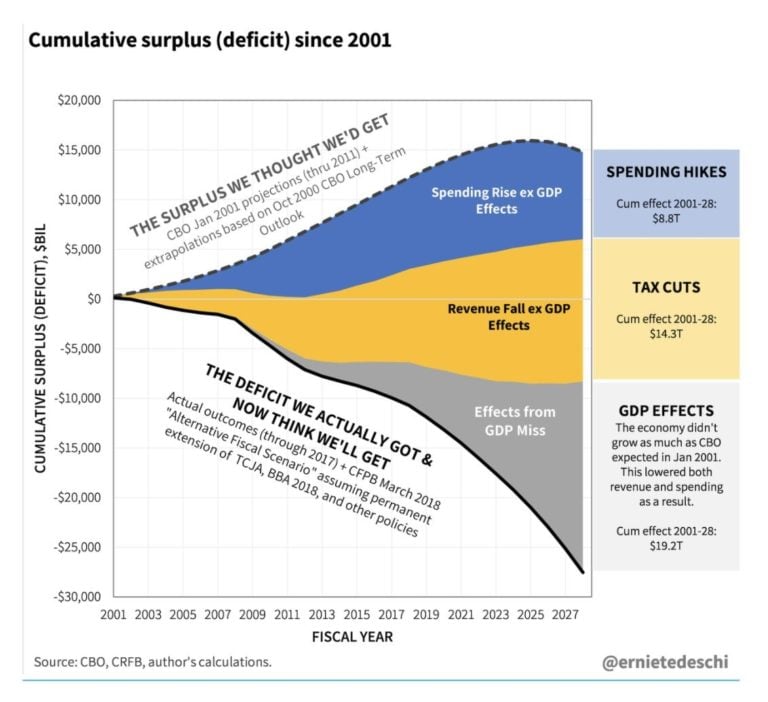 In normal circumstances you don’t want to depend on the government because no one who relies exclusively on transfer payments (excluding people collecting public pensions) is living a comfortable successful financial life. The current budget situation for the government is dire, so your personal goal to avoid relying on the government for anything, even social security, is amplified. You should also expect taxes to go up if you are wealthy because the government is strapped for cash. The current political reality makes it seem like taxes won’t be raised, but the winds can easily shift since inequality is such a big issue with middle and lower class voters. It looks like the GOP will maintain the Senate in 2018, but one election isn’t important when coming up with your personal financial plan for the rest of your life. It’s best to be conservative and not assume the best case scenario will occur. We’re not advising you to put your cash under your mattress; just be conservative with your spending habits.

The chart below explains how bad the situation is for the government.

Budget Expectations Were Wrong By A Lot

Expecting taxes to fall and government spending to increase forever is a mistake. The government’s balance sheet wasn’t terrible in 2000 as it was right after the strong 1990s economy and before the middle eastern wars became an albatross on the budget. That’s why the dotted blue line shows the long term outlook for the surplus from October 2000 was very optimistic by today’s standards. Expectations were for a $15 trillion cumulative surplus, but we’ve seen a $28 trillion cumulative deficit. The increased spending from 2001 to 2028, excluding the GDP effects, has caused the cumulative surplus to fall by $8.8 trillion.

The Bush tax cuts and the Trump tax cuts from 2001-2028 cost the government $14.3 trillion. Normally we’d say the tax cuts are just returning more of the tax payer’s money to them. However, the government can’t pair tax cuts with spending increases, so we’ll go along with expensing the tax cuts. A tax cut isn’t a real tax cut if the government spending increases because it will collect the money eventually from the same taxpayer. The government can run a deficit for much longer than an individual, but there are crowding out effects where government expansion prevents private companies from thriving. Over time a weak economy and budget deficits will cause the dollar to lose its reserve currency status and the debt will have a higher interest rate, furthering the problem. Just because no major effects have appeared yet doesn’t mean the risk doesn’t exist.

The spending and revenue shortfalls bring the surplus to a deficit. The largest shortfall is the effect from missing GDP growth expectations. The cumulative effect on the budget from 2001 to 2028 is $19.2 trillion. Even though the economy has avoided a recession for 9 years, the GDP growth per year has been moribund. This has lowered government revenue and increased spending. The forecast in the chart expects a $28 trillion cumulative deficit based on the assumption that the Tax Cuts and Jobs Act and Bipartisan Budget Act are made permanent. Low growth, high spending, and low tax rates are a killer.

33% of Americans age 55 and over have less than $10,000 saved for retirement which is essentially retiring broke. They will rely on the government to take care of them or possibly family members. That’s not a smart choice since the government is running massive deficits. The government currently gives people the opportunity to save money tax free through plans such as an IRA or a 401K yet people aren’t taking advantage of that. Baby boomers have recently lived through one of the best equity bull markets in history, but they still struggle with building up a nest egg to retire with.

As you can see from the chart below, 40% of people save 5% or less than their annual income. That likely is not enough although it depends on how much a person makes and how much money they have invested. The problem is that people in the lower class have a tough time saving money. Not much can be compounded over time with such little savings on a low income.

These numbers sound fine, but saving less per month doesn’t allow the math to work. $1,600 per month is a 42.67% savings rate. The goal of this scenario is to show how difficult it is to buy a house in your late 20s while saving for retirement. This is demonstrated by the fact that the American Dream Is Now Tiny as we discussed previously, or that the US is becoming a renter nation. A savings rate under 5% simply isn’t close to what is necessary to meet these goals. You may think $6,000 per month is a lot to spend in retirement, but a 24 year old reaches 70 in 46 years. Inflation could make that amount of money not enough to live off even if the person owns their house outright. Compound annual returns on a tax free account can be marvelous to forming a stable retirement, but they are also necessary to successfully combat inflation.

The chart below shows why people don’t save.

People Know They Need To Save More, But Complain About High Expenses & Low Pay

Only 6% of people think they don’t need to save more. People know they need to save more money, but their high expenses and low pay doesn’t allow them to. You need to take control of your own destiny by making a conscious effort to spend less money and possibly work more to earn more. While it’s important to live in the moment and spend money in years where you can enjoy it which is from your 20s to your 60s, retiring with no money is reckless. Tough choices need to be made if you are on that financial path of destruction.

There’s nothing wrong with rewarding yourself with a vacation or other desired object, if you have earned the money already. However, this needs to be done in a smart way. Consumer debt can be crippling. Living within your means by saving more of your income or earning more money is necessary if you’re on the wrong path. You don’t want to rely on a bankrupt government to take care of you after you retire because the government is on a path to have $28 trillion in cumulative deficits.