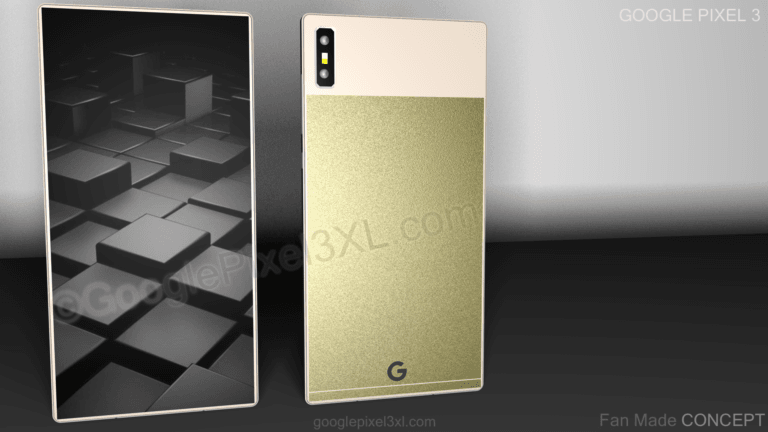 While the release of Google’s next flagship is likely a good way off, a recently revealed series of Google Pixel 3 concept images from the website GooglePixel3XL show us what we might be able to expect when the phone finally sees a release.

It’s important to stress that these Google Pixel 3 concept images aren’t an actual rendering from the company itself, rather representing an artist or designer’s creative take on what the phone might look like. While it’s not an official release from the company itself and there is certainly a possibility that the final phone we see from Google will be drastically different from these Google Pixel 3 concept images, but it’s certainly fun to look at and definitely takes into account the specifications of both the Pixel 2 and other high-end flagships when coming up with a feasible option for the next generation of phones. 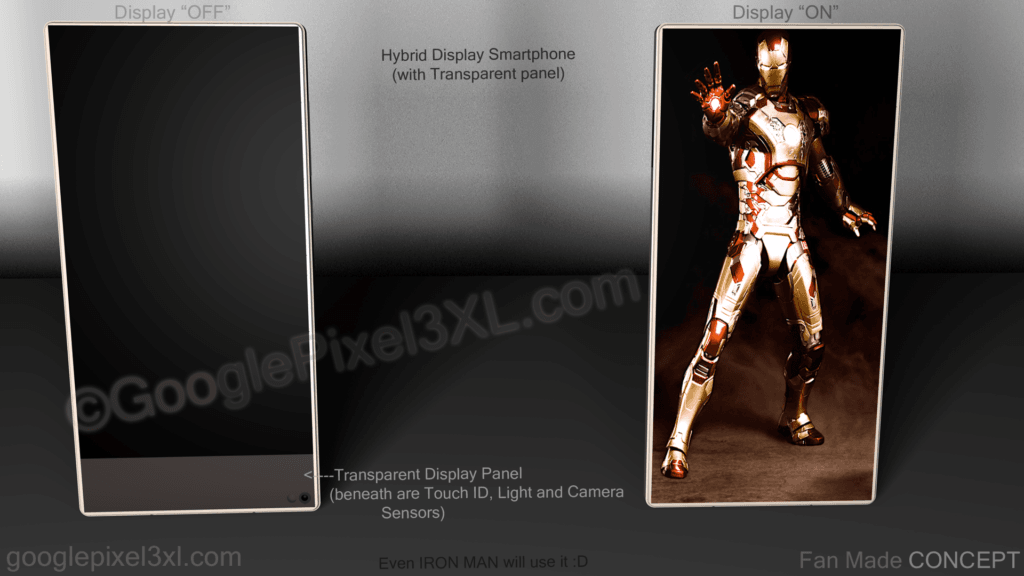 The Google Pixel 3 concept images, included below, suggest the phone will ship with a number of features that could certainly make it a major contender in this upcoming generation of high-end flagships. While Google is a relative newcomer to the smartphone scene, they are already starting to capture the attention of a flagship market that is currently dominated by Samsung and Apple. Many users are noticing some technical issues with the Google Pixel 2 and some of the bad press regarding these problems may have caused sales problems for the tech giant, but if the company can manage to iron out these issues and deliver a phone like these Google Pixel 3 concept images suggest without any major flaws, we could potentially see a Google smartphone dominating the sales as we move further into 2018.

As expected, the display of the phone is a near-edge-to-edge design, with a Full View screen covering 97 percent of the front. Considering the recent trend of smartphones eliminating the bezel as much as possible, it’s likely that something like this will make the jump from Google Pixel 3 concept images into the final release. Due to the edge-to-edge format of the display, we may also see a transparent panel at the bottom of the phone that houses multiple pieces of technology – including a fingerprint scanner for TouchID and the front camera. The fingerprint scanner may be pretty unique, allowing users to touch anywhere on the transparent panel itself to unlock the phone, and taking advantage of new in-screen sensor technology to bring 2018 smartphones a step further into the future. The inclusion of the camera at the bottom of the front display is also a novel idea that sets these Google Pixel 3 concept images apart from the designs of other companies, so it will interesting to see if we see that feature make it to release. 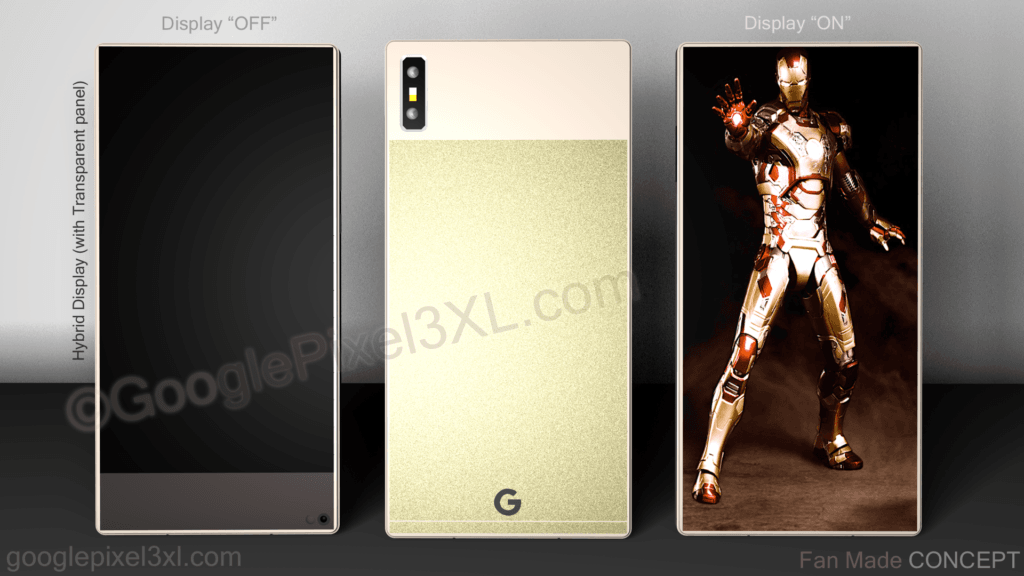 Fans of the headphone jack will be happy to see that it made the cut – at least according to these Google Pixel 3 concept images. While Apple may be leading the charge towards a fully-Bluetooth future, the fact remains that technology and adoption aren’t quite to the point where it makes sense to fully ditch the headphone jack. Rest assured that the Google Pixel 3 will allow you to listen to your favorite tunes without having to buy a new pair of headphones or specialized adapter. When making calls, you’ll see the integrated earpiece speaker included behind the display glass for a seamless yet effective construction.

While the Google Pixel 3 concept images largely focus on design first and foremost, the designer has included some potential specifications – including 8GB of RAM, 128GB storage memory, and a Snapdragon 85X Processor. Considering that the Samsung Galaxy S9 shipped with an 845 processor, it will be interesting to see if Qualcomm makes quick enough progress for us to see a Google Pixel 3 with a new generation of processor. If this were to truly happen, the Pixel 3 may shape up to be the fastest phone on the market by a large margin. 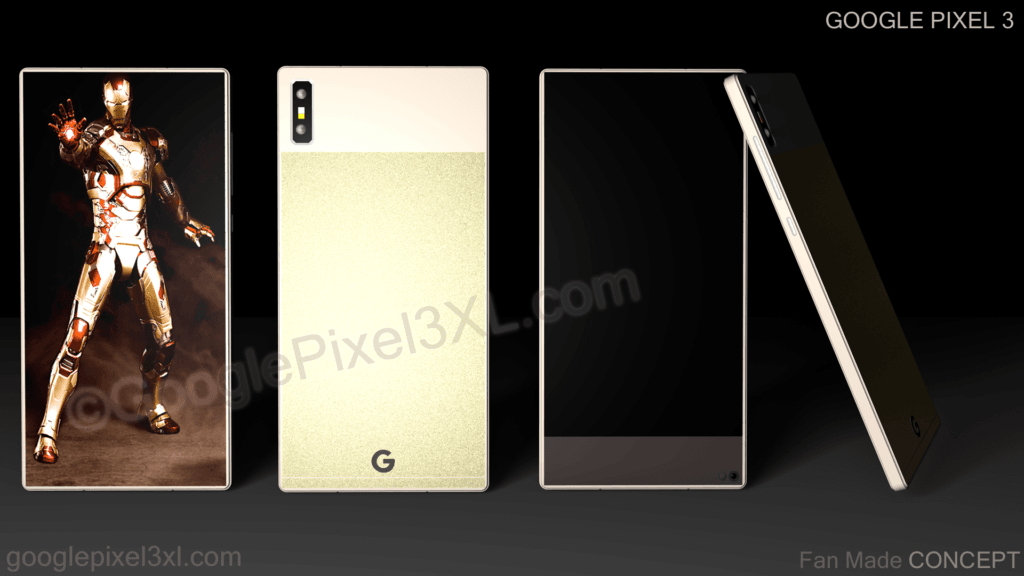 As mentioned above, these Google Pixel 3 concept images aren’t necessarily a representation of the company’s thoughts themselves. However, it’s always cool to daydream about the features of upcoming phones, and it will be cool to see how similar or different the final release is to the artist’s renderings.

The Google Pixel 3 concept images are included courtesy of GooglePixel3XL.com