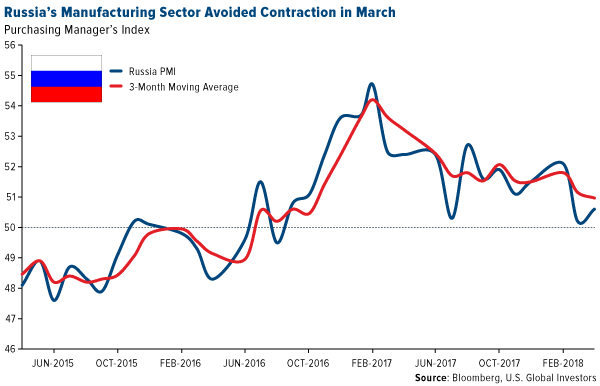 With volatility returning to domestic equities, it might be time for investors to consider increasing their exposure to foreign markets, specifically emerging Europe. As I shared with you in January, emerging Europe countries, as measured by the MSCI EM Europe 10/40 Index, finished last year up more than 20 percent, and so far in 2018 they’ve returned 1.17 percent, compared to the S&P 500 Index, which is down more than 3 percent.

One of our favorite ways to measure growth, whether on a macro scale or in individual markets, is by using the manufacturing purchasing manager’s index (PMI). Whereas gross domestic product (GDP) is backward-looking, PMI is a forward-looking economic indicator. We’ve found that it can forecast productivity and manufacturing activity three and six months out with a satisfactory level of accuracy.

With that in mind, I’d like to share with you the top six fastest growing countries in emerging Europe, based on their just-released manufacturing PMIs for the month of March. Each market’s reading is currently above 50, indicating expansion, which is very good news indeed for the group as a whole. The higher the number, the faster the expansion.

We’ll start with the country with the lowest PMI in the group and work our way up.

Russia’s manufacturing sector improved a shade better in March compared to February, when it came close to giving up all momentum for the first time since August 2016. Geopolitical headwinds now threaten continued expansion, including additional international sanctions and rising tensions between the country and North Atlantic Treaty Organization (NATO) ally nations. At the same time, BCA Research recently took a positive view of Russia, saying the country’s conservative fiscal policy has allowed expenditures to grow only slightly since the oil crash in 2014. Overall spending has fallen considerably, improving the deficit. Turkey isn’t just one of the fastest growing economies in Central and Eastern Europe (CEE)—it’s among the fastest in the world. Last year it defied skeptics by growing its GDP an estimated 7.3 percent year-over-year, more than China and India, thanks to a surge in household and government spending. Although the country’s March PMI came in lower than expected, its rate of growth is still above the historical trend, supported by greater volumes of new orders and rising output.

Poland is one of the world economy’s great success stories right now. A communist nation as recently as 1989, Poland has since transformed itself into one of the fastest growing free-market economies in the euro area. This September, in fact, the Eastern European country will officially be upgraded from the “advanced emerging” category to “developed” by FTSE Russell, placing it in the same company as other high-income nations such as the U.S., U.K., Japan, Germany and others. In March, Poland’s PMI came in at a healthy 53.7, unchanged from its February reading. The manufacturing sector has now expanded for 42 straight months, a record since the series began in June 1998.

After nearly a decade of debt woes and government mismanagement, it finally looks as though Greece is catching a break, thanks in large part to massive amounts of foreign investment. Unemployment is falling rapidly, GDP growth has been positive for the past four quarters and its manufacturing sector is in expansion mode. The PMI for the Mediterranean country posted an incredible 55 in March, with business confidence and employment growth both hitting record series highs. Believe it or not, Hungary’s economy could be the crown jewel among CEE nations in 2018. According to Italian investment bank UniCredit, Hungary could potentially grow its GDP 4.5 percent this year on fast net wage growth and deleveraging, which is expected to support consumption and private investment. As for its manufacturing sector, the PMI reading for March came in at 57, down a hair from its February reading of 57.4. That leads us to the fastest growing CEE nation…

Having posted a 57.3 PMI reading in March, the Czech Republic is currently the fastest growing nation in Central and Eastern Europe. Although the overall PMI slipped from 58.8 in February, the country is benefiting from sharp improvements in operating conditions across the value chain, including new orders and output. What’s more, growth is projected to improve even more over the next 12 months. In his monthly commentary, IHS Markit economist Sian Jones says that Czech business owners are “largely optimistic in regard to the year-ahead outlook, with over half of survey respondents expecting a rise in output.”