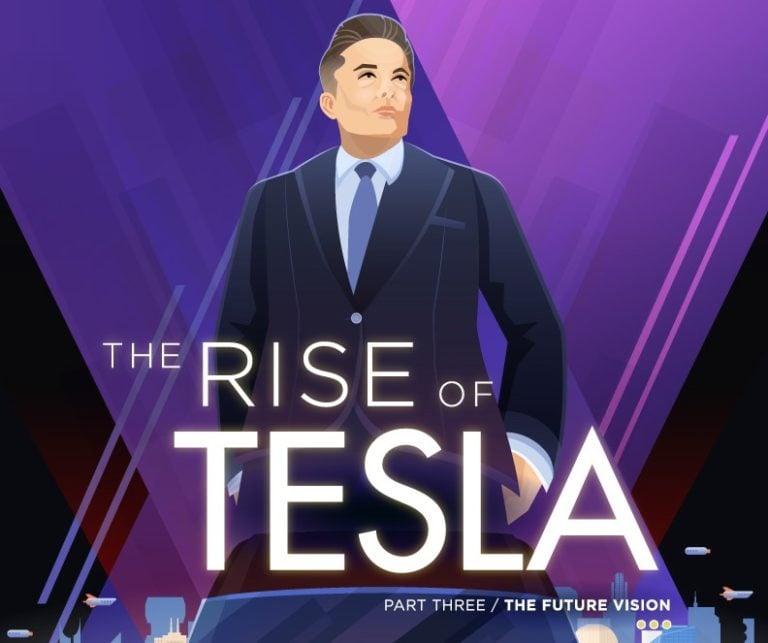 Tesla is currently stuck in “production hell” with Model 3 delays, as Elon Musk describes it.

But Winston Churchill had a great quote about facing what seems like insurmountable adversity: “If you’re going through hell, keep going”. This is certainly a maxim that Musk and Tesla will need to live by in order to realize the company’s longstanding mission, which is to accelerate the world’s transition to sustainable energy.

Today’s giant infographic comes to us from Global Energy Metals, and it is the final part of our three-part Rise of Tesla Series, which is a definitive source for everything you ever wanted to know about the company.

Part 3 shows Elon Musk’s future vision, and what it holds for the company once it can get past current production issues.

To understand Tesla’s ambitions for the future, you need to know two things:

Tesla can accomplish this by making electric vehicles, batteries, and energy solutions – and by finding ways seamlessly integrate them all together.

Tesla aims to productize the factory, so that vehicle assembly can be automated at a revolutionary pace.

In other words, Tesla wants to perfect the making of the “machine that builds the machine”. It wants to use these factories to pump out EVs at a pace never before seen. It aims to change the world.

The Future of Tesla

If Elon Musk has his way and everything goes according to plan, this is how the future of Tesla will unfold.

Note: Keep in mind that Tesla sometimes overpromises – and that the following is an extrapolation of Tesla’s vision and announced plans as of Spring 2018.

Tesla’s goal is to accelerate the world’s transition to sustainable energy – but simply making a few electric cars is not going to be enough to put a dent into this.

That’s why the future of Tesla will be defined by bigger and bolder moves:

The Tesla Semi: Tesla has unveiled the Tesla Semi, which can go 0-60 mph with 80,000 lbs (36 tonnes) in just 20 seconds. Fully electric, and with a 200 kWh battery pack, Musk says that it would be “economic suicide” for trucking companies to continue driving diesel trucks.

Mass Transit: Elon Musk said in his Master Plan, Part Deux blog post that he wants to design “high passenger-density urban transport”. It’s anticipated that this will come in the form of an autonomous minibus, built off the Model X concept.

A New Energy Paradigm: Tesla is not just building cars – it’s democratizing green energy by creating a self-dependent ecosystem of products. This way, homeowners can ensure their appliances and cars are running off of green energy, and even sell it back to the grid if they like.

As Tesla works on this sustainable future, the company isn’t afraid to show off its battery tech in the interim. The company even built the world’s largest lithium-ion battery farm (100 MW) in South Australia to win a bet, in fewer than 100 days.

Elon Musk says that Tesla plans to “address all major segments” of the auto market.

Model Y: This will be a crossover vehicle built on the Model 3 platform, expected to go into production in 2019. It will round out the “S3XY” product line of Tesla’s first four post-Roadster vehicles.

Pickup Truck: This will be Tesla’s priority after the Model Y, and Musk says he is “dying to build it”. Musk says it’ll be the same size of a Ford F-150 (or bigger) to account for a “game-changing” feature he wants to add, but has not yet revealed.

Ultra Low-Cost Model: Tesla has also announced that it will need a model cheaper than the Model 3 in the near future. This would allow Tesla to compete against a much wider segment of the auto market, and the future of Tesla hinges on its success.

The Gigafactory I started battery cell production in 2017. It will eventually produce enough batteries to power 500,000 cars per year. Meanwhile, the second factory is operated by Tesla’s SolarCity subsidiary, producing photovoltaic modules for solar panels, and solar shingles for Tesla’s solar roof product.

Tesla said in 2017 that there will be “probably four” more battery Gigafactories in locations that would “address a global market”, including one in Europe. This makes sense, since the need for lithium-ion batteries to power these EVs is exploding. An important component of Tesla’s future will also be source the raw materials needed for these Gigafactories, such as cobalt, lithium, graphite, and nickel.

The good news: Tesla already owns about 81% of the market for imported plug-in EVs in China.
The bad news: That’s only about 2.5% of the total Chinese EV market, when accounting for domestically made EVs.

China is the largest auto market in the world – and make no mistake about it, Tesla wants to own a large chunk of it. In 2017, China accounted for 24.7 million passenger vehicle sales, amounting to 31% of the global auto market.

Automation and the Sharing Economy

Finally, Tesla wants its vehicles to be fully autonomous, and to have shared fleets that drive around to transport people.

Autonomous: Tesla aims to develop a self-driving capability that is 10X safer than manual via massive fleet learning.
Shared: Most cars are only used by their owner for only 5% of each day. With self-driving cars, a car can reach its true potential utility by being shared between multiple users.

The future of Tesla is ambitious, and the company’s strategy is even considered naïve by some.

But if Elon Musk and Tesla are able to perfect the building of the “machine that builds the machine”, all bets will be off.

That concludes our three-part Rise of Tesla Series – don’t forget to see Part 1 (Origin Story) and Part 2 (Rapid Growth). We’d also like to offer a special thanks to Global Energy Metals for making this series possible, as well.