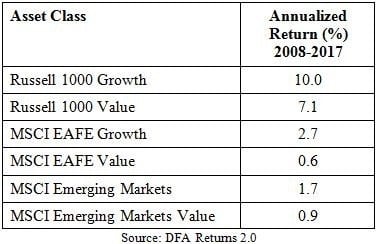 For the 10-year period 2008 through 2017, a very wide dispersion in returns has existed in markets. As the following table shows, U.S. stocks far outperformed international stocks, and growth stocks outperformed value stocks.

Given these results, it’s no surprise I have been getting lots of queries about international equity investments. Any time an asset class does poorly – even for a few years, let alone a decade – a significant number of investors will question why they own that asset.

One particular inquiry I received involved the fact that international equities not only had underperformed domestic equities since 2009, but they crashed in 2008. Just when the benefits from diversification were needed most, they failed to materialize. As a result, the advisor in this case doubted the reason for including international equities in his portfolio.

Among the errors discussed in my book, “Investment Mistakes Even Smart Investors Make and How to Avoid Them,” is one called recency. Recency is the tendency to overweight recent events/trends and ignore long-term evidence.

This leads investors to buy after periods of strong performance (when valuations are higher and expected returns are now lower) and sell after periods of poor performance (when prices are lower and expected returns are now higher). This results in the opposite of what a disciplined investor should be doing: rebalancing to maintain their portfolio’s asset allocation.

The problem created by recency is compounded when international stocks underperform, greatly increasing the risk that an investor will commit a mistake. This occurs because of another common error: confusing familiarity with safety, which leads to the well-documented, global phenomenon known as home-country bias.

To address questions about where the benefits of international investing can be found, we don’t have to look too far back in time. The problem is that investor memories can be very short, often much shorter than is required to be a successful investor. The period we’ll examine is the five years from 2003 through 2007, the period just before the Great Financial Crisis. 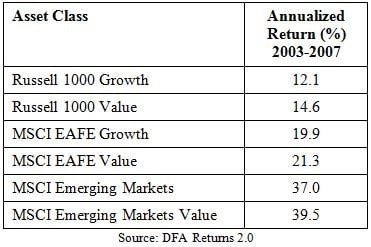 As you can see, results in this period (2003-2007) were just the reverse of what they were in the period following it (2008-2017), with international stocks far outperforming U.S. stocks and value stocks outperforming growth stocks. As Spanish philosopher George Santayana famously warned, “Those who cannot remember the past are condemned to repeat it.”