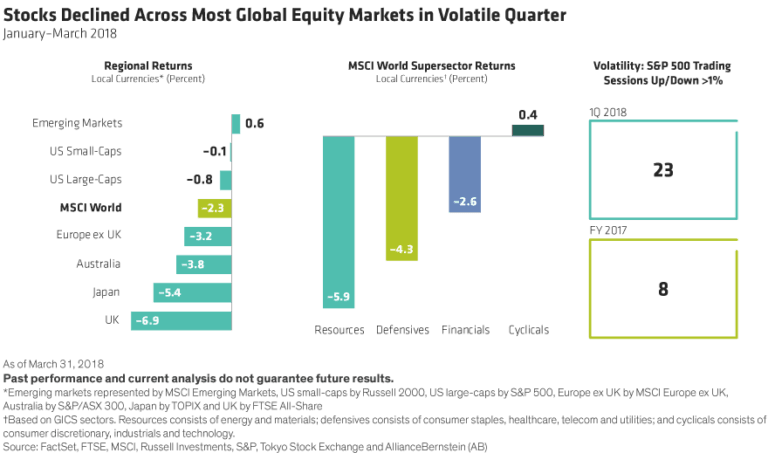 Global equities posted their first quarterly decline in two years during a volatile first quarter. Growing concerns about rising rates, trade wars and regulation in the technology sector will require a new mindset for investors.

The MSCI World Index fell by 2.3% in the first three months of the year in local-currency terms, with European and Japanese markets falling sharply (Display, left). US stocks were more resilient, but still ended the quarter down slightly. Yet the MSCI Emerging Markets Index advanced by 0.6%. Defensive stocks and resources led the declines (Display, middle), while cyclical stocks held up better. Growth stocks outperformed value stocks.

Volatility returned to the markets after several years of extraordinary calm, as we have anticipated in recent months. For example, the S&P 500 Index rose or fell by at least 1% in 23 trading sessions during the first three months of the year, compared to eight such sessions in all of 2017 (Display above, right). The renewed turbulence was triggered by a confluence of concerns that will require investors to apply new lenses when picking stocks for portfolios.

Investors around the world have been fixated on the US Federal Reserve’s rate hikes. But this isn’t just an American story. Over time, we expect other countries to begin raising rates too. In other words, the virtuous cycle of global easing that we’ve become accustomed to in recent years could rapidly shift toward a vicious cycle of monetary policy tightening and rising rates, which will affect companies and stocks in many different ways.

Beneath the surface, there are already signs that stocks are becoming more sensitive to rising rates. Our research shows that companies with higher debt ratios underperformed significantly in the first quarter, while companies with lower leverage have outperformed in developed and emerging markets alike (Display, left). Similarly, US large-cap equity funds with relatively low debt/capital ratios have outperformed, while funds with the highest debt ratio have trailed their benchmark (Display, right). 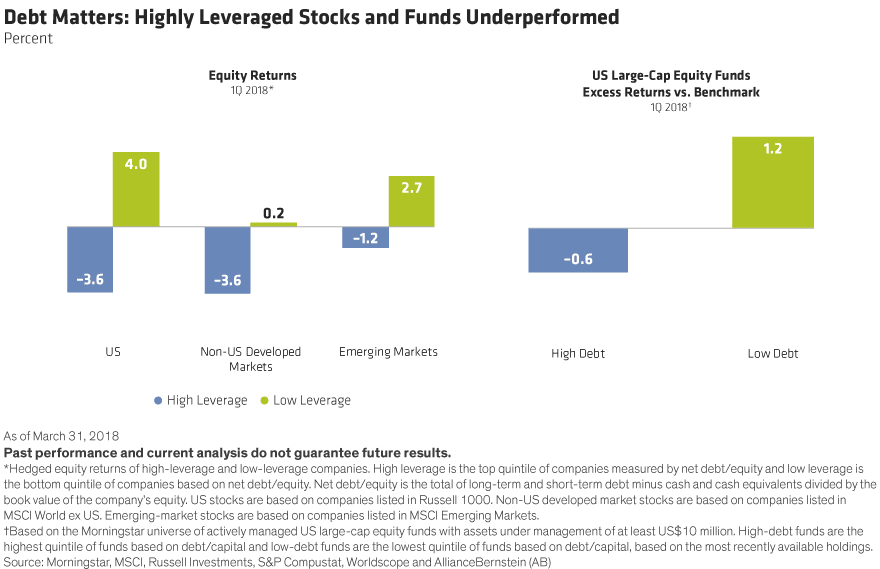 These performance patterns suggest that investors are paying much closer attention to company balance sheets, as those with more debt could be especially vulnerable to rising rates. Of course, it’s always important to scrutinize a company’s debt burden. But after a decade of historically low interest rates, companies that have borrowed too much could be especially vulnerable, while those with less debt could become more attractive.

The technology sector is a case in point. Technology companies around the world have a lot of cash on their balance sheets—and tech stocks outperformed the market during the first quarter.

Yet the underlying strengths of technology stocks were obscured by concerns about Facebook. Shares of Facebook tumbled in March amid revelations that it been imprudent with user data and may face tighter regulatory scrutiny. Sentiment soured toward US mega-cap technology and new media stocks known as the FAANGs (Facebook, Amazon, Apple, Netflix and Google).

Strong cash flows are the most important distinguishing characteristic of the technology sector, in our view. Even if inflation begins to surface, many companies will continue to invest in technology, as it creates new disruptive businesses, helps offset rising labor costs, improves efficiency and preserves profit margins in a more challenging market. It may be time for investors to consider technology stocks as a potential hedge against rising inflation.

Trade Wars? Cut Through the Noise

Perhaps the biggest evolving challenge to hit the markets during the first quarter was the growing threat of a trade war. In late March, President Trump unveiled plans to impose tariffs on $60 billion worth of Chinese goods, triggering a sharp drop in global stocks amid concerns that an all-out trade war could deliver a blow to the global economy.

It’s still too soon to say that the US tariffs will lead to an all-out trade war. Much will depend on whether the trade tensions remain limited to bilateral blows between the US and China, and to what extent potential retaliatory measures lead to escalation. If the US–China situation deteriorates, economic growth in both countries would likely get hit, which could drag down the global economy and jeopardize stocks in general. That said, we think investors should begin to investigate what types of companies, industries and countries could win or lose if an all-out trade war erupts.

For example, US technology groups with large and complex supply chains in China may face disruption as they are forced to find new sources for components. Other industries such as clothing could be forced to close Chinese operations, shifting sourcing to countries such as Vietnam and Indonesia. While these supply chains would ultimately adjust, there could be significant uncertainty and the potential for inventory shortages along the way, adding to investors’ worries.

What do these three developments have in common? First, they all represent a major shift in underlying long-term market foundations, from three decades of declining interest rates to a potential reversal of a longstanding favorable backdrop for world trade. Second, decades of growing trade and integration could reverse.

Inflation is a thread that ties everything together. Inflationary pressures are already rising, particularly in the US, as the slack in the economy that has lingered since the global financial crisis has narrowed. New tariffs could lead to higher prices, which would spur a faster increase in interest rates that would lead to greater differentiation in the performance of different sectors. This has already started to happen, as indicated in the performance of companies with higher debt levels.

This environment will put active equity investors to the test. In complex and changing market conditions, we believe that portfolio managers who demonstrate an ability to adjust quickly will be rewarded for their skill.