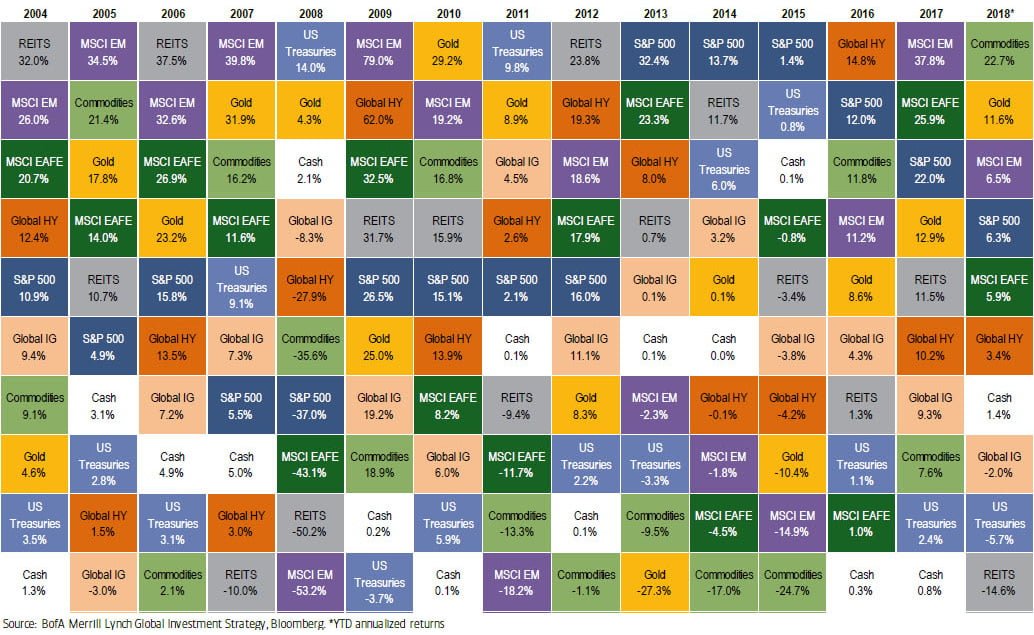 Is the commodity supercycle coming back from the dead?

For now, such a claim could perhaps be considered both bold and premature – but there does seem to be some compelling evidence that is mounting to back it up.

According to the most recent “Asset Quilt of Total Returns” put together by Bank of America Merrill Lynch, commodities are the top returning asset class of 2018 so far. The chart, which shows the total returns of asset classes over the years, has commodities at an annualized return of 22.7% year-to-date.

Right behind it is gold, which sits at 11.6% on an annualized basis:

Interestingly, commodities haven’t been on top of BAML’s chart since the years 2000 and 2002, which were at the beginning of the last commodity supercycle.

Here is how commodities have fared from 2000 to 2018, based on annual returns. If the commodity sector keeps the pace for the rest of 2018, this will be the best year for the asset class since 2003.

For various reasons, commodities have bounced back in the last three years.

The return of oil prices have helped to resurrect the sector. Ironically, the anticipated metal demand from renewable energy – which will be used to wean society off of fossil fuel consumption – is also a massive driver behind commodities right now.

Not only are base metals like copper, aluminum, and nickel essential for the “electrification of everything”, but lesser-known materials like lithium, cobalt, rare earths, vanadium, uranium, and graphite all play essential roles as well. They do everything from enabling lithium-ion batteries and vanadium flow batteries, to making possible the permanent magnets that generate electricity from wind turbines.

The environment for investing in commodities is the best since 2004-2008.

Not surprisingly, here are how metal and energy commodities have performed since January 1, 2016:

Some minor metals, like vanadium, have increased by over 400% in price in the last two years. That begs the question: how much room could there possibly be for price appreciation left?

As Frank Holmes of U.S. Global Investors described in a recent post, the last boom was so prolific that investing in an index tracking commodities (such as the S&P GSCI) in 2000 would have resulted in the equivalent of 10% annual returns for ten years.

He also shared this chart, which shows the ratio in value between commodities and the S&P 500:

In other words, commodities seem to be more undervalued than any time in the past 20 years, at least relative to equity indices such as the S&P 500.

Even if the above ratio comes back up to the median of 3.5, it’s clear that there could still be vast amounts of opportunity available in the sector for investors.