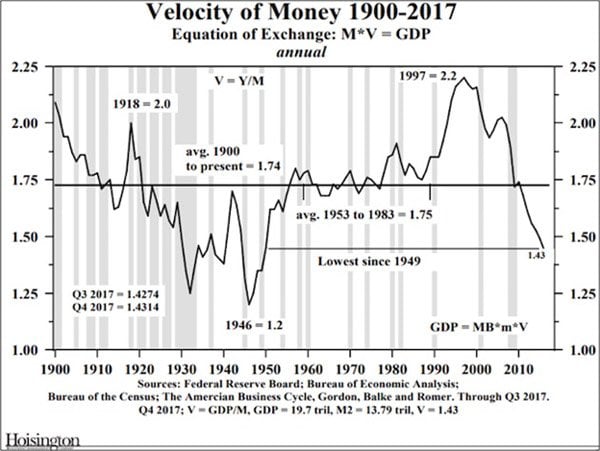 Just like the weather, financial markets go through cycles.

Most years, weather doesn’t change suddenly. We get some transition time between the colder and warmer seasons. I fear we may be in an economic transition right now. And it may not be in the direction of the springtime or summer we would prefer.

But before jumping to conclusions, let’s look at a series of telling charts that I gathered here.

He is one of the few who watch the velocity of money, which has been falling for the last 20 years. This is not the stuff that GDP-growth dreams are made of.

You may be asking, what exactly is the velocity of money? In simple terms, it’s the frequency with which the same dollar changes hands when the holder buys something.

Higher velocity means more economic activity, which usually means higher growth. So it is somewhat disturbing to see velocity now at its lowest point since 1949, and at levels associated with the Great Depression

The last decade saw an average of only 1.9% annual GDP growth. I think we can attribute the slow growth to the ongoing fall in the velocity of money.

Velocity has been falling for quite a few years now, so this indicator by itself doesn’t signal imminent doom. But the further below average it drops, the more likely problems become.

Combine this trend with the late-cycle tax cut and the Fed’s tightening and this is an indicator to watch.

Further, velocity is related to inflation. If inflation goes up, money velocity picks up. But it shows no sign of doing so, which is one reason Lacy sees little inflation risk.

Debt is another big issue for Lacy.  Debt is like addictive drugs. And as with most drugs, the dose needed to achieve the desired effect tends to increase over time.

The next chart shows the additional economic output (GDP) generated by each additional dollar of business debt in the US. 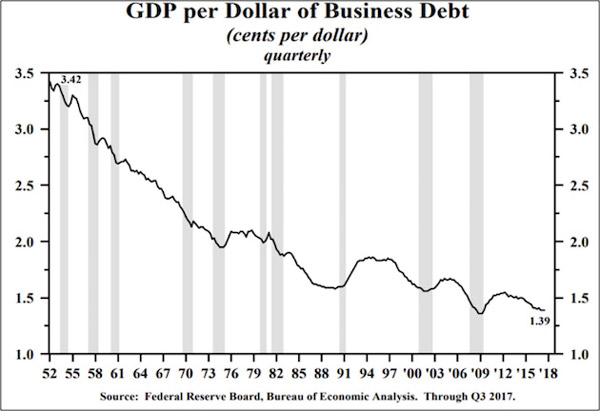 US Debt has become steadily less stimulative over the last several decades. But focus specifically on the lower right area.

We saw the debt-growth effect rise, but only for a couple of years as the economy came out of recession. It began sliding again right about the time Ben Bernanke said the Fed would begin “tapering” its QE bond purchases.

Now it’s almost back down where it was in the trough of the recession. That’s not encouraging.

Next up are charts from Louis Gave, one of the Gavekal founders and a human research machine.

First, we have this chart of the 30-year Treasury yield since 2010. Note the very consistent downward trendline. Note also what it did in early 2018. 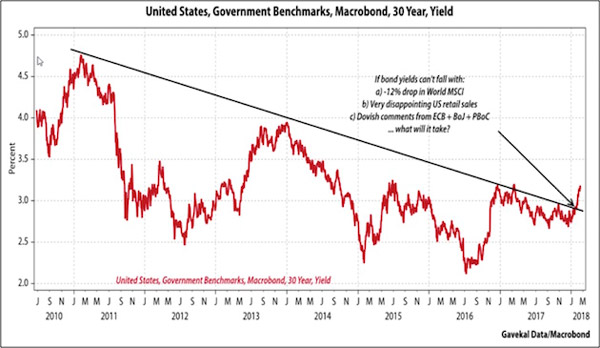 It was no great surprise that long-term bond yields fell steadily as the Federal Reserve was buying long-term bonds. Nor is it surprising that yields should rise now that the Fed is withdrawing from that market.

But other things are happening, too, as Louis notes in the chart. If a US economy that is growing slowly at best, along with continued stimulus from Europe, China, and Japan, isn’t enough to keep US bond yields from rising, what will?

And if yields rise a great deal more, recession odds will rise, too. By definition, recessions are deflationary.  And we will see interest rates decline in the developed world when recession comes again.

That prospect is very real, given how low rates already are.

Our growing government debt is part of the problem. Louis graphed it as a percentage of GDP going back to 1966. 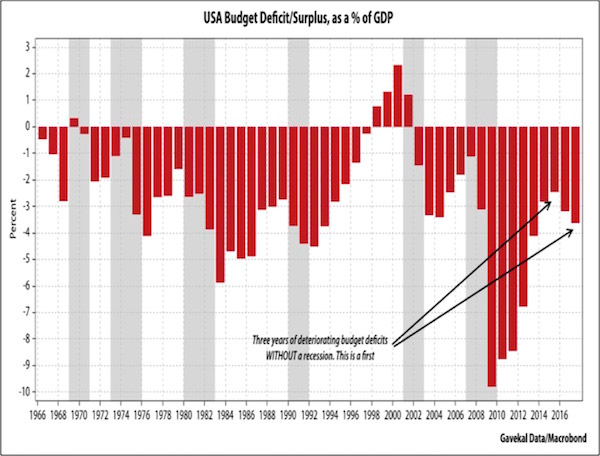 Over the last half-century, higher deficits have been associated with recessions. After recessions end, the deficit shrinks, and occasionally (e.g., after Clinton and Gingrich cut their deal) we get a surplus.

That’s not happening this time. Deficits are growing even without a recession.

On the positive side, today’s annual deficits are nowhere near 2009–2012 levels. That’s encouraging. But in the next recession, tax revenues will fall and spending will increase.

That will swell the annual deficit and add north of $2 trillion to the national debt each year. We’re using up our breathing room, and that will be a problem—sooner or later.

This next chart comes from Jeffrey Gundlach of DoubleLine Capital. It may be either good news or bad news, and even Gundlach isn’t sure which. 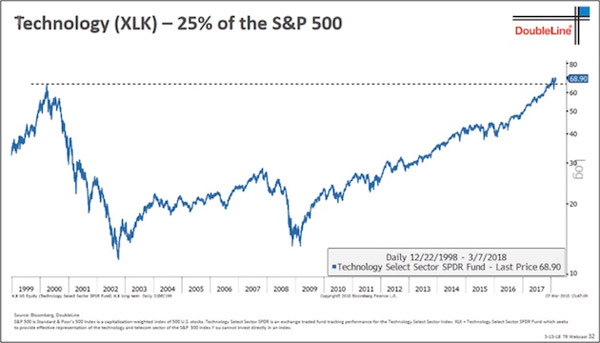 The chart shows the XLK Technology ETF, which consists of the S&P 500 Index technology components. That dotted line shows that XLK only recently surpassed the high it set back in the year-2000 tech boom.

If you are a technical analysis fan, this performance might seem bullish—we have a breakout from long-term resistance. But is it really?

For one thing, XLK is not now the same collection of stocks as XLK was then. Apple was a smaller component in 2000, while Facebook and others weren’t even public yet. Dell was a big player in that period but is now private and delisted.

So is the comparison really valid? Maybe not. And even if it is, I’m not sure we can call this a convincing breakout yet. And given the last two weeks, it may not become one.

Gundlach also showed a chart for XLF, a financials ETF, and it has a similar pattern. If neither technology nor financials can keep rising from here, this bull market may be in for a long pause and possibly a breakdown.

Take heed if you’re exposed to those types of stocks in particular.

Finally, let’s wrap up with two charts from Grant Williams. Here’s a chart summarizing US monetary policy and how it evolved over the years. 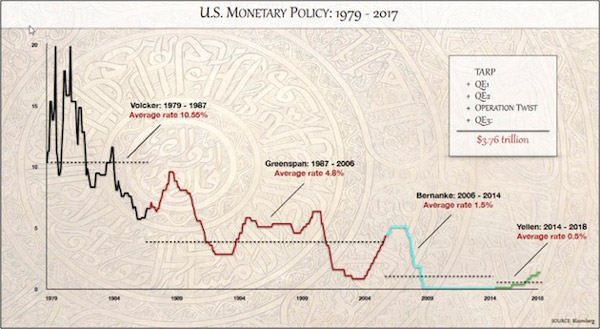 Younger readers will probably find those Volcker years incomprehensible. 20% overnight rates? Yes, it happened. I remember having a bank line from which I borrowed at 20%. And was happy to get it. And rates were 10% or close to it for more than five years.

Hard to imagine now, even for us graybeards who lived through that time.

In any case, I suspect Jerome Powell will break the pattern of each chair’s delivering lower rates than the last. Yellen’s 0.5% average will be hard to beat—though if we get into a recession, he may well try.

The last chart adds the 10-year bond yield to the chart above. It looks similar to Louis Gave’s 30-year yield chart but goes back further. Here again we see a nice downtrend that appears to be getting broken. 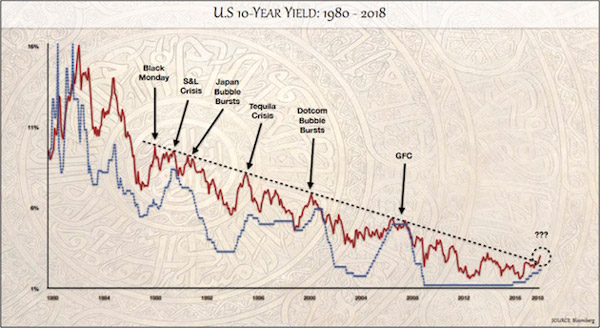 Ominously, you can see from Grant’s labels with arrows that peak yields tended to correspond with crises. If the current breakout persists, it is probably going to get its own label… and I bet we won’t like it.